After retiring from rewarding careers in the ice cream industry, MU graduates Wendell and Ruth Arbuckle wanted to return something of value to MU.

In 1987, they established an endowment to support ice cream research on the MU campus and in 1989, Buck’s Ice Cream Place opened for business.

History of ice cream research at the University of Missouri 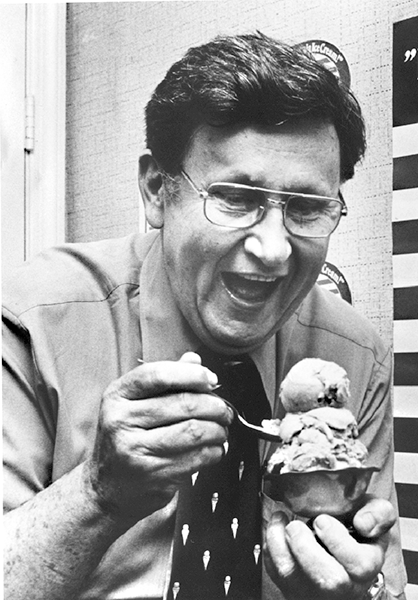 Ice cream research and the University of Missouri goes back a long way. One of MU’s first research bulletins, No. 128 published in 1929, described the effects of pressure in the manufacture of ice cream.

From developing more efficient production methods to creating low-fat ice creams, MU has been continuously contributing to the science of frozen desserts — taking the products of Missouri dairy herds and making treats for kids to enjoy during their summer school breaks.

Ice cream teaching and research got hot at Mizzou in the early 1920s with the arrival of Professor William Henry Eddie Reid. Widely recognized for his ice cream research, Reid and his graduate student, Wendell Arbuckle, wrote scholarly articles on the texture of ice cream based on results from microscopy research.

Ice cream research at Mizzou became recognized in 1940 when Professor Wendell Sherwood Arbuckle published his dissertation: “A microscopic and statistical analysis of texture and structure of ice cream as affected by composition, physical properties and processing methods.” An endowment by Arbuckle in the late 1980s led to a renovation of the pilot plant and a shift in focus of the dairy research to ice cream.

Arbuckle went on to become “Mr. Ice Cream” and taught at the University of Maryland. He became a consultant for Baskin Robbins Ice Cream Company. Reid retired in 1964 and was replaced by Robert Marshall, who joined the Dairy Husbandry Department in 1960. 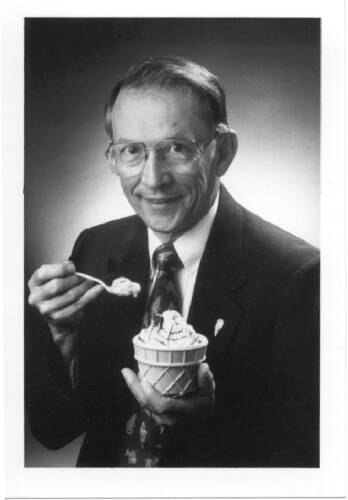 Marshall, and Professor Dean Shelley, envisioned not just an ice cream in the school colors but a gold ice cream with the stripes of a tiger. That would be really cool, they thought. One problem, no one had ever formulated ice cream in such a way to look like tiger stripes.

Initially, the pair hit a few dead ends. They tried orange sherbet and licorice. Not bad looking, but the combination tasted awful.

After various combinations, they settled on gold-colored French vanilla for the ice cream base and dark Dutch chocolate for the stripes (89 and 11 percent by volume, respectively). The trick was making realistic-looking tiger stripes. After experimentation the variegating pump, its volume cut back by two-thirds and operating at its minimum capacity, swirled the chocolate into the French vanilla to create a realistic tiger stripe.

Now the signature product, Tiger Stripe is tasty tradition at Mizzou student and alumni events, such as the annual Tiger Walk to welcome freshmen.

A Research, Teaching and Service-Oriented Laboratory

Buck’s Ice Cream Place is just the most visible part of the total program. Behind the cheery store front is an integrated research, teaching and service-oriented laboratory where food science students learn everything about ice cream from maintenance and inventory to manufacturing and retail.

The perfect combination of the Arbuckle’s generosity, the students’ hard work and the direction of dedicated ice cream veterans gives us all at least 15 more delicious reasons to be proud of our University.

Buck’s Ice Cream is produced by the MU College of Agriculture, Food and Natural Resources.