This list recognizes world-class researchers selected for their exceptional research performance, demonstrated by production of multiple highly cited papers that rank in the top 1 percent by citations for the field and year.

A new pilot grant program led by Senior Associate Dean Bill Fay announced 30 awards to School of Medicine (SOM) investigators, including multiple awards to MU Biochemistry faculty. Four biochemists are principal investigators on a TRIUMPH award, and four others are co-investigators. This program is part of the SOM’s initiative to transform research at MU by promoting advances in translational research and precision medicine. An additional key aim of TRIUMPH is to promote the success of the NextGen Precision Health Institute, scheduled to open in fall of 2021. The awards were announced March 2021.

The maximum size of the awards is $100,000, covering a period of two years. The Biochemistry-associated faculty and award titles are:

Two University of Missouri faculty were among 15 individuals recently named Society for the Study of Reproduction (SSR) Distinguished Fellows. R. Michael Roberts, Chancellor’s Professor with appointments in animal sciences and biochemistry, and Thomas Spencer, Curators’ Distinguished Professor of Animal Sciences, were both honored. This is the inaugural year of the program.

The CAFNR Office of Research recently recognized 10 faculty members as Drivers of Distinction. The honor was given to the faculty members, listed below, who had the highest total shared credit research expenditures over the past 10 years (2011-20).

Each Driver of Distinction will receive a trophy and certificate from CAFNR Vice Chancellor and Dean Christopher Daubert.

Six University of Missouri Interdisciplinary Plant Group (IPG) PhD students and postdocs have been selected for “Summer CROPS Talks,” a webinar series for plant science researchers. This new series extends from a developing cooperation between the Center for Plant Science Innovation at the University of Nebraska-Lincoln, the Plant Sciences Institute at Iowa State and the IPG. The series provides a great opportunity for graduate students and postdocs to engage with their peers at the other institutions.

The platform provides an opportunity to share graduate student and postdoc research with the plant science community. The format will be a 20-minute Zoom presentation with 10-minute question and answer session.

The Mizzou students who will participate:

David Korasick (Tanner Lab) was recently awarded a United States Department of Agriculture National Institute of Food and Agriculture (USDA NIFA) postdoctoral fellowship to pursue his research on the molecular basis of soybean cyst nematode infection resistance. Korasick’s work is supervised by Jack Tanner, professor of biochemistry, and Melissa Mitchum (University of Georgia), his mentor and co-mentor, respectively. Soybean cyst nematode (SCN) is the most detrimental and costly pathogen that affects soybean production in the U.S.; more than $1 billion is lost annually due to SCN infection. The project focuses on the soybean metabolic enzyme serine hydroxymethyltransferase 8 (SHMT8), and how changes in SHMT8 from an SCN resistant plant line confer pathogen resistance. Korasick combines protein biochemistry, protein biophysics and X-ray crystallography approaches to tackle this problem. Korasick stated, “Our goal is to gain the information through these studies necessary to engineer a new line of soybeans with durable resistance for use in agriculture.” 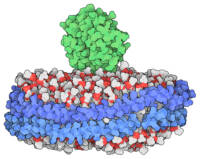 Work of former graduate student Tara Marcink and Steven Van Doren, professor of biochemistry, is featured as the “Molecule of the Month” in this month’s issue of PDB-101. The molecule featured is a nanodisc, which is used to conveniently package a small piece of membrane for experimental studies. This important molecule is playing a big role in a recent revolution in structural biology. PDB-101 is the educational portal of the Protein Data Bank.

The University of Missouri System has announced $20.5 million in awards for its first round of research funding to address grand challenges, foster system-wide collaboration and enhance faculty research through new equipment. This is part of the System’s plan to strategically invest $50 million in research and creative works over the next five years, announced last fall. Researchers from CAFNR are part of approximately $11 million of the funding, along with colleagues from other MU colleges, and, in one case, from UMKC. Three of the funded projects are led by CAFNR faculty.

“I am very proud that CAFNR was so well represented among the funded projects,” said Shibu Jose, CAFNR’s interim associate dean for research. “Our research is vital to the top priorities of the UM System, and is also looking to solve the most important issues in our world today. This just shows the extremely high level of research happening in our college and its relevance to the people of the state and beyond.”

The System received more than 115 proposals for this year’s strategic investments, 19 of which were funded. Eleven million is provided by the UM System, and the remaining funds are from the four universities.

Project selection looked to support the system’s highest priority, the NextGen Precision Health Initiative and Institute, in addition to funding projects that showcase collaboration across the four System campuses, according to the UM System.

This proposal aims to acquire a Talos Arctica™ Cryo-Electron Microscope (EM) to equip researchers with the leading cryo-EM technology to investigate fundamental biomolecular interactions and enable pharmaceutical development, but will also have remote operation capabilities for scientists throughout the state who prefer to mail samples rather than travel to Columbia. In the coming months, University leaders will coordinate with Dr. Chapman and other faculty colleagues to leverage this investment and develop a center for excellence in electron microscopy with donors and industry partners.

Technological advances in DNA sequencing have revolutionized biomedical science and health care approaches, but constant technological advances require continued investment. This proposal aims to maintain MU’s excellence in research by providing researchers with the Illumina®NovaSeq system, the latest disruptive technology that offers quantum enhancements in speed, volume and quality of sequencing at a significantly lower cost – an upgrade that will allow MU’s sequencing capabilities to match or exceed those of the top research universities around the world.

Problems during early pregnancy can cause infertility, miscarriage and other complications, but this crucial period is poorly understood because it is impossible to obtain tissue samples from pregnant women in the first trimester. This project aims to develop the first model of human implantation in a laboratory dish without using human embryos, opening new possibilities to study early pregnancy, develop reproductive therapies and solve fertility problems that affect 50% of all women worldwide during their life.

The traditional model of a central supercomputer resource that serves the majority of campus users falls short of the new reality in which collaborative, interdisciplinary and highly data/computation-intensive resources are not always within campus boundaries. This project will support a “community-scale” research computing approach that will advance systemwide research and education collaborations and seamlessly integrate local and remote resources, directly supporting the NextGen Precision Health Initiative in addition to many other research collaborations across the UM System. This center will be the first of its kind in the UM System, capable of analyzing and storing massive datasets, bringing new capabilities to our researchers and students in an era of the rapidly growing demand for data scientists. In the coming months, university leaders will coordinate with Drs. Rao and Calyam and other faculty colleagues to leverage this investment with donors and industry partners.

Missouri is the perfect environment for mosquitos, fleas and ticks to infect livestock and humans with the horrific diseases caused by Zika, West Nile and other viruses. In response to recent major outbreaks in humans and the lack of understanding about these diseases, this research team will study insect vectors to understand the mechanics that drive the spread of disease and develop new approaches for diagnosis and treatment.

Brenda Peculis, associate professor of biochemistry, received the 2019 MU Connect Champions Faculty Award from the Provost’s MU Connect Early Alert Advisory Board. Peculis was honored at the Celebration of Teaching Awards Luncheon in May. The MU Connect Champions Award recognizes excellence in the efforts of faculty, staff, teaching assistants and students involved in using MU Connect and the Early Alert tools to meaningfully improve teaching and learning, as well as student success at Mizzou.

“Dr. Freyermuth is a true example of a student advocate,” said Laura Friedrich, CAFNR coordinator of student services. “If a student has questions, wants to explore the opportunities in the College or is just plain lost in their academics, I know we can always forward the questions to Dr. Freyermuth. The student will get their questions answered and have a positive outlook on how to move forward.”