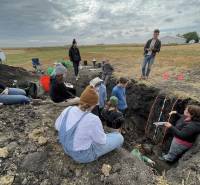 Each team in the competition practiced at various soil pits throughout the area to gain an understanding of soils and landscapes. The individual portion took place in the morning and team competition took place in the afternoon. Students were tasked with correctly identifying, evaluating, classifying and describing soil profiles in previously unseen soil pits and also rated the soils for land use.