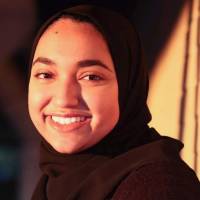 In a tradition dating back to 1917, small groups of students were selected (or “tapped”) by their peers to join one of MU’s six secret honorary societies. The six societies – QEBH, Mystical Seven, LSV, Mortar Board, Omicron Delta Kappa and the Rollins Society – honor new members for service, leadership and commitment to the Mizzou community. The new initiates’ identities are kept secret until Tap Day, when they were publicly revealed online. Each society also honor taps MU staff and faculty members who have contributed significantly to the university.