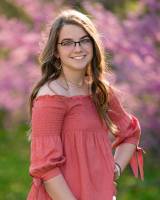 Krudop worked at a small animal veterinary clinic (and still does when she has time) and showed horses throughout her high school career. She has added to her animal sciences knowledge-base during her time at the University of Missouri through her studies in the Division of Animal Sciences. Krudop is also a member of the Pre-Veterinary Club and Mizzou Collegiate CattleWomen.

In addition, Krudop is part of the University Philharmonic Orchestra, where she plays the viola. She is also a member of the Tiger’s Lair, the official student cheering section for Missouri Tigers football.

“Parker has excelled in everything she has participated in so far in her college career, and I am certain she will continue to do so,” said Hannah Anderson, a junior studying agribusiness management and president of Mizzou Collegiate CattleWomen. “Her work ethic and commitment to achieving as highly as possible in everything she is involved in has translated into her college career. She is active in many clubs and works on the weekend. As part of Mizzou Collegiate CattleWomen, I know I can depend on her to be at all meetings and events. She is also willing to help plan and organize events in any way she can. Parker demonstrates every core value of the University and qualities of excellence associated with CAFNR in her academic performance and capabilities as an individual.”