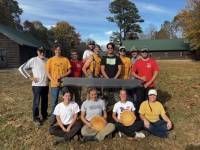 The Forestry Club sent 12 team members to a timber sports competition, known as a Conclave, in late October, coming home with first-place honors. The event was held at the Touch of Nature Outdoor Education Center and hosted by Southern Illinois University-Carbondale. Hank Stelzer, an associate professor in the School of Natural Resources, has helped guide the team and was in attendance during the event.

The team competed in double and single buck using a crosscut saw, pulp toss, ax throw, wood indentification, dendrology, DBH estimation and a special event, which composed of a race to obtain water, start a fire and boil the water. Along with the competition, MU students were able to connect with Conclave members from other school. Mizzou’s Conclave team is planning on attending a competition at a different university in the spring.