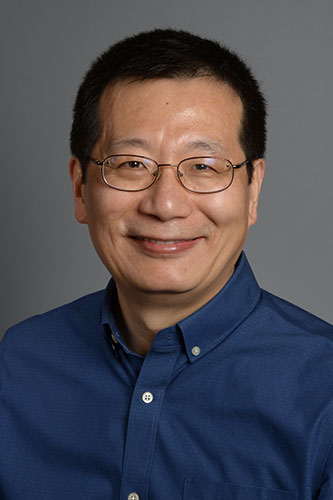 Shuqun Zhang’s lab is interested in the functions and underlying molecular mechanisms of MPK3 and MPK6, two highly conserved mitogen-activated protein kinases (MAPKs), in plant immunity and growth/development. He purified and cloned tobacco salicylic acid-induced protein kinase (SIPK) in the 90s when he was a post-doc in Dr. Dan Klessig’s lab at Rutgers. SIPK is the tobacco ortholog of Arabidopsis MPK6. After he started his own lab at the Department of Biochemistry, University of Missouri, his lab has been using a combination of biochemical, molecular, genetic, cellular, and omics approaches to understand the functions of MPK3/MPK6 cascade in Arabidopsis. He is also interested in the comparative analyses of MPK3/MPK6 orthologs in soybean and rice. His lab has published a number of high impact papers in the field, and he is a highly cited researcher (Thomson Reuters/Clarivate Analytics) in the past four years.

After the identification and biochemical characterization of pathogen- and defense signal-activated MPK3 and MPK6 in Arabidopsis or their orthologs in other plant species (reviewed in Zhang and Klessig, 2001), our research has been focused on acquiring genetic evidence to support their functions in plant immunity. The first step is the generation of gain- and loss-of-function genetic systems. To obtain the gain-of-function system, we first identified MKK4/MKK5, the MAPK kinases upstream of MPK3/MPK6, and generated a constitutively active variant, called MKK4-DD and MKK5-DD. It was discovered that long-lasting activation of MPK3/MPK6 by the expression of MKK4/MKK5-DD transgenes leads to hypersensitive response (HR)-like cell death (Yang et al., 2001; Ren et al., 2002). As a result, an inducible promoter was employed to control the transgene expression, which leads to the generation of an inducible gain-of-function DD transgenic system. This system was successfully used in most of our studies.

The quest for the loss-of-function system is much more difficult. At the time, we did not know that MPK3/MPK6 also play essential roles in plant growth and development. Attempts using RNAi approach failed to yield stable loss-of-function transgenic lines. After the identification of T-DNA insertional mutants of MPK3 and MPK6, we attempted to generate the double mutant by crossing, and found that mpk3 mpk6 double mutant is embryo lethal. We then generated a partially rescued mpk3 mpk6 double mutant system using a steroid-inducible promoter-driven MPK6 transgene (genotype: mpk3 mpk6 GVG-MPK6) (Wang et al., 2007). This system allowed us to acquire loss-of-function data to support the functions of MPK3/MPK6 in a number of plant defense responses including pathogen-induced ethylene biosynthesis, phytoalexin induction, and defense gene activation. However, we could not test the pathogen resistance using this partially rescued mpk3 mpk6 plants because GVG-MPK6 transgene cannot fully rescue the mpk3 mpk6 double mutant, and mpk3 mpk6 GVG-MPK6 seedlings are arrested in their growth and development and cannot survive in soil.

Recently, we developed a chemical genetically rescued mpk3 mpk6 double mutant system using chemical sensitized MPK3 and MPK6 variants (MPK3-TA and MPK6-YA) driven by their native promoters. They were named MPK6SR (genotype: mpk3 mpk6 MPK6-YA) and MPK3SR (genotype: mpk3 mpk6 MPK3-TA). MPK3-TA and MPK6-YA variants are fully functional in the absence of NA-PP1, a specific inhibitor of the sensitized kinase variants, and the plants can grow and develop normally. In the presence of NA-PP1, the activity of MPK3-TA or MPK6-YA is inhibited, giving rise to activity null double mutant. Using the MPK3SR and MPK6SR plants, we demonstrated that MPK3 and MPK6 play essential functions in both PAMP-triggered and effector-triggered immunity (Su et al., 2017; Su et al., 2018).

In the process of obtaining the loss-of-function MPK3/MPK6 system for function analysis of these two MAPKs in plant immunity, we found that they also play essential roles in various processes of plant growth and development, from gametogenesis, to fertilization, embryogenesis, seed formation, morphogenesis, and abscission. They function downstream of multiple receptor-like protein kinases (RLKs) including HAE/HSL2, ER/ERLs, and SSP in response to their ligands, IDA, EPFs/EPFLs, and ESF1, respectively. Plants have expanded families of RLKs with more than 600 members in Arabidopsis. Many of them have been shown to play essential roles in plant growth and development. We are studying additional RLKs upstream of MPK3/MPK6 cascade in plant growth and developmental processes.

In summary, MPK3 and MPK6 play essential functions in plants throughout their life cycle. Similar patterns are emerging from studies of both plant growth/development and defense, consistent with a role of MAPK cascades as molecular switches that connect the cell surface receptors/sensors and intracellular events. MAPK activation is triggered in response to receptor sensing of their ligands, either endogenous or exogenous, which leads to the phosphorylation of MAPK substrates. The diversity of MAPK substrates, together with their differential spatiotemporal expression patterns, gives MPK3 and MPK6 enormous power to control a diverse variety of biological processes.