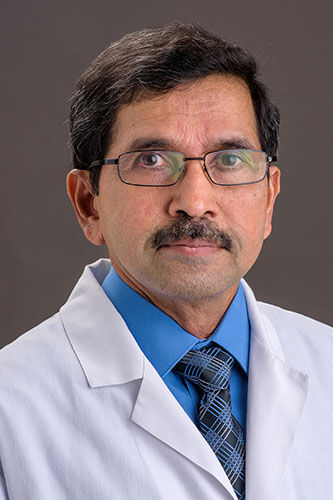 Structure-function of crystallins, role of ocular proteases and molecular basis for cataract development.

The lens of the eye is an excellent model for studying the effects of aging. The lens is primarily composed of long-lived highly stable proteins called crystallins. The crystallins account for approximately 95% of lens proteins. There are three types of lens crystallins: alpha, beta and gamma. The normally transparent lens often gradually becomes cloudy with aging, leading to cataract formation. Cataract is a major cause of blindness worldwide. By age 80, more than half of Americans either have a cataract or have had cataract surgery. Cataract primarily develops as a result of extensive modification, aggregation and precipitation of the lens crystallins. In our studies of the molecular mechanisms of cataract formation, we are investigating the role of cellular enzymes called proteases and crystallin-derived peptides in cataractogenesis and the structure and function of the major lens crystallin, alpha-crystallin.

Every cataract lens analyzed thus far in laboratories across the world has exhibited evidence of proteolysis (the degradation of crystallin proteins). However, the specific proteases responsible for the proteolysis of lens crystallins are yet to be characterized. Using specific peptide substrates that mimic the in vivo cleavage sites in crystallin, we have demonstrated in lens extracts the presence of proteases that may be responsible for the breakdown of lens proteins. These studies will enable us to develop strategies to control the crystallin degradation in vivo, which may eventually lead to the development of interventions for age-related cataract formation.

Alpha crystallin is an ologomeric protein with a molecular weight of about 800 kDa. It is formed by the subunits A and B, each with a molecular weight of 20 kDa. These subunits have high sequence homology to small heat shock proteins. They display chaperone-like properties. The chaperone-like properties of alpha-crystallin likely plays significant role in preventing the protein aggregation and light scattering that are associated with clouding of the lens, thereby helping to maintain lens transparency. Studies in our laboratory are directed toward the understanding the chaperone-like activity of both A and B subunits of alpha-crystallin. We have also chemically synthesized two peptides, called mini-alpha A-crystallin and mini-alpha B-crystallin, and have shown that these peptides possess the anti-aggregation properties of molecular chaperones. The availability of mini-alpha A and mini-alpha B gives us an opportunity to investigate the structural requirements of the chaperone site as well as the conformational specificity (structure or shape) of target proteins during chaperone action.  We are also using peptide chaperones to stabilize mutant crystallins and denaturing proteins which otherwise aggregate and precipitate. These studies may lead to the development of peptide chaperones as therapeutic agents.