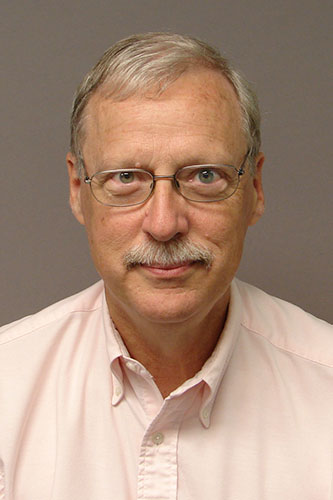 Our laboratory uses combinatorial biochemistry to study problems related to the origin of life and to developing new ways to prevent infectious disease in humans, domestic animals and plants. Combinatorial biochemistry recapitulates Darwinian evolution on molecules. In the first step (variation) we make large libraries of random nucleic acid or peptide sequences. In the second step (selection) we separate those sequences that have a desired property such as the ability to bind another molecule or cell. In the final step (reproduction), we use chemical or microbiological means to grow these molecular species. After a limited number of steps, it is possible to isolate molecular populations, all of which have the desired property. Selected molecules that bind to a target are called aptamers (from the Latin aptus, fastened or fitted). We have applied these technologies to two problems: the origin of the RNA world, and ways of finding new antimicrobial molecules.

The RNA world and the origins of life

We are interested in the mechanisms and selective forces by which RNA enzymes (ribozymes) evolve. This study has implications for the origin of life, and also for the technology of building new ribozymes for therapeutic or other uses.

There are two ways of selecting a large ribozyme from a collection (library) containing many RNAs. The first way is to make a library of very long RNAs. This is difficult to do chemically. The second way is to make a library that contains many short pieces and put them together to make a larger catalyst. We are concerned with this second mechanism which we have termed accretion.

The accretion mechanism proposes that there are three classes of small RNAs: catalytic active sites, activators and all the rest. Accretion requires that an activator and an active site meet transiently, and that the complex leads to a covalent association between the two species to form a more active ribozyme.

The accretion mechanism has its own difficulty: how the pieces get together in the presence of all the rest. It’s a little like meeting your true love in Times Square on New Years’ Eve. If there’s only one person who can fill your dreams, the odds of meeting him or her are very low, simply because there are so many other people there. On the other hand, if you’re not too choosy, there are a large number of possibilities. It’s the same for activator molecules: if there are only a few, then, ribozymes would never meet their activator by random chance before they were degraded. But if there are many possible activators, one or more of them would meet with the ribozyme during its lifetime in solution, and the two could get together.

We are evaluating how many activators exist in a collection of random RNA molecules. We use the methods of combinatorial biochemistry, an area emphasized by a number of researchers at MU. Our experiments indicate that a ribozyme can be activated by many RNAs, as predicted by the accretion mechanism . This in turn supports the “RNA world” model for life’s origin.

We can apply the same principles to finding molecular species that can inhibit the growth of infectious microorganisms. Our work has mostly focused on inhibiting the life cycle of Phytophthora, a pathogen that infects a variety of plants. For example, P. infestans caused the Irish potato blight in the 19th century, and another Phytophthora species is causing widespread disease in California oaks.

Phytophthora capsici infects plants like tomato, squash and eggplant. It has a complex life cycle that starts from a dormant spore in the soil. When the field floods, the spores develop into a swimming form, called a zoospore, that swim to the growing root tips of susceptible plants. There they form a cyst that then inserts a germ tube into the plant. The germ tubes spread further into the plant, choking it.

We have identified peptide aptamers that cause the zoospores to encyst without a plant being present. Our current work is directed to developing the technology for expressing these peptides in plants, thereby leading to pest resistance.

Similar strategies can be used to find molecules that interfere with the growth of a large number of pathogens, whether they infect people, plants or animals.

Looking Back 40 Years — And Beyond
Double Service Honor