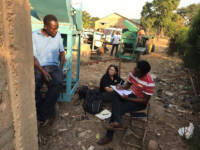 Kerry Clark, director of CAFNR International Programs, and two collaborators in Ghana have developed an inexpensive multi-grain thresher for poor smallholder farmers in Africa. It is common for women on small farms to “thresh” soybean grains from the mature plants by beating the plants with sticks to remove the beans from the pods. It would take up to two weeks to separate the grain from plants from one hectare (2.2 acres). With the newly developed thresher, the same task can be completed in 4 hours or less, increasing the yield of good seed by 35 percent and allowing the women to devote time to higher-value activities.

The thresher design has already received a second-place award of $10,000 at the American Society of Mechanical Engineers Innovation Showcase and the developer, Jeffrey Appiagyei, has been invited as one of 12 innovators to the Impulse Morocco Accelerator Program, an international competition among top agriculture, mining, bio, material science, and nanotech startups from around the world. He will be competing for $250,000 of equity-free prizes and the chance to work directly with OCP, the world leader in the phosphate markets.

This project is a significant outcome from the Feed the Future Soybean Innovation Lab, led by the University of Illinois. MU is a leading collaborator.