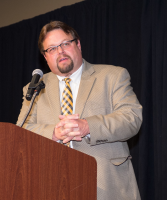 Loyd Wilson, who received a bachelor’s in animal sciences from CAFNR in 1986, has been honored with the 2020 Past President Award from the CAFNR Alumni Association. Wilson, who also received an MPA in Public Administration from Mizzou in 2005, served as president of the Association over the past year. He is director of administration for the Missouri Public Service Commission and has served as deputy director for the Missouri Department of Agriculture.

“Loyd is a highly involved member of the Board of Directors currently serving as Immediate Past President as his 7th year on the Board. Loyd is extremely knowledgeable and networked not only within the CAFNR family, but also in the agriculture industry itself,” said current President Stacey (Wood) Follis. “Much like other Directors, Loyd is highly invested in the success of our organization. He is very thoughtful in his approach to discussion and is evident he wants others to be heard. During his tenure we reached the highest fundraising year in the history of the organization.”

“It was a pleasure serving with Loyd on the CAFNR Alumni Board of Directors,” said Dustin Johansen, Vice President. “Loyd brought great leadership to our organization. I appreciate his passion for the university and the agriculture industry. He always demonstrated a calm demeanor, setting realistic expectations while still challenging our organization to grow in support of CAFNR students and alumni.”

One colleague shared this: “Those who know Loyd would agree this sums up his style: ‘Great leaders don’t set out to be a leader… They set out to make a difference. It’s never about the role – always about the goal.’”