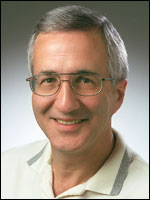 H.E. “Hank” Stelzer, associate professor in the School of Natural Resources and state forestry Extension specialist, received the 2020 Karkhagne Award for outstanding service to professional forestry and to the Missouri Society of American Foresters. The Missouri Society of American Foresters has selected the name and image of the Karkhagne to represent its highest honor in recognizing a forester for his contribution to forestry in Missouri.

The Karkhagne is a mythical beast that was reported to roam the forests of Missouri in the past century. It is covered by fur, feathers, scales and armor plate, has a diet of limestone section corners, and can quickly escape humans or other carnivorous pursuers by completely engulfing itself within the recesses of its own hip pocket. It is the subject of considerable folklore and legends about forestry in Missouri in the early 20th Century. The Karkhagne not only symbolizes the importance of Missouri’s forests to all creatures, but it also represents the unique and sometimes harsh nature of forestry at the turn of the last century.