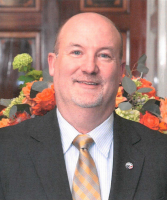 Glenn Blumhorst, who received a bachelor’s degree in Agriculture (Ag Econ emphasis) from CAFNR in 1985, was honored with the 2020 Citation of Merit Award from the CAFNR Alumni Association. As the President and CEO of the National Peace Corps Association, Blumhorst, who also received an MPA (International Development Management emphasis) from Mizzou in 1987, has transformed the 30-year-old non-profit into a robust, mission-driven social impact organization mobilizing 225,000 former Peace Corps volunteers, staff and 175 affiliate groups to act on their Peace Corps ideals. Before his current position, which he has held since 2013, he has had various roles with ACDI (Agricultural Cooperative Development International)/VOCA (Volunteers in Overseas Cooperative Assistance), including, most recently, Chief of Party and Country Representative in Bogota, Colombia, where he introduced a $61-million USAID program providing ethnic minorities access to the nation’s economic and political life.

Blumhorst and his wife, Catherine, a 1987 graduate of the Sinclair School of Nursing, served together in Guatemala as Peace Corps volunteers and then as missionaries. He grew up in Slater, Missouri, and has lived in or traveled to 65 countries and all 50 states.

“As a Mizzou alum myself, I have worked closely for more than two decades with the National Peace Corps Association. Glenn’s five years as its president have given this organization a bold new direction that has had a profound impact on the future of NPCA as a leading non-profit advocating voluntary public service in the United States and the world,” said nominator David Arnold, MA Journalism ‘70. “The University of Missouri can be proud of its role in preparing Glenn Blumhorst for a life of exemplary, impactful service.”

“Thanks to Glenn’s advocacy, the University of Missouri’s Returned Peace Corps Volunteer Program, building on the Paul Coverdell Fellowship Program, was singularly named as the top national Peace Corps program, with recognition given at the annual meeting of the Association of Public and Land Grant Universities (APLU), the only university in the nation to be recognized in this way,” said Brady Deaton, Chancellor Emeritus, University of Missouri. “His loyalty to his alma mater has guided his career and remains the bedrock of his continuing public service to our country. He has embraced the policy perspectives gained during his studies here at Mizzou, and continued to grow as a professional and contributing alumnus honoring the values of CAFNR and our university in every aspect of his work.”