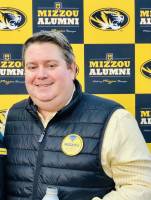 A graduate of Missouri Western State University with a degree in political science, Derek received the Great Griffon Award in 2021. He has also served as the district office director for U.S. Sen. Christopher “Kit” Bond and as coalitions director for Friends of Roy Blunt.

“Derek has a career in public service as an indispensable team member for both Senator Bond and Senator Blunt,” said nominator Robin Wenneker, UM System Curator. “He has a long tenure with both senators and was a long-standing strategist for them both. As the Deputy Chief of Staff for Senator Roy Blunt, Derek Coats has immersed himself in both the agriculture, civic and Mizzou communities.”

“He has always demonstrated keen insight, either from a policy or practical perspective,” said Richard Fordyce, former director of the Missouri Department of Agriculture and USDA Farm Service Agency administrator. “During my time as Director of the Missouri Department of Agriculture, our conversations were always two-way with him making sure the department was informed of critical issues affecting Missouri’s farmers and ranchers. His ability and timing to share thoughts were always perfect and greatly appreciated.”

“He is an outstanding supporter of both CAFNR and the Missouri agricultural industry,” Wenneker said. “While not a graduate of the University of Missouri, he has embraced his engagement with the college and the university.”

An honorary member shall be a person who is not a former student, but who, because of an exemplary interest in the University of Missouri’s College of Agriculture, Food and Natural Resources, is designated by action of the board of directors to be so recognized and honored.