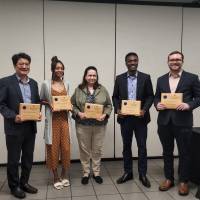 The second annual Division of Applied Social Sciences (DASS) Inclusion, Diversity and Equity (IDE) Awards Ceremony was held in mid-May and honored students, faculty and alumni. The awards were presented by the DASS IDE Awards Committee. Receiving awards were:

Aniyah Jones, a senior in hospitality management. Aniyah was identified by one of her professors as the perfect person to lead and revamp the National Society of Minorities in Hospitality. The organization was ready for a new beginning. Aniyah rose to the challenge and showed her leadership characteristics by promoting the organization with enthusiasm and recruiting new members. Under her leadership, the organization became a safe space for students. She did this by welcoming new members with open arms. She created a new board of executives and will mentor the next president of the National Society of Minorities in Hospitality after she leaves. In addition, Aniyah is also an active member of Minorities in Sports, another organization that promotes students’ wellbeing. Overall, Aniyah is always looking to meet and exchange positive connections with new people.

Barituka Bekee is a doctoral candidate in the environmental and development emphasis area of the Division of Applied Social Sciences. He has also obtained a graduate interdisciplinary minor in International Development and a graduate certificate in Society and Sustainability during his time at MU. Barituka is actively involved in the Mizzou community and has promoted the ideals of inclusion, diversity and equity through his service in several student organizations such as the DASS Graduate Students Association; the Deaton’s Scholars Program; the African Graduate and Professional Students Association; the International Christian Fellowship; and the Graduate Scholars of Excellence; among others. In addition to his work with organization, Barituka is a leader within the graduate student program. He is a point person for resources for all students and serves as an advocate and cheerleader for all. Barituka is originally from Nigeria in West Africa, and his career goal is to help enhance the capabilities and improve the well-being of poor and vulnerable populations through well-designed interventions.

Garren Wegener holds undergraduate degrees in business, Spanish and psychology, and is graduating with a master’s in agricultural and applied economics and a master’s in data science and analytics this summer, all from Mizzou. His research has focused on higher education efficiency and his university service has ranged from founding the University Libraries Student Advisory Council to serving as a member of the Judicial Peer Advisory Council. His IDE advocacy has focused on LGBT and Native American issues, particularly the development of detailed cost and community impact forecasts for a proposed expansion of the Land Grant Compact to include members of the Osage Nation, whose ancestors were forcibly relocated to a reservation in Oklahoma for the state of Missouri to sell their land, the proceeds from which seeded the University’s endowment. In his role as a graduate student, Garren was as a teaching assistant for multiple semesters. In this role, Garren went above and beyond what was expected of him to care for all student’s well-being and mental health. In addition, Garren has been an advocate for graduate student rights at the division, college and university level. Garren has accepted a Quantitative Analyst Presidential Management Fellowship with the U.S. Treasury’s Office of Financial Research and will be relocating to Washington, D.C., this summer with his partner, Alex, and their husky, Makita.

Dae-Young Kim is a professor of hospitality management and coordinates its graduate program. He joined the hospitality faculty at the University of Missouri in 2006. He was the recipient of Rotarian Ambassadorial Scholarship and also a best paper award winner in the several international conferences. He has published more than 170 peer-reviewed journal articles and conference proceedings. He serves on the Editorial Board Member of 5 leading hospitality and tourism journals. As an Asian immigrant, Dae-Young is sensitive to the challenges that ethnic minorities face in academia. Since he began his academic career at MU, he has made efforts to create a friendly and inclusive environment that is more inviting toward underrepresented racial and ethnic minorities, women and socioeconomically underprivileged students. Dae-Young has served as a faculty member to the Institute of Korean Studies and the advisor for the Korean student association.

Jenifer Pilz is the current coordinator of the School of Visual Studies Computer Labs. These include the Video Media Lab, Digital Story Telling Lab, Graphic Design Lab and the Photo Lab. She has been employed by MU for 15 years. She received her master’s degree in rural sociology from Mizzou in 2018. She currently serves as director of the Africa Hub, executive director of the Missouri Partners of the Americas, and is a member of Returned Peace Corps Volunteers Association of Central MO Board of Directors, and a Deaton Scholar. She served as Peace Corps Volunteer in Mali, West Africa, from 1992-94.