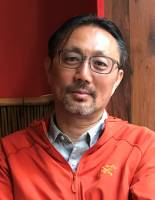 Chung-Ho Lin, associate research professor in the School of Natural Resources, received the 2020 President’s Award for Economic Development from the UM System. This award recognizes faculty for distinguished activity in meeting the University of Missouri’s goal of serving as an economic engine for the state and its citizens. Awardees demonstrate entrepreneurial innovation in using the classroom, outreach programs or the laboratory as vehicles for increasing or developing new economic activity in the state.

Lin’s primary research involves the use of plants, microbes and engineered enzymes for bioremediation, ecological restoration and development of bioeconomy. He is the lead scientist in the bioremediation program at the MU Center for Agroforestry, one of CAFNR’s Programs of Distinction.

Lin has spent the past seven years working to transfer research inventions to industrial applications. His collaborative efforts have successfully launched startups based on research in agricultural production, chemical remediation, biofuels and much more, according to the UM System. One example, Elemental Enzymes, is now a self-sustaining company active in six countries, holding more than 114 patents and employing 37 workers in offices in Missouri and Florida. In 2019, Elemental Enzyme’s products were applied to more than 7 million acres of crops in the U.S. alone, producing more than a billion additional pounds of corn.

Lin is also co-founder and lead scientist of Tiger Enzyme Solutions at the MU Life Science Incubator. Among other projects, the company is developing bioreactor technology to convert blood types to produce the universal donor type O. In addition to 17 patent applications that have generated revenue for MU, Lin collaborates with and strengthens the economic impact of regional biotechnology companies, including SCD Probiotics, Proviera Biotech, Kelly Foods Corporation, and AgriGro.