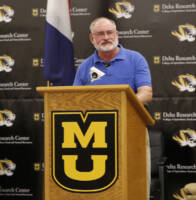 Brian Munzlinger, who received his bachelor of science in agriculture from Mizzou in 1978, received the Citation of Merit Award from the CAFNR Alumni Association at CAFNR’s 2019 Celebration of Excellence awards ceremony Thursday, April 11.