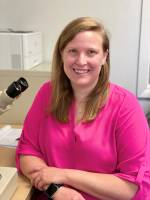 Kaitlyn Bissonnette, assistant Extension professor, plant sciences, has been awarded the Schroth Faces of the Future award from the American Phytopathological Society for her work in applied nematology and Extension nematology. This award is given to forward-thinking scientists within 10 years of earning their PhD who are perceived to be future leaders in the field.

Bissonnette coordinates a regional applied nematology project exploring the impacts of soybean cyst nematode (SCN) seed treatments on SCN reproduction and soybean yield across more than 12 US states and one Canadian province. This includes research at four MU research stations. In addition to building a foundation for applied nematology trials that have bridged the gap between nematologists and plant pathologists across North America’s soybean growing states, she has played a pivotal role in the development and leadership of the national SCN Coalition. Her Extension and outreach efforts as part of the SCN Coalition have not only included hands-on work with Missouri soybean growers, but also has reached a global scale with an estimated media aggregate readership of 4.5 million, specifically in reference to SCN, since January of 2018.

Awardees are invited to present their work and speculate on the direction of their discipline at a symposium designed to acknowledge up-and-coming researchers who are shaping the future of their respective scientific discipline. The Schroth Faces of the Future Symposium takes place this year in early August at Plant Health 2021 Online.