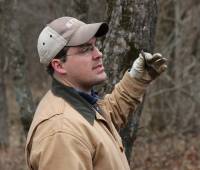 Knapp joined CAFNR in 2012 after earning his PhD from Clemson University. In addition to his duties as a professor, Knapp was named superintendent of the Baskett Wildlife Research and Education Center in 2015. Knapp has published 27 peer-reviewed journal articles during his time at Mizzou and has received $1.5 million in funding, with another $1 million under review. Knapp’s research interests are largely based on understanding the ecological effects of silviculture and synthesizing that information to better apply forest management practices to meet specific objectives.

“Every year since Dr. Knapp began as an assistant professor in 2012, he has contributed at every level in teaching, research and service,” said Shibu Jose, interim associate dean in the office of research and extension in CAFNR. “He has excelled in all of those areas, but most specifically in building up a nationally recognized research program with measurable outcomes. As an applied forestry scientist, Dr. Knapp’s research program has focused on silviculture and restoration of pine and hardwood ecosystems in the U.S. Specifically, he has worked on the longleaf pine ecosystems of the southeast U.S. and the hardwood forest ecosystems in the central U.S.”