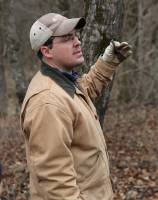 The Outstanding Young Alumni Award recognizes the accomplishments of individuals who have excelled in professional and civic accomplishments and have graduated from Purdue FNR within the last 15 years.

Ben Knapp, who earned his bachelor’s degree in forestry from Purdue in 2003, is an associate professor of silviculture in the School of Natural Resources at the University of Missouri. After completing his master’s and doctorate degrees at Clemson in 2005 and 2012 respectively, Knapp began teaching at Missouri as a tenure-track assistant professor. In 2018, he was promoted to associate professor. He teaches both undergraduate and graduate courses in silviculture as well as a course on Forest Fire Control and Use. Knapp also is the advisor to the University of Missouri Student Association of Fire Ecology, which aims to provide students knowledge of fire ecology as well as hands-on experience implementing prescribed fires and suppressing wildfires.

Knapp has authored or co-authored more than 50 publications and given more than 60 presentations at professional conferences. His research focuses mostly on the understanding of the ecological effects of silviculture and synthesizing that information to better apply forest management practices. In total, Knapp and his co-investigators have secured more than $2.3 million in external grant funding. In 2019, Knapp co-authored a publication with current FNR professor Mike Saunders regarding problems with regenerating desirable hardwood species in the eastern United States. He also joined with faculty at Purdue and the University of Kentucky to author a $10 million proposal to establish a White Oak Initiative to investigate the long-term use, regeneration and sustainability of the species.

In addition to his teaching duties, Knapp is the superintendent of the university’s Baskett Wildlife Research and Education Center. The Center, located 15 miles from the University of Missouri campus, is used for outreach, extension and recruiting. In addition to use for undergraduate and graduate student activities, it has also provided a home for forestry field competitions for high school Future Farmers of America chapters, meetings for the Society of American Foresters and even a maple syrup camp, which exposes students and K-12 teachers to educational and career opportunities in natural resources.

Professionally, Knapp is the communications coordinator for the silviculture working group of the national Society of American Foresters. He has previously been honored with two early career awards from the University of Missouri College of Agriculture, Food and Natural Resources (CAFNR): the 2018 Outstanding Early Career Teacher Award and the 2019 Early Investigator Research Achievement Award.