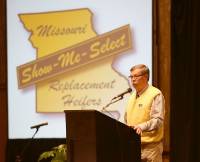 Al Kennett, New London, Mo., has received the 2021 True Tiger Award, given each spring by the CAFNR Alumni Association. Kennett served for 43 years as an Extension livestock specialist in northeast Missouri. He received both his BS (’66) and MS (’68) in Animal Sciences, and during his time at Mizzou was on both the meats and livestock judging teams and served as president of the Block and Bridle Club.

Kennett has received the Meritorious Service Award from the National Association of County Agricultural Agents; was inducted into the Missouri 4-H Hall of Fame; and was named Livestock Person of the Year by Mizzou Block and Bridle Club; along with numerous other recognitions.

“Al along with Eldon Cole piloted the Show-Me-Select program in the northeast and southwest regions of Missouri, respectively,” said Dave Patterson, Chancellor’s Professor, Division of Animal Sciences. “Their combined leadership and commitment to the program and the producers they served positioned the program to its recent recognition as one of CAFNR’s seven Programs of Distinction.

“Al’s support of CAFNR and MU exemplify what being a ‘True Tiger’ really means. His service to Missouri agriculture is matched with his commitment to CAFNR, Extension, Tiger athletics and the University of Missouri as a whole. Al’s support of the Division of Animal Sciences can be measured in many ways, but is perhaps best demonstrated by the number of students from northeast Missouri that Al recruits and encourages to attend MU.”

“Al has been very active in community and youth activities. In particular, for 43 years he coached 4-H livestock judging teams, with nearly half of them placing first or second at the state contest and moving on to compete at the national level,” said Bill Lamberson, professor and director, Division of Animal Sciences. “He serves on the advisory committee for the Mizzou Livestock Judging program and has been a fundraiser extraordinaire!

“Through his volunteerism, Al Kennett has given much supporting Mizzou and especially CAFNR, and genuinely deserves recognition as a True Tiger.”

The True Tiger Volunteer Award recognizes an individual who has made significant contributions to the College of Agriculture, Food and Natural Resources through volunteer efforts and a sincere dedication to the university.