Founded in 1885, Marching Mizzou is the marching band for the University of Missouri. With 350 members, the band features students from nearly every major at Mizzou – including numerous students from the College of Agriculture, Food and Natural Resources. For the first time in the band’s history, Marching Mizzou will participate in the Macy’s Thanksgiving Day Parade. Support Marching Mizzou by tuning into the parade, which will run from 9 a.m. to noon on Thursday, Nov. 24.

Just two days into her first marching band experience as a student at Pattonville High School (Maryland Heights, Mo.), Kesley Kobielusz was ready to call it quits. Kobielusz had been playing the clarinet since she was in fourth grade but wasn’t exactly a fan of marching band early on.

“I just remember talking to my mom in the car after practice and telling her that I didn’t want to continue with marching band,” Kobielusz said. “I didn’t enjoy it at all. My mom did encourage me to stick it out – and I’m obviously glad she did. It’s crazy to think where I am now.”

Kobielusz, a senior environmental sciences major, is in her fourth year as a member of Marching Mizzou. She has played the clarinet throughout her time in the band.

“Being a member of Marching Mizzou is so much fun,” Kobielusz said. “When that fact comes up during a conversation, I feel like people are always really excited to talk to me about what instrument I play and what it’s like to be part of such of historic band. It’s nice to know that we’re appreciated throughout this community.” 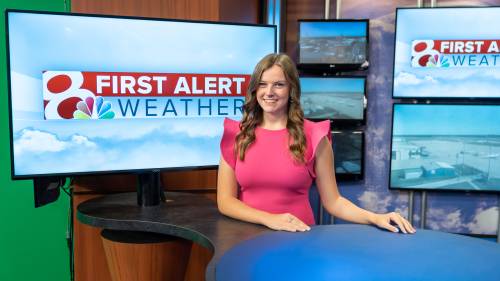 Kobielusz grew up in a family of musicians. Her mother earned a music degree and Kobielusz spent her childhood listening to her dad play in various bands. While music was obviously encouraged, Kobielusz didn’t pursue playing an instrument until she picked up the recorder in the fourth grade.

“My parents were not huge fans of the noise I was making while playing the recorder,” Kobielusz said. “They had me switch to the clarinet pretty quickly.”

While a strong marching band was an important option for Kobielusz when she was choosing a university, she ultimately made the decision to attend MU because of its stellar atmospheric science program. Kobielusz said she has been fascinated by meteorology since she was young.

“I’ve always really liked clouds,” Kobielusz said. “I eventually figured out that I could turn that interest into an actual career.”

Kobielusz said that the Good Friday tornado, which tore through St. Louis, Mo., in 2011, touched down just a mile from her house. Her family spent a lot of time helping the community with various needs, including preparing food for those who faced major home damage. She said that experience showcased the impact a storm could have on a large group of people.

“That storm showed me how the weather can turn at any moment,” Kobielusz said. “It also confirmed to me that I had an interest in studying what makes a storm go from mild to severe.”

For the past two years, Kobielusz has interned with KOMU-TV as a broadcast meteorologist. She began with a segment on Friday nights and currently shares weather updates at noon three times a week. She also shares her love for weather with local schools throughout mid-Missouri.

“I had no interest in doing broadcast when I originally started my degree,” Kobielusz said. “The thought of being in front of a camera was terrifying. I wanted to do the important, behind-the-scenes work. When the opportunity to intern with KOMU came up, I decided to just go for it. I definitely found a passion for broadcast meteorology, and I think it’s something I would like to pursue in the future.”

Kobielusz will graduate in May and said she is making sure to take in each moment before she moves from student to alumnus. She said having the chance to play during the Macy’s Thanksgiving Day Parade will be an amazing way to finish her collegiate career.

“It doesn’t feel real, honestly,” Kobielusz said. “I grew up watching the parade like so many others, and being able to say that I was actually a part of it is such a huge milestone.

“I’m also proud to represent MU on such a big stage. Mizzou has felt like home since the moment I got here, and it’s an honor to showcase what we can do during such a visible event.”