Boating, swimming, fishing and waterskiing are synonymous with Missouri summers, and, thanks to a dedicated effort between scientists at the Limnology Lab in Mizzou’s School of Natural Resources and volunteers across the state, the water quality in the lakes we enjoy and rely on has been monitored and improved for the last 30 years.

“What we have in Missouri is an impressive 30-year record of community-driven lake data that stands proudly alongside the best in the country,” said project manager Tony Thorpe.

The Lakes of Missouri Volunteer Program (LMVP) began in 1992 with just seven lakes. That year, volunteers collected 196 samples from 30 sites within those lakes, and each sample was analyzed at the University of Missouri. Thirty years later, in 2022, volunteers are sampling 115 sites within 65 lakes across the state. So far, volunteers have sent 720 samples to the lab at Mizzou, but that number is expected to rise before the year’s end.

The data collected are more than just numbers for the thousands of Missouri residents and visitors who enjoy our lakes year-round. These analyses are provided to state and federal agencies that manage waterways and are used to identify lakes that need remediation to improve water quality. Continued sampling is then used to monitor progress, helping to ensure the cleanest, healthiest water possible. Each site is monitored up to 8 times each year for several water quality indicators including water clarity and algal toxins.

Since the LMVP program’s inception, participants have collected and scientists have processed more than 18,000 water samples — all analyzed in the MU Limnology Lab at the University of Missouri.

Patrick Market, director of the School of Natural Resources, gave opening remarks at the anniversary event.

“LMVP was something of a trend setter in robust citizen science; it set a standard,” Market said. Efforts like the CoCoRaHS weather network followed out of Colorado in 1998, and the MO DIRT citizen soil science effort came along in 2015.” 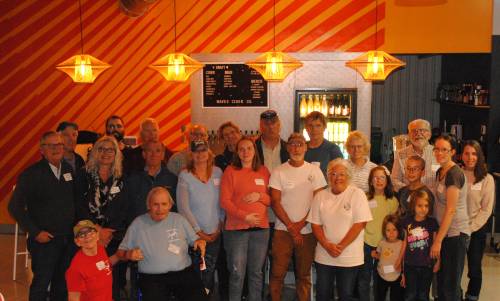 LMVP participants gather for a group photo at the program’s 30th anniversary celebration.

After dinner, attendants heard about the origins of LMVP from Jack Jones, Curators’ Professor Emeritus at MU’s School of Natural Resources and one of the LMVP’s founders. Robert Voss of the Missouri Department of Natural Resources spoke about the value of LMVP’s water quality data to the state of Missouri. Maryam Salehi, assistant professor of Civil and Environmental Engineering at MU, spoke about the pervasiveness of plastics in the environment.

Following the presentations, volunteers and professionals had the opportunity to mingle and chat, connecting those who collect the water samples with those who use the data.

The event was held at Waves Cider Company and catered by Pizza Tree.