Stationed on a ship returning from an assignment in the Middle East, Kyle Andrews was contemplating his next moves as his United States Marine Corps contract was coming to an end. Andrews knew that he wanted to pursue a four-year degree – and the University of Missouri had made an impression on him during a handful of unofficial visits.

“My first option was always Mizzou,” said Andrews, now a senior agricultural systems technology student at MU. “I really liked everything that the university stood for, and one of my long-term goals was to be a Tiger. I actually applied to Mizzou on the ship thinking I might as well give it a shot. A couple weeks later I found out that I was accepted.”

Andrews said his interest in Mizzou originally began as a high school senior in Waynesville, Mo. While MU was at the top of his list, Andrews ultimately made the decision to attend Ozarks Technical Community College after graduating from high school in 2012, which was closer to home and allowed him to join the Marines Delayed Entry Program. Andrews, along with his father and brother, attended Ozarks simultaneously, with each earning a certification in welding.

Toward the end of his time at Ozarks, Andrews also followed in his father’s footsteps and officially became a Marine. Although Andrews’ father was close to retirement from the Marine Corps, the two of them were active duty for seven days together.

“The day I earned my Eagle, Globe and Anchor (the official emblem and insignia of the United States Marine Corps) was one of the best days of my life,” Andrews said. “It took a lot of hard work and was a big accomplishment. For me, serving your country is one of the most honorable things a person can do. You put everything in your life on pause for the opportunity to serve others. Those individuals were always heroes in my eyes, and it was a huge moment for me to join their ranks.”

Andrews’ Military Occupational Specialty (MOS) was as a Chemical, Biological, Radiological and Nuclear (CBRN) Defense Specialist. In that role, Andrews was equipped to not only handle CBRN threats but also trained other Marines to be prepared for those dangers. Becoming a CBRN Defense Specialist was a natural fit for Andrews. His father served as the assistant director of the Marine Corps CBRN School in Fort Leonard Wood, Mo., before retirement.

“After finishing an assignment in Japan, my dad chose to finish his time with the Marine Corps in Fort Leonard Wood, helping to oversee the CBRN school there,” Andrews said. “He brought in an excellent staff. I truly was trained by some of the best CBRN specialists out there.”

Andrews was first stationed at the Marine Corps Air Station (MCAS) Miramar (California), home to the 3rd Marine Aircraft Wing, before transferring to Marine Corps Base Camp Pendleton (California) to help with CBRN trainings. His primary goal was to increase CBRN knowledge across the unit. Andrews eventually deployed with the 13th Marine Expeditionary Unit on the USS Rushmore. He spent a few weeks in Kuwait and the surrounding regions training multiple units and other local military on CBRN threats. 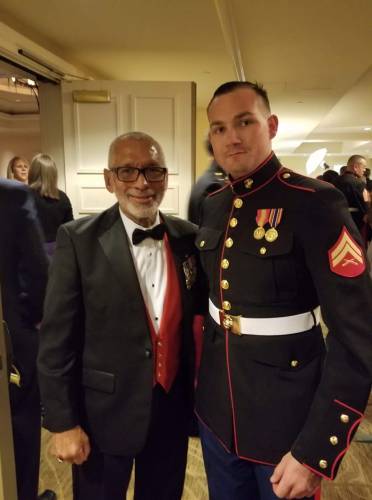 “I was in charge of CBRN tracking, training and operations across three ships that included 300-plus Marines and sailors,” Andrews said. “I learned a lot about logistics and how much each unit relies on solid logistics to operate. I really liked that work, going in and recognizing what the unit’s strengths were and what changes could be made.”

During his time as a Marine (2014-19), Andrews spent time in 13 countries doing similar work. Those interactions showed Andrews that he had an interest in solving complex problems and teaching others ways to be as efficient as possible.

“I realized that I had a passion for dissecting problems to find solutions that make things more efficient,” Andrews said. “I also like being in real-life situations where I can apply what I’ve learned – as well as share that knowledge with others.”

Andrews has multiple opportunities to solve problems through the agricultural systems technology degree program, including numerous chances to see real-life situations play out in the classroom.

“This degree interested me because there’s always something new to learn,” Andrews said. “In the agriculture field, problems can arise at any moment, such as a tractor getting stuck or a hazardous chemical leak. We’re finding solutions for problems that don’t even exist yet. The work we’re doing allows us to help others when those problems do arise.

“Choosing the agricultural systems technology degree was one of the best decisions I’ve made.”

Andrews has been incredibly involved during his time at Mizzou, joining the AST Club and the Torq’N Tigers Quarter-Scale Tractor Team. He was part of a Torq’N Tigers team that recently took second place honors during the American Society of Agricultural and Biological Engineers (ASABE) International Quarter-Scale Tractor Student Design Competition. Andrews spent three years as a student research assistant for the National Center for Soybean Biotechnology as well.

Andrews also serves as the vice president of the Mizzou Student Veterans Association. It’s an organization that he said helped him get acclimated as a nontraditional student – and one that has several connections to veterans groups throughout mid-Missouri.

“I knew MU had a great reputation when it came to supporting veterans, which was obviously a big draw for me,” Andrews said. “When I first came here, I knew I wanted to be an advocate for student veterans. Our role is to make sure they feel at home while they finish their degree. It’s a big change and many don’t understand what our veterans have been through. We do our best to help them transition back to civilian life.”

Andrews said he will pursue graduate school after earning his degree in May. His goal is to stay in the agriculture field and study a topic related to agricultural systems technology, agriculture education, soil science or agricultural engineering. Andrews did have some agriculture experience when he arrived at MU, as his family operates a Shetland sheep herd in Colorado, but added that his time at Mizzou strengthened his interest in the field.

“When my dad retired our goal was to raise bees,” Andrews said. “We had everything ready besides the hives. Our neighbor had some Shetland sheep, though, that he taught us about and he eventually gifted us two of them. We kind of accidently fell into agriculture honestly – but I’m really glad we did. It’s a field of study that I’ve grown very interested in.

“I’m excited for my next steps. My ultimate goal is to have a positive impact wherever I end up. I want to help others and have the work I do benefit communities of people, whether it be rural, urban or suburban.”