It was just five years ago when Darius Robinson suited up for his first organized football game as a junior at Canton High School in Michigan. The sport came naturally to Robinson, and it didn’t take long for Division I scholarship offers to start rolling in.

In his two seasons at Canton, Robinson became a top-20 prospect in the state of Michigan. Multiple universities lined up to add him to their roster, and while Robinson had a handful of in-state options, the University of Missouri won out.

“It was a crazy process for sure,” said Robinson, who is a senior hospitality management major at MU. “I had just started playing and I was already getting interest from major universities. I had several really great options, but Mizzou definitely stood out and was the best fit for me.”

Robinson actually enrolled at MU a semester early, getting a jump-start on his college education. He did return to Michigan twice, to attend prom and to collect his high school diploma. 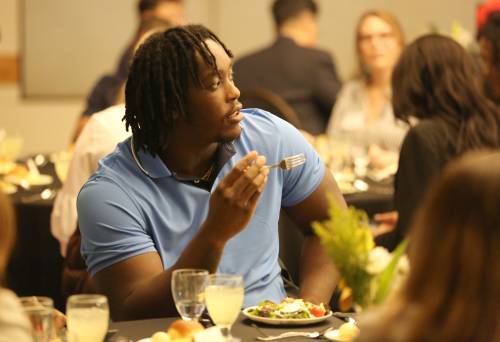 “I was only 17 years old when I started at Mizzou, so I had a lot to learn,” Robinson said. “I was the first person in my family to attend college, but I had a great support system at home and at MU who really helped me along. I was nervous when I first got to campus, but the older players on the football team took me under their wing. They checked on me and helped me navigate college life.”

Robinson now serves in a similar mentor role as one of the captains of the football team. He stresses to the younger players how vital it is to be a good teammate, on and off the field.

“It has been a fun experience,” Robinson said. “I remember being in their shoes. For me, one of the biggest things as teammates is being able to count on one another. I do whatever I can to show my teammates that I’m willing to help them through anything. At the end of the day, football is cool but you’re going to remember the relationships and brotherhood you’ve built more than anything.”

A part of the Tigers’ defensive line, Robinson played in five games as a true freshman. His playing time has increased each year as a Tiger.

“I thank God for the opportunities that I’ve been presented,” Robinson said. “I’ve worked really hard to get to this point and I’ve always tried to make the most out of each opportunity. It’s rewarding to see that hard work pay off.”

While Robinson’s dedication to football has been evident each season, he has also stayed committed in the classroom. Robinson said he chose the hospitality management degree program because of his interest in the hospitality industry, especially when related to tourism.

“When I first started at Mizzou, I was really interested in business, but I also wanted to be able to explore the hospitality industry,” Robinson said. “That work is really tied to people, and there’s a certain mindset that comes with that. When people travel, they remember their experiences. Through this degree program I’ve been able to learn ways to make sure those experiences are as positive as possible.”

Robinson added that he enjoys how his classes focus on the most up-to-date information related to the industry.

“The entire experience has been really fun, and I’ve been able to build great relationships with my professors and classmates,” Robinson said. “I like how we constantly discuss how much the industry is changing each day. It really helps us be prepared as we enter the workforce.”

Robinson is on schedule to receive his hospitality management degree in May. While he does have a year of college football eligibility left, he said he is taking his football career a day at a time and will see what the future holds.

“I’m really excited to graduate and get my degree,” Robinson said. “Being the first person in my family to go to college, it’s a big moment for sure. I’m setting the standard for my future family. I think my mom is going to be more excited about seeing me walk across the stage at graduation than watching me out on the football field.

“I’ve had a chance to reflect recently, too, and think about life after football. When my football career does come to an end, I want to be more than prepared for my next steps. The University of Missouri and the hospitality management degree program have set me up nicely to handle whatever comes next.”