The Discovery Fellows program at the University of Missouri, offered through the Honors College, gives first-year students the opportunity to join a research laboratory the minute they step onto campus.

For Brooke Weiler, the one-year scholarship has turned into a four-year research journey. Weiler, a senior majoring in both biochemistry and psychology, has found a passion for research while working in the lab of Charlotte Phillips, a professor of biochemistry and director of the Anne and Tom Smith MD-PhD Program in the MU School of Medicine. Weiler has worked with Phillips throughout her undergraduate career.

“As a Discovery Fellow, I immediately fell in love with research,” Weiler said. “The work that I do in the lab supplements the learning I do in the classroom; it really puts things in perspective. It’s exciting to dive in and learn more about specific topics, and working with Dr. Phillips has allowed me to explore a variety of interesting questions.” 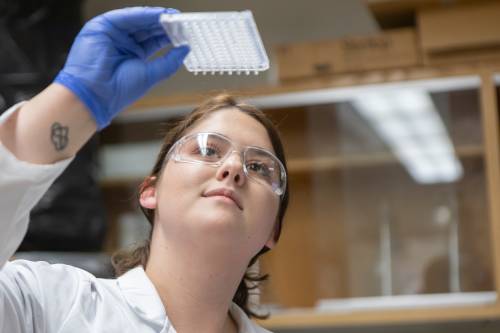 The research projects Weiler has participated in have focused primarily on brittle bone disease. She was part of a published study that looked at myostatin, a protein that limits muscle growth to ensure that muscles do not grow too large. Using mouse models, the lab injected myostatin inhibitors to see if bone growth would be stimulated if the muscles were allowed to grow exponentially.

During the past two years, Weiler has led two of her own projects. Last year, she studied bone cells, specifically how they grow and mature, in an attempt to identify the source of brittleness. This year, Weiler’s research has been focused on studying mitochondria in the heart and its relationship to brittle bone disease. She said that while bones are obviously most affected by the disease, recent literature suggests that the heart can also be negatively impacted.

“Being able to participate in this level of research, all as an undergraduate student, is really incredible,” Weiler said.

Weiler’s research experiences have led to exciting opportunities outside of the MU system, too. She completed an internship at the Children’s Hospital of Philadelphia (CHOP) this past summer, through the CHOP Research Institute Summer Scholars Program (CRISSP), where she spent 10 weeks in the division of neurology. Weiler will present about that research during a national conference in Anaheim, Calif., this month.

“I saw the translational side of research, the bench to bedside, and how it informs research through CRISSP,” Weiler said. “CHOP is a really unique place and it was interesting to be immersed in that atmosphere. My work also further affirmed this is the path I want to go down.”

Weiler, who grew up in Ste. Genevieve, Mo., said she was originally interested in pursuing a medical degree after completing her biochemistry degree. After jumping into those numerous research opportunities, she realized that she still wanted to pursue medicine – but would rather participate on the research side.

“As a first-generation student, there is oftentimes the expectation that you’re going to be a doctor, a lawyer or find a related occupation – especially if you show an aptitude in STEM,” Weiler said. “I love science, which did push me toward the medical field. Once I found out more about research, though, I realized I could make a big difference through that work, too.

Weiler will graduate in May and said she is focused on finding a graduate school opportunity to continue her education. Her research interests are centered on human disease, including autism and other intellectual disabilities in children.

“Medicine can’t advance without the science behind it,” Weiler said. “The research that is happening impacts lives every day. My interest in studying autism comes from past clinical experiences where I worked with children who had autism. I hope to help find effective treatment strategies that can help not only the individuals affected but their families as well.”

As Weiler prepares for her next steps as a student, she said she is incredibly proud of all that she has been able to accomplish, especially as a first-generation student.

“My advice to future first-generation students is to ask questions,” Weiler said. “When I first came to MU, I had a lot of pride and didn’t like asking for help. I wouldn’t be where I am today without asking questions. I would also encourage them to make connections and surround themselves with people who are in their corner. My mentors have been my saving grace, especially Dr. Phillips. She has been so encouraging and helped guide me through rough patches.

“I wanted to quit quite a few times. My guiding force, though, has been to make my parents proud. I’m proud of myself, but they’ve given me so much to help me be successful. I have worked so hard, and seeing how much I’ve grown is so rewarding.”