Hired in 2019, Verónica Negrón-Pérez has spent the past… Expand ▸

After finishing her undergraduate degree in animal science at the University of Puerto Rico-Mayaguez, Verónica Negrón-Pérez was excited to continue to her educational journey.

Negrón-Pérez set a very specific goal for herself – she would spend the next 10 years gaining important research and hands-on learning experiences through the pursuit of advanced degrees. After those 10 years were up, she wanted to return to Puerto Rico and give back to the island where she grew up.

The first stop on her journey was the University of Missouri.

“It was a bit of a frustrating time, though. I had applied to several universities, but I really wasn’t able to find a place that felt like the correct fit. I wasn’t sure what to do or really where to go.” 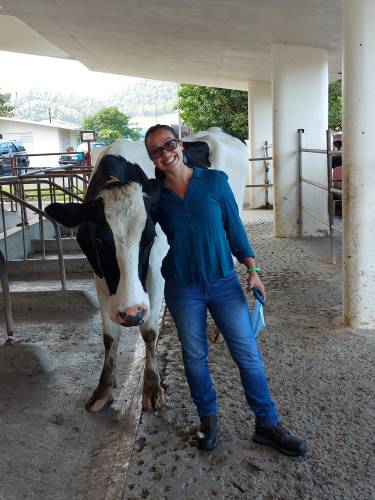 Two of Negrón-Pérez’s professors at the University of Puerto Rico-Mayaguez encouraged her to reach out to Rocío Rivera, a professor in the Division of Animal Sciences at MU. Rivera was an acquaintance of the two professors, and they thought she might have an opening for a master’s student.

Negrón-Pérez was able to meet with Rivera, who did, in fact, have an opening in her laboratory, and Negrón-Pérez soon had a very important decision to make.

“After meeting with Rocío, everything happened very quickly,” Negrón-Pérez said. “I had quite a bit of paperwork to complete and had to retake a couple tests. Before I knew it, though, I was packed up and moving to Columbia, even though I didn’t really know where that was.”

Negrón-Pérez spent two years at Mizzou, from 2011-13. Her primary research focus was related to genetics in mice, specifically working with mouse embryos. She compared two in vitro culture media to see if a couple specific genes behaved in a particular way.

While Negrón-Pérez admitted that she was ready to move to larger animals after working with mice for those two years, she did find an interest in working with embryos while at MU.

“Looking back on everything now, I’m so glad that I went to MU,” Negrón-Pérez said. “It was a great decision and really opened a lot of doors for me.”

Negrón-Pérez said she found a home away from home when she joined the Latinx Graduate and Professional Network (LGPN) while at Mizzou. Rivera serves as the faculty advisor for LGPN.

“I didn’t have a huge culture shock when I came to the United States, since I am a US citizen as a Puerto Rican and there is definitely an American influence here,” Negrón-Pérez said. “This network really provided me a sense of community, though. It gave me a group who understood what it’s like to be homesick, who missed speaking the language. It gets tiring at times to speak your second language nonstop. It was nice to have a group where I could share those life experiences with.”

Negrón-Pérez’s time in Missouri was just her second trip to the continental United States. She spent six weeks at Ohio State University (OSU) the summer before her senior year at the University of Puerto Rico-Mayaguez. That stay was through OSU’s Summer Research Opportunities Program and her research centered on bovine sperm and embryos. She said that experience solidified her interest in animal science.

“Like a lot of animal science students, I was interested in going to veterinary school,” Negrón-Pérez said. “I figured out that wasn’t the exact path for me, but I knew I wanted to work with animals in some capacity. I found a passion for research that has continued to carry through my professional career.”

“I knew that if I wanted to work at a university in Puerto Rico, I was going to need a PhD, as well as more field experience,” Negrón-Pérez said. “I was really able to get out into the field and get my boots dirty during my next two stops, especially at Virginia Tech.”

In the middle of her postdoctoral fellowship, Negrón-Pérez was offered a job that she said she couldn’t turn down. Hired in 2019, she has spent the past three-plus years as an assistant researcher and principal investigator at one of the University of Puerto Rico-Mayaguez’s agricultural experiment stations – this one located in Gurabo, on the eastern side of Puerto Rico. It was a perfect opportunity at the same university where she earned her undergraduate degree.

“My undergraduate professors are now my colleagues,” Negrón-Pérez said. “It has been such an amazing experience working for the same department where I was once a student.”

The experiment station where Negrón-Pérez works is called the Tropical Animal Reproduction Investigation Center (TARIC). She has been tasked with rebuilding the space, which was originally used as a dairy farm.

“Thankfully I didn’t have to start from scratch, but there has been a lot of work that has had to be done,” Negrón-Pérez said. “I’ve spent a lot of time talking with contractors and finding the correct lab equipment to purchase. I’m still hitting the goals that I’ve set for myself – but it’s definitely taken some time.”

Negrón-Pérez also has a handful of research projects that she is working on, including one related to a Holstein-Friesian herd at the experiment station. The herd that Negrón-Pérez is researching has shorter hair to handle Puerto Rico’s warmer climate, and she is focused on researching their reproductive cycle.

She also helps students who do research at the experiment station.

“I don’t have a teaching appointment, as I’m 100 percent research, but I do interact with students every so often,” Negrón-Pérez said. “Those interactions are honestly the most rewarding part of my job. For example, last month I had a student ask for a letter of recommendation. Their message to me was so wonderful, and they talked about how much they admired me.

“I had great mentors throughout my time as a student, so to be able to serve in a similar role is really important to me.”

Negrón-Pérez said she understands how important it is to have women leaders, especially in science fields.

“It’s vital for me to do whatever I can to help others,” Negrón-Pérez said. “I feel like I have had numerous opportunities to find success and I want to provide those same chances for students in Puerto Rico. I hope to inspire the next generation of female scientists.”