While Sebastian Moreno strengthened his passions for urban… Expand ▸

While Sebastian Moreno strengthened his passions for urban ecology and ornithology, the scientific study of birds, as a graduate student in natural resources at the University of Missouri, he also discovered a desire to connect with people on a deeper level.

Moreno’s graduate research in CAFNR centered on how large concentrations of vacant lots in northern neighborhoods of St. Louis impacted bird diversity and abundance. He was paired with another graduate student who spent time talking to the residents in the same area to get their perceptions on wildlife and plants in those vacant lots.

“I learned very quickly how social and environmental injustices impacted the green spaces in these areas,” Moreno said. “Those injustices were leading to vacant land, which was then creating habitats for the birds. It was an eye-opening experience that I don’t think I was ready for. I was honestly a bit jealous of my partner, too, who spent quality time with the individuals in the area, hearing about their struggles.

“My experience at Mizzou really set the stage for me to truly dive in and pursue my passions, both old and new. I knew I wanted to work with birds, and I knew urban ecology was something that I was really getting more interested in. I suddenly had a lust to work with people, too, especially those who looked like me and shared similar stories.” 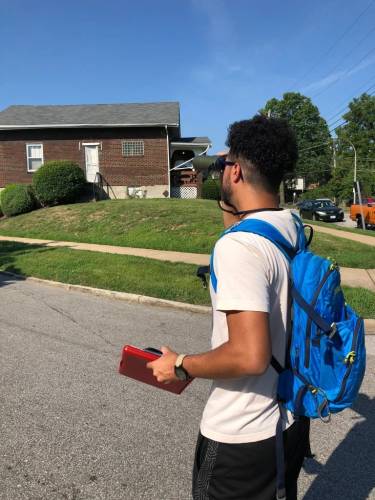 Moreno earned his master’s degree from MU in 2018 and began his PhD work at the University of Massachusetts in 2019. He is still conducting research through that program, where his focus is on the intersection of wildlife and people. Specifically, Moreno’s research looks at ways to improve the community science experience and remove barriers that may have prevented underrepresented individuals from participating in such programs.

“My goal is to make science more accessible,” Moreno said. “At the end of the day, if we’re out here as urban ecologists and we’re making conservation management decisions with skewed data because there are barriers for individuals to get involved, we’re starting on the wrong foot. Working closer together is a win-win, as we’re helping people connect with science, and, in turn, scientists are able to get better data.”

Urban ecology and ornithology were foreign terms to Moreno when he began his undergraduate degree at Wilkes University in Pennsylvania. He began his collegiate career pursuing a pharmacy degree – but soon realized that wasn’t the correct path for him. Moreno found himself spending ample amounts of time outdoors as he pondered his next steps. That time sparked an interest in nature and wildlife, which led him to biology. Moreno eventually earned a degree in biology from Wilkes University – but wasn’t sure what to do next.

“I had discovered a passion for ecology, a branch of biology, that I didn’t really know what to do with,” Moreno said. “After several discussions, I came to the conclusion that maybe I just needed more school to figure everything out.”

With nothing tying him down, Moreno reached out to a few schools about research for a master’s degree. After a conversation with Charlie Nilon, professor of urban wildlife management in the School of Natural Resources at MU, Moreno said he felt like he had found a perfect fit.

“I had never been west of Pittsburgh before making the decision to come to Mizzou,” Moreno said. “I felt like it was time to cross the Mississippi River and see what was out there.

“Working with Charlie was definitely a blessing. Having him in my corner early on was incredibly helpful. He wanted to help me get connected with others and that opened the gates for me to expand my network on my own. He helped make things more manageable and really guided me when I felt overwhelmed.”

Moreno was born and raised in New York City before moving with his family to Pennsylvania. While he had lived in large cities, coming to Mizzou was a much different experience than being at Wilkes University, which has less than 5,000 total students.

“I could basically stand in the middle of campus and throw a rock and hit the building where I took my science classes, turn around and throw another rock and hit the library,” Moreno said. “At MU, I needed a roadmap to get around campus. It was a much different experience, but one that I was really excited about and one that I ended up being really thankful for.” 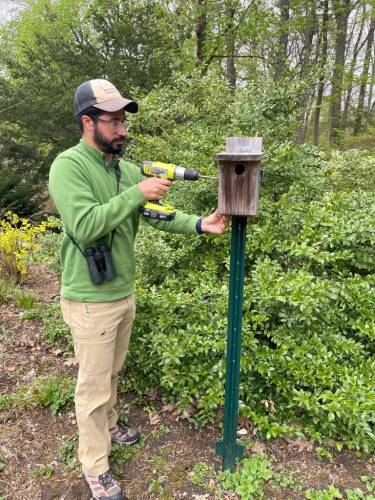 Along with his master’s work at Mizzou, Moreno joined the Latinx Graduate and Professional Network (LGPN), where he said he was able to make many lasting connections. Rocio Rivera, a professor in the Division of Animal Sciences, serves as the faculty advisor for LGPN.

“I love Missouri and I love Columbia, but the area is predominantly white, and I did really miss my culture while at MU,” Moreno said. “Through the LGPN, we were able to create a space to celebrate each other and our achievements. It made a world of difference to have a support system of people to lean on and who were sharing the same experiences that I was.”

Moreno said that he wanted to bring that type of community to the University of Massachusetts, too. He helped create a Latino Outdoors chapter for western Massachusetts. A national organization with a mission to inspire, connect and engage Latino communities with the outdoors, Latino Outdoors ensures that Latino history, heritage and leadership are valued and represented.

“I learned a lot from Rocio’s group, and I wanted to bring those core values here,” Moreno said. “We take part in multiple events together, including hiking, birding and kayaking. It’s been a beautiful thing.”

“Citizen science is a really cool concept,” Moreno said. “As ornithologists, we rely on data that the community provides because, at the end of the day, I’m a tourist in their neighborhood. They know their neighborhood better than anyone and clue me in on what the bird populations are doing in the area. They provide a natural bird history that I can’t get from my short visits or from a textbook. I made some really meaningful connections that go beyond scientist and participant. I’ve become part of their community.

“I’ve learned that there are still some flaws, though. Geospatially, a lot of eBird data comes from white, affluent neighborhoods. In St. Louis, for example, a lot of points come from are south of Forest Park. Does that mean that birds don’t exist in northern St. Louis? Of course birds are there. There are just several issues, including poverty and environmental injustices, that take precedent.”

Moreno has made an effort to provide information to fill the knowledge gap and is constantly thinking through different processes to make everyone more comfortable. He said it’s a major focus for him as he finishes his PhD.

“Working with Charlie at MU opened this new world for me,” Moreno said. “I feel like my current work has set the stage for version 3.0 of myself as a researcher. I really thought I wasn’t a people person – that was a big reason why I only wanted to work with birds. I’ve figured out, though, that I love working with people. I’m also really passionate about creating spaces that are both friendly for birds and for people.”