On Aug. 1, Christopher Daubert celebrates his fifth anniversary as vice chancellor and dean of the Mizzou College of Agriculture, Food and Natural Resources. His influence impacts faculty, staff, students and alumni in many ways. His five-year tenure has positioned the college for continued success in a changing society.

Here are five big accomplishments of Vice Chancellor and Dean Daubert during his first five years.

5. He established the CAFNR Strategic Plan, which keeps the college strong and on track

Following a process characterized by stakeholder input, Dean Daubert oversaw the development of a well-crafted strategic plan. He started the process just after his arrival in 2017. After months of interviews, analysis, testing and refining, the college launched the Drive to Distinction CAFNR Strategic Plan 2019-2025. A 2021 biennial report shows the progress made in the first two years.

This collaborative initiative, born out of the CAFNR Strategic Plan, enhances value-added processing for Missouri commodities and expands food chains on a regional and local level. Vast opportunities to grow Missouri food, beverage and forest product manufacturing could result in significant economic benefits.

3. He cultivates a robust CAFNR research enterprise and supports the bold goal of #2xAg2030

The CAFNR research enterprise has grown significantly during Dean Daubert’s tenure. He named Shibu Jose as associate dean for research and director of the Agricultural Experiment Station in 2019. In the first six months of FY22, grant expenditures are 42% higher during the same period in FY22 ($23.7M) compared to FY21 ($16.7M). The Agriculture and Environment Extension side shows dynamic growth as well. He named Rob Kallenbach as associate dean of CAFNR Extension/senior program director of Agriculture and Environment Extension also in 2019. The CAFNR strategic plan laid out doubling the value of agriculture in Missouri by 2030; efforts toward that goal are tagged with #2xAg2030 in social media.

2. He is passionate about students and ensuring student success

Often saying graduation is the “best day in the life of a university,” Dean Daubert calls students “our #1 stakeholders.” One aspect of student success can be measured in career outcomes. As defined by the strategic plan metric, the performance measure states, “ensure that 95% of degree recipients, undergraduate and graduate, achieve career success without 6 months of graduation.” The newest numbers from 2020-2021 are a remarkable 99%, proving that CAFNR graduates are career-ready and make outstanding candidates on the job market.

1. He has guided the college through covid and fiscal challenges

As a college with a vast, state-wide research, teaching and extension mission, CAFNR had to make major pivots during covid. But, with Dean Daubert’s guidance, the college was able to keep a keen focus on priorities. For example, CAFNR speedily transformed its livestock arena, Trowbridge, into a socially distanced classroom to make certain its largest classes could still meet in person. This was only one of many spaces updated for learning during covid – in all, 83 percent of CAFNR classes were still held in person in fall 2020.

The ensuing fiscal challenges were met by the Dean leading two restructures, one of the college’s academic divisions, and one of the Missouri Agricultural Experiment Station’s network of out-state research centers. Both have prepared CAFNR for a “post-covid world,” dialing in focus and efficiencies on the Drive to Distinction.

Bonus: He is a better trombone player than most other deans!

Dean Daubert grew up in a musical family and started marching with the high schoolers as a seventh grader when his dad, the director, needed a trombone on the field. He went on to join the Penn State Blue Band as an undergraduate, after playing the Macy’s Thanksgiving Day Parade, the Rose Parade and even in Ireland during high school. He’s brought that same love of music (and flair for fight songs!) to the CAFNR Unlimited fundraising event each February, where he’s surprised attendees with Mizzou melodies (whether played, sang or hummed on the kazoo!) alongside other musical faculty, staff, students, and sometimes even members of Marching Mizzou. 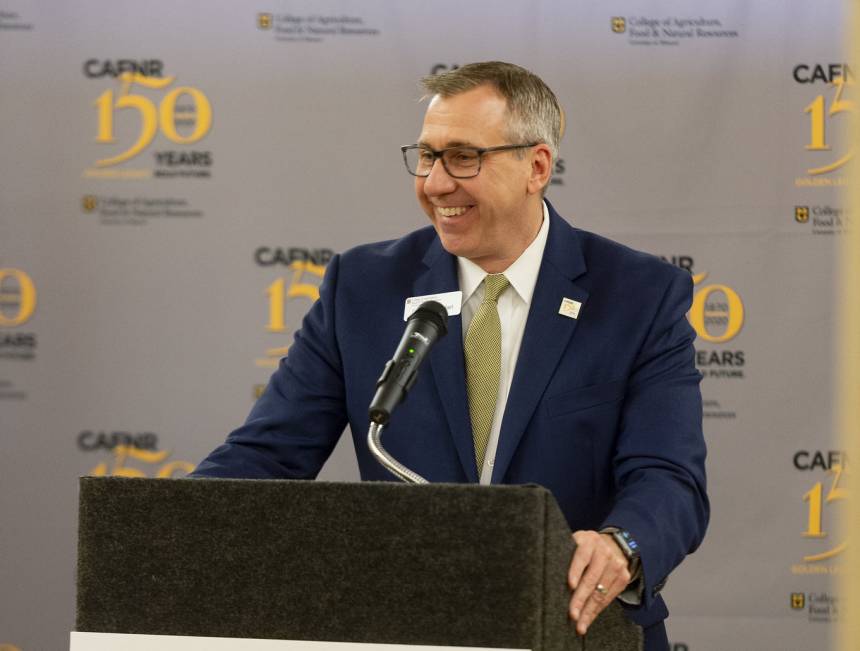 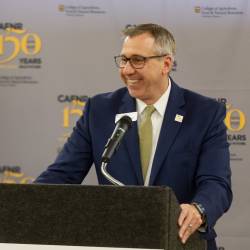 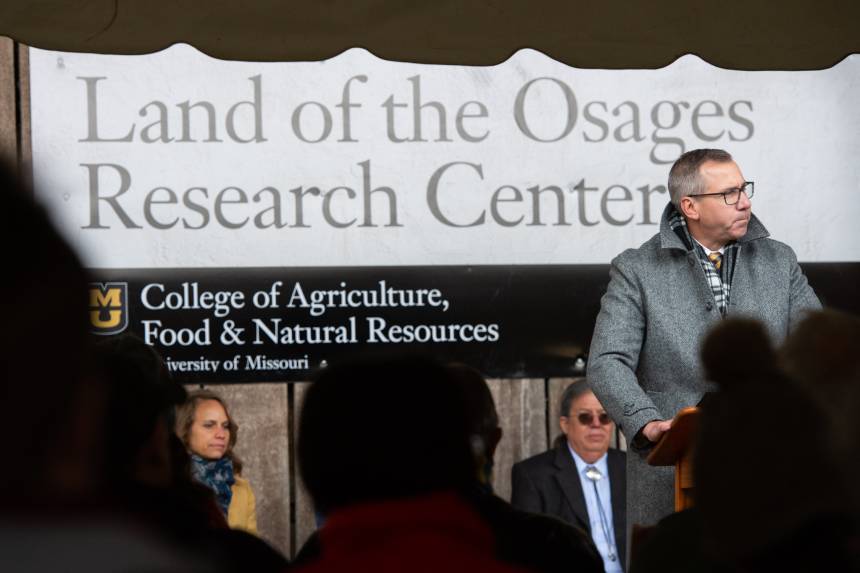 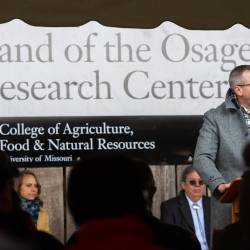 CAFNR's Vice Chancellor & Dean Christopher Daubert speaks at the dedication of the newest research center, Land of the Osages, in fall 2019. 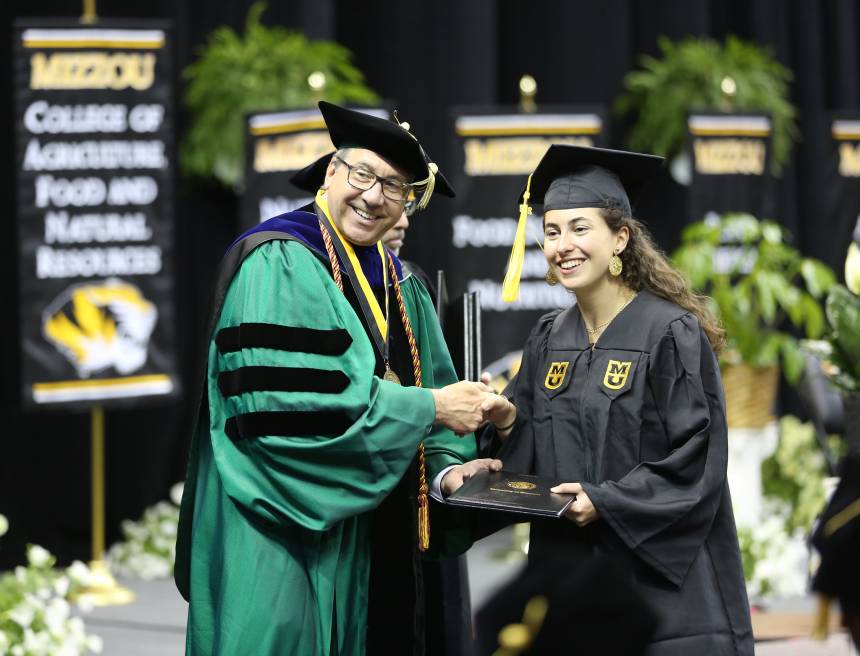 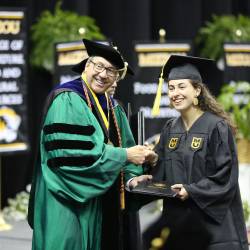 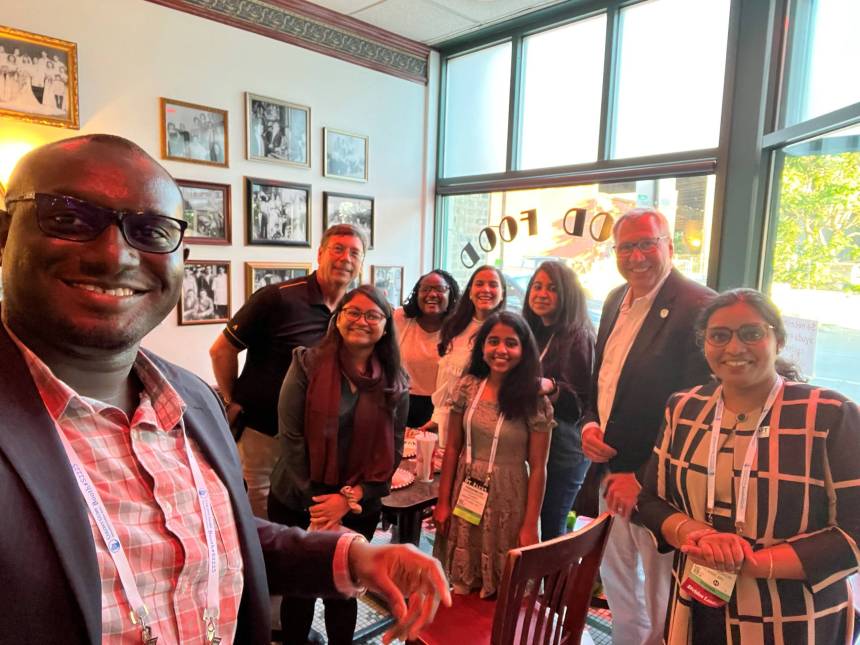 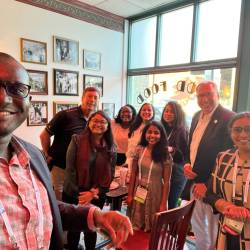 Vice Chancellor & Dean Daubert dines with CAFNR food science faculty and students at the Institute of Food Technologists conference in Chicago in summer 2022. 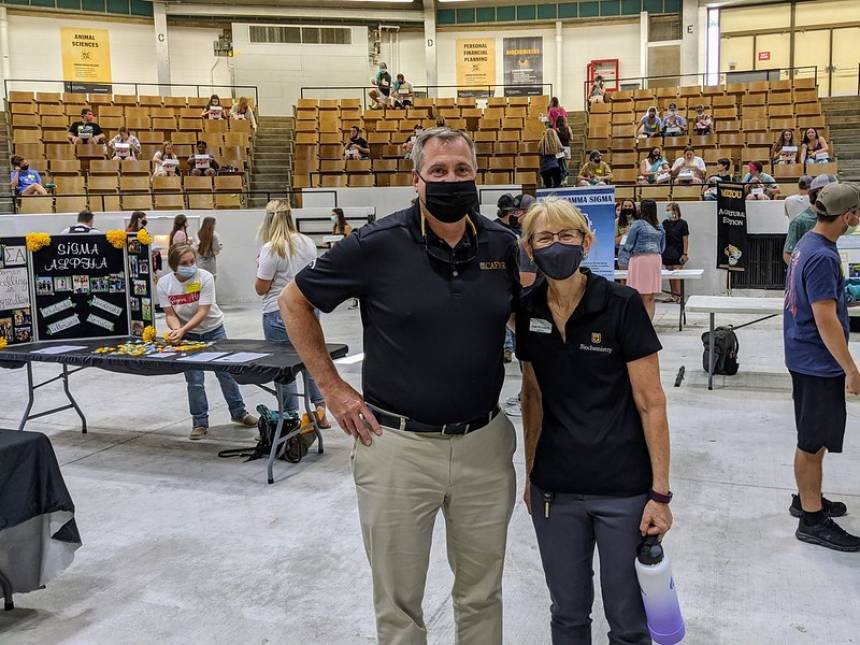 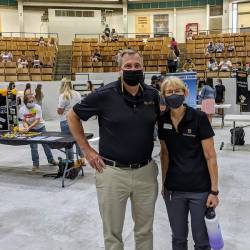 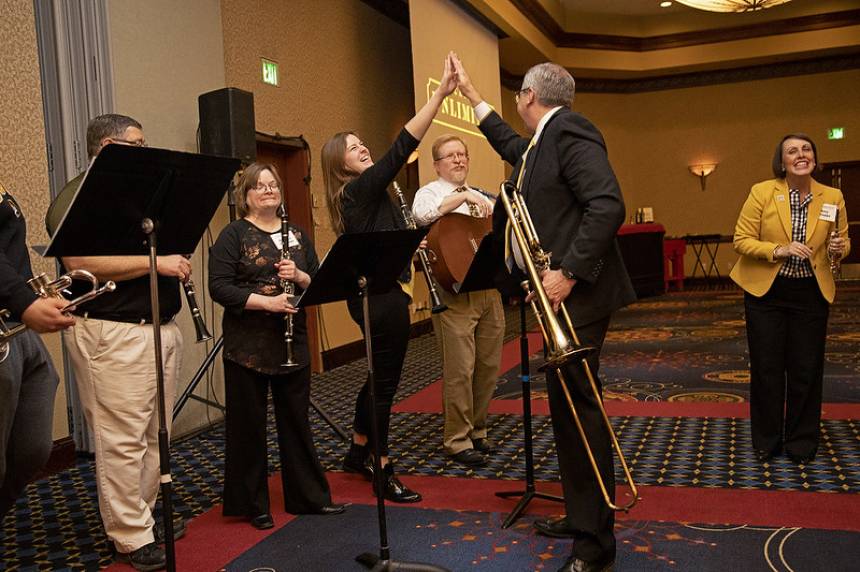 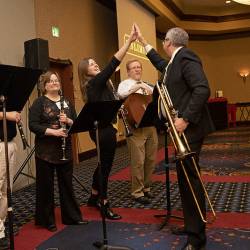