The 2022 Special Olympics Missouri State Summer Games brought more than 1,000 athletes, coaches and volunteers to the University of Missouri campus in late May for three days of competition and fun.

The opening night of the games, which included a parade of athletes, also coincided with Jalani Williams’ first day as an intern with Special Olympics Missouri. Williams received hands-on learning opportunities immediately during his first day – and helped lead the St. Louis metro area athletes during the parade of athletes. Williams attended Parkway North High School in St. Louis before continuing his education at MU, and said he was honored to share the spotlight with athletes from that area.

“Jalani has such a great demeanor with the athletes and handles himself so well,” said Brian Neuner, chief development and marketing officer for Special Olympics Missouri. “Working with our athletes requires some patience and that is one of Jalani’s greatest traits. During the opening ceremonies he did an amazing job of making time for each athlete and showed them so much respect.

“Jalani has been such a pleasure to be around throughout his internship.” 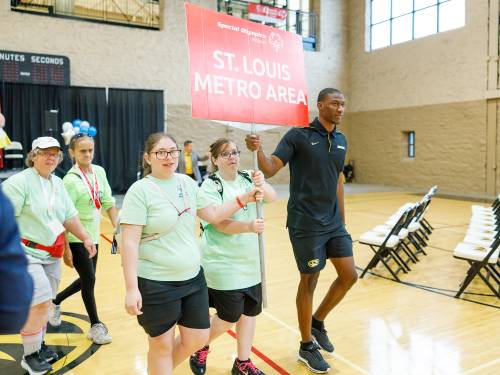 As a student athlete at Mizzou, Williams knows what it takes to compete at a high level. Williams is a defensive back with the MU football team and has been able to share his passion for sports with the athletes who participate in the various activities and events Special Olympics Missouri hosts.

“My favorite thing about Special Olympics Missouri is working with the athletes and putting a smile on their faces,” Williams said. “I think people sometimes doubt what these athletes are capable of. They work really hard and are really inspiring. They’re as much of an athlete as I am, and they want to show the world what they can do.”

Special Olympics Missouri uses sports as a way to promote acceptance and inclusion of people with intellectual disabilities. In 2019, the organization announced a new partnership with Mizzou, MU Health Care and the University of Missouri System. There are multiple opportunities for collaborations through the partnership – including a chance for students to gain valuable real-world experience through internships.

“We appreciate the opportunity that we have to give students valuable experiences,” Neuner said. “There are so many hands-on interactions that our previous interns have spoken very highly of. It’s a great partnership, and we’re always looking for students who are interested in working with us.”

Williams’ first experience with Special Olympics came while he was at Parkway North where he helped with a local event for three years, first as a volunteer and then in more of a management role.

“I really enjoyed helping with those events,” Williams said. “When I had the opportunity to participate in an internship with Special Olympics Missouri, I knew I wanted to be involved.”

Along with helping during the summer games, Williams’ internship has him reaching out to schools across Missouri about event opportunities throughout the year. He also has played a role in organizing and executing various events, as well as getting important experience related to the business side of the organization, which includes filling out and organizing a variety of forms.

“I dabble with a lot, which is really cool,” Williams said. “I have also continued to interact with the athletes. For example, there’s a guy who comes in a couple times a week to play basketball, and he always wants to play 1-on-1. It’s really fun to be able to compete with them.”

Williams, who grew up watching and playing football from a young age, received more than 20 Div. I college football offers before choosing to stay in the state he grew up in. He said that watching the 2013 and 2014 football teams, both of which won the Southeastern Conference (SEC) Eastern Division and a bowl game, made his decision to attend MU pretty easy. Plus, his parents are able to attend each of his home games.

“The Rock M really means something to me because I’m from here,” Williams said. “I want to see my state succeed, and I’m doing everything I can to help make that happen. I also love the atmosphere that the fans create. I’m proud to be a Tiger.”

Williams chose the parks, recreation and sport degree program, with an emphasis in sport management, because of his passion for sports.

“This degree is going to mean something when I leave here,” Williams said. “That played a big part in me coming here. The faculty within the degree want you to succeed. They’ve really helped me navigate my coursework and showed me what all I can do in the future.”

Williams still has three years of football eligibility remaining, and while he continues to prepare for the upcoming season, he said that he is also thinking through his future career options.

“I’m interested in quite a few different things,” Williams said. “I’m not sure exactly where I’ll end up, but I do know it will be something related to sports. I found that sports are my way to connect with other people.”