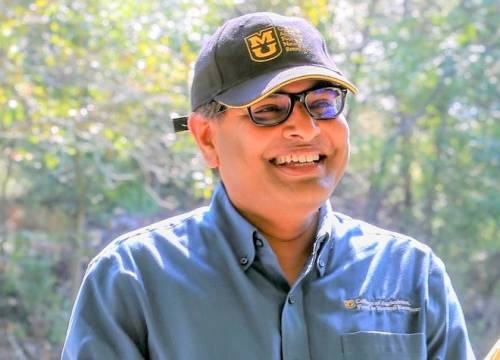 In honor of Asian American Pacific Islander Heritage Month, we asked Dr. Jose to share about his heritage as a native of India, as well as about his career and family.

What inspired you to work in your field?

I serve as the Associate Dean for Research in CAFNR and the Director of the Missouri Agricultural Experiment Station. Ever since I was an undergraduate student in India, I was drawn to research, which led me to follow a career in research, first exploring below-ground ecological interactions and now overseeing the research portfolio of the college. My grandma’s small farm where I grew up is where I learned the basic lessons of agriculture and natural resources. My grandma only had a fourth-grade schooling, but the traditional knowledge she possessed related to cropping systems was phenomenal!

How do you identify within the Asian American and Pacific Islander community?

How has your heritage shaped the person you are today?

I moved to the United States 30 years ago in my early 20s. A lot of my personal values come from my parents and grandparents. They instilled in me the love for learning and knowledge, virtue of hard work and the ethics of treating people with respect. My experience living in the U.S., a country with its own rich culture, has further influenced my growth as a person. Although our two sons, born in the U.S., have a hard time understanding some of the Indian culture and customs, my wife and I try to educate them about their roots as much as we can.

Does your family have any traditions that are especially important to you?

India is culturally so rich with a number of festivals and traditions. Christmas was the biggest celebration of the year at my home while growing up. I have the vivid memories of church services, Christmas carols and big feasts with family and friends from my childhood. We continue the same tradition here. It’s a time for family and friends to get together and we try to make it an immemorable experience, well, at least until next Christmas.

Who are the role models or mentors who have influenced you or helped guide you?

I have several great mentors who have influenced my life and career. I will mention one who influenced me for life, but with only one encounter that lasted for about five minutes. It was Mother Teresa of Calcutta. I met her in Washington, D.C., back in 1995. She never claimed she was a leader, but the whole world recognized her as one of the most influential leaders of her time and awarded her the Nobel Peace Prize. Her simple philosophy about helping others is what I have embraced as my leadership philosophy, “I can do things you cannot, you can do things I cannot; together we can do great things.”

What does Asian American Pacific Islander Heritage Month mean to you?

It’s a time for us to recognize and celebrate the strength in our diversity.