The University of Missouri men’s and women’s disc golf teams carried undefeated seasons into 2022 College Disc Golf National Championship competition, and both teams would end their seasons the same way – as national champions.

The women’s team led the tournament field from start to finish, winning by four strokes. The men’s team overcame a slow start with a strong finish to win by three strokes. The National Championships were held in early April in North Carolina.

The Mizzou Disc Golf Club formed in 2018, and this was the first national championship for both teams (this is the first year the club has had a women’s team compete). Two CAFNR students played important roles in the wins – Alexis Kerman and Jared Brabant. Kerman is a graduate student in natural resources, who also earned her undergraduate degree in parks, recreation and sport from MU. Brabant also received his bachelor’s degree from Mizzou, in natural resource science and management. He is currently a graduate student in plant, insect and microbial sciences.

“It was such an exciting weekend and an amazing experience,” Kerman said. “I’m just so proud of both teams. We both knew that we had a chance to win it all, and to complete that goal – it was incredible.”

“It was a perfect weekend,” Brabant added.

“I’ve played Ultimate since high school, and it was honestly the only disc sport I knew about,” Kerman said. “I played on Mizzou’s club team and was still playing in the Columbia community after graduation. When the season got canceled, I didn’t have a clue what I was going to do. I’m a competitive person, so I knew I needed something. My husband took up disc golf during the pandemic – it was one of the few sports that seemed to still be around during that time – so I decided to give it a try. I really didn’t like it at first, but I knew if I wanted to keep up with him, I needed to improve. I eventually got hooked.”

Originally from Dallas, Texas, Kerman was enrolled at The Citadel (The Military College of South Carolina) right out of high school. While she loved the challenges and the goal-oriented nature of the program, she realized she needed something a bit different. Kerman had applied to Mizzou before eventually settling on The Citadel, and said she chose MU when she transferred because the university was still willing to work with her even after she had turned them down. She graduated with her parks, recreation and sport degree in 2018.

“I was so thankful that MU was willing to have me back, as it was one of the universities that I had enjoyed when I was touring schools,” Kerman said.

Kerman chose the parks, recreation and sport degree program because of her love of sports. Her capstone internship was with Jefferson City Parks, Recreation and Forestry, a department she eventually took a full-time position with after graduation. She programmed outdoor recreation activities, team-building exercises for businesses, camping events and began implementing disc golf into her programs as well.

After a brief stint there, Kerman returned to MU for graduate school in 2021. 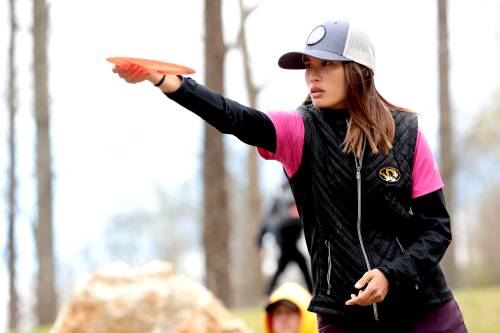 “I’ve always loved academics – I really thrive in that environment,” Kerman said. “I had always thought about completing a master’s degree, and it felt like the perfect time to go for it.”

Kerman is working with Jennifer Wentz, an assistant teaching professor of parks, recreation and sport, and Sonja Wilhelm Stanis, a professor in the School of Natural Resources, on her graduate school project. She is pursuing a project related to disc golf.

“It’s really great that I have the opportunity to take on a project related to my passion,” Kerman said. “I’ve been looking at the research related to disc golf, and there’s not much out there in that field. As the sport grows, it’s important that we conduct research that supports the growth.

“I get to mesh my academics with my passions, which is amazing.”

Kerman has partnered with Columbia Parks and Recreation to understand the demographics of individuals who play at the four courses in the city, as well as their thoughts on course design and other features. She is hoping to get more women to play the sport as well.

“One of the biggest goals of the Mizzou Disc Golf Club is to get more females throwing a disc,” Kerman said. “As the sport has grown, there have been equality issues that have come with that, and it’s really important for everyone involved to provide a safe and welcoming environment for female players. We’re working to showcase that all are welcome to play.”

To go along with the national championship that the women’s team secured, Kerman also earned All-American status with a fourth place finish in the individual competition.

“I’m so thankful for the support that our team has, especially in the Columbia community,” Kerman said. “The national championship was such an awesome experience, and I’m so glad our entire club got to be a part of it.”

Brabant helped found the Mizzou Disc Golf Club back in 2018, his first year at the University of Missouri. Brabant, who is from Illinois, transferred to Mizzou after two years at Illinois Central College. He has been playing disc golf since the end of his high school career.

“When I transferred to MU, the only thing I knew was that were some good disc golf courses in Columbia,” Brabant said. “I quickly found out that the campus didn’t have a club, and I wasn’t really involved in anything at the time, so I thought I could maybe start one. I was able to find a few others who were interested and the team then came together.”

Brabant also helped design a disc golf course in Columbia, working with a few others to create a course at A.L. Gustin Golf Course on the Mizzou campus. While the pandemic did put the disc golf course on pause for a little bit, a grant from the Educational Disc Golf Experience (EDGE) helped make the course a reality.

“Along with the club, I wanted something to be here after I left,” Brabant said. “This was a dream come true for sure. It was such a great partnership between our club and the course. It took a lot of research on our end, to showcase that this type of course could really work in conjunction with the golf course.” 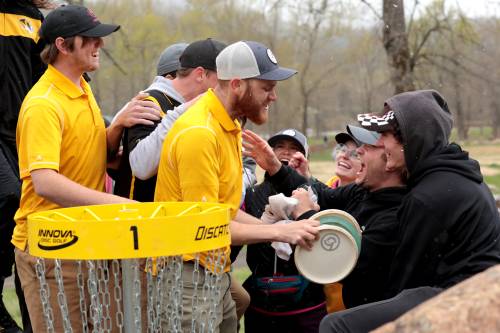 Brabant said that to win a national championship just a few years after forming the club was an incredible feeling. He hit the final putt to win the title.

“I generally don’t show a ton of emotion, but it was hard to keep it bottled up,” Brabant said. “The last few holes were incredible. We struggled a bit early on, but were never completely out of it. We found a good rhythm on the back nine and were able to come out on top.

“I’m so proud that we were able to all celebrate together, too. I love the game and I hope this can help us build some momentum and grow the sport even more.”

Brabant chose natural resource science and management, with an emphasis in fisheries and wildlife, because of his interest in working with fish. He said that he enjoyed the program, but when he made the decision to pursue graduate school, he wanted to take a different route. Brabant enjoyed some of his undergraduate entomology courses and said that area seemed like one he would like to dive deeper into.

“I collected a lot of bugs on the disc golf courses for a few of my classes – and I’m honestly surprised I was able to recruit anyone to the club,” Brabant said. “I had this giant net and a jar with me, sprinting around trying to capture insects. It’s amazing people want to interact with me – but it obviously all worked out. Plus, I found out that I had a really big interest in insects.”

Brabant’s graduate research in plant, insect and microbial sciences focuses on bumblebees and how they use their flower resources. He is taking flowers from north, central and south Missouri and growing them in Columbia. The flowers are the same species, and Brabant is testing how well each one does over time. He is also testing to see how the bumblebees handle each of the species.

“It’s been a great experience overall, and it’s been really interesting,” Brabant said. “I am a glorified gardener at times, as I deal with a lot of flowers, but with this project it all goes hand-in-hand. I wouldn’t say I have a green thumb, but with native wild flowers, they’re pretty resilient thankfully.”

Brabant is working with Debbie Finke, professor in the Division of Plant Science and Technology.

“Dr. Finke has been incredible to work with,” Brabant said. “Her lab has offered me a look at a side of science that I had never seen before. When I began the process of looking into graduate programs, I thought it would be great to be in her lab, and I know how fortunate I am to be in this position.”