A graduate student in the School of Natural Resources, Evan… Expand ▸

He grew up in a family of avid white-tailed deer hunters, and now Evan Aljundi has spent a good portion of his collegiate career studying the most popular game in North America. A graduate student in the School of Natural Resources, Aljundi’s research is focused on Chronic Wasting Disease (CWD), a fatal, neurological illness that affects cervids, which are members of the deer family.

Even before Aljundi began his graduate work, he said a good portion of his projects as an undergraduate student centered on white-tailed deer. Aljundi earned his bachelor’s degree in natural resource science and management, with an emphasis in fisheries and wildlife, from Mizzou in 2020.

“I grew up in a rural area, so all I was ever doing was spending time outside, and as I got older I became a fairly serious hunter and conservationist,” Aljundi said. “There’s always been an interest in white-tailed deer in my family. It was pretty natural, then, for me to study white-tailed deer quite a bit as an undergrad student because I had an interest in them. When I had the opportunity to really dive into Chronic Wasting Disease as a graduate student, I couldn’t pass it up.”

Aljundi grew up near Kirksville, Mo., and attended Truman State University for a year before transferring to MU. While he was originally going to study business, Aljundi became interested in finding a degree that would allow him to pursue his passions for nature and wildlife.

“I thought about animal sciences for a bit, but I didn’t have as big of an interest in working with domesticated or the more traditional farm animals,” Aljundi said. “My advisor told me about natural resource science and management and I knew that’s exactly what I needed to be doing.”

Aljundi works in the lab of Samniqueka Halsey, an assistant professor in the School of Natural Resources. He said she was one of three professors who made a big impact on him as an undergraduate student and helped him develop a new passion – research. 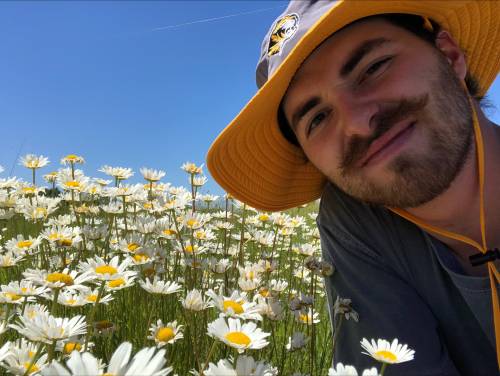 “Along with Dr. Halsey, Mitch Weegman (adjunct assistant professor) and Michael Byrne (assistant professor) really furthered my interest in research,” Aljundi said. “I was more interested in wildlife management when I first came to Mizzou, but each of these three professors really opened my eyes to the numerous possibilities within research.”

Aljundi has worked closely with the Missouri Department of Conservation on the project, using a vast dataset they have collected over the past decade. Aljundi said he has nearly 110,000 samples he has studied. He has created multiple models to identify patterns of CWD prevalence in Missouri’s white-tailed deer population.

“There have been approximately 300 total positive cases of Chronic Wasting Disease in Missouri since 2013,” Aljundi said. “I know that doesn’t sound like a crazy number compared to the number of samples we have. However, there were only 47 total cases from 2013 to 2017. Since then, we’ve been averaging at least 50 cases every year. It’s something we have to continue to monitor.”

Aljundi said the main management techniques used in Missouri to reduce CWD prevalence is implementing targeted culling to control transmission and dispersal in known positive locations, as well as public hunting seasons to monitor areas where it has yet to be found.

“Targeted culling has been the primary method used to help manage Chronic Wasting Disease across the Midwest,” Aljundi said.

Aljundi has been looking for transmission patterns, too, to see if the spread can be attributed to a certain age range or sex of white-tailed deer. Previous research has shown that males have a much higher rate of infection and mortality, which Aljundi also found in the datasets he has been using.

“Males have a much larger range, so it makes sense that they would have the greater opportunity to be exposed,” Aljundi said. “During breeding season, males are obviously on the hunt, and can travel a fairly long distance in that timeframe, making dispersal from one county to another very possible. Younger deer are also trying to find their home range, an area where they settle down, and show vast differences between ranges and movement patterns. As they get older, that range really starts to shrink, but we’re never sure where they may end up.”

There are numerous reasons as to why controlling CWD is vital, Aljundi said. There is a major economic component, as well as food-chain concerns.

“I’ll use where I grew up, Kirksville, as an example,” Aljundi said. “The opening day of rifle season was essentially a holiday. My dad, for example, he’ll sleep in on Christmas day, but on the opening day of deer season, if I’m not out of bed two hours before sunrise, he’s wondering what’s wrong with me. Residential and non-residential hunters bring business to the entire town, whether it be the purchasing of permits, clothing, hotels or even private land leases, everything is full.

“To go along with the economic importance, white-tailed deer are prey to species like red wolves, coyotes, bobcats and even bears in Missouri. If you start to lose the deer population, the predator population also suffers; there’s a domino effect there for sure.”

Aljundi said he will finish up his graduate degree this summer, and, after a mental break in the form of a road trip, will begin his PhD work this fall. Aljundi will continue to work with Halsey and is still thinking through what his research will focus on.

“I’m not exactly sure what I want to look at,” Aljundi said. “I could definitely continue to focus on white-tailed deer, but I also don’t want to become a one-species researcher. It might be time to move onto something else.”