When Ernie Verslues joined MFA Incorporated in 1987, he never envisioned one day serving as president and CEO of the cooperative. He said multiple opportunities within the company, as well as supervisors who put their trust in him, made his current role a reality.

Verslues has served as president and CEO of MFA Incorporated since 2015.

“It’s been humbling for sure,” Verslues said. “I’ve had numerous opportunities within this great company and several mentors who gave me the ability to shine and progress through my career. I didn’t come in with the idea that I would one day be in this role. But it’s definitely been rewarding to be able to serve in this capacity.”

Verslues recently shared what he’s learned as a leader of a major company through CAFNR’s Executive-in-Residence program. Verslues was on the University of Missouri campus April 12-13, where he met with students through class lectures, roundtable discussions, one-on-one meetings and other informal interactions. 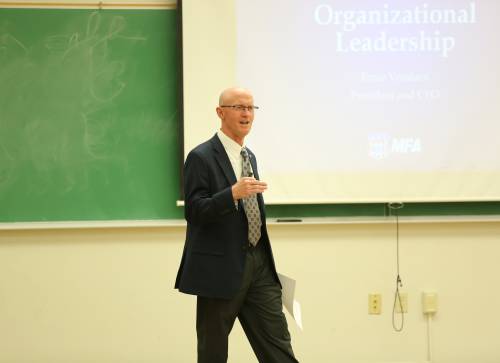 The Executive-in-Residence program, which was inaugurated in 1997, was envisioned and endowed by the Robert O. Reich family.

“As an organization, MFA Incorporated promotes education in multiple ways,” Verslues said. “We have foundations that provide scholarships to high school seniors, as well as educational opportunities to rural communities. Education has always been big to us, so the opportunity to have conversations with students and help develop future leaders, particularly in the agriculture sector, is very important.”

Verslues was a guest speaker in a handful of CAFNR courses during his visit. He also met with various CAFNR staff and students throughout his time on campus.

“I really appreciate the opportunity to participate in this prestigious program,” Verslues said. “It’s been rewarding and amazing to see some of the talent among the students. I told many of the groups that I talked with that students now are so much more advanced than I was at the same age. It’s great to see. We hear a bit of concern related to the workforce of the future, but it’s an intelligent group that’s going to do great things.”

Verslues grew up on a farm just outside of Jefferson City. He got his bachelor’s degree in accountancy from Central Missouri State University in Warrensburg. A first-generation college student, Verslues said he chose to study accounting because of his strong math skillset and at the encouragement of an acquaintance.

“My family farmed and my father was involved in construction,” Verslues said. “However, when I began my college career, both industries weren’t in great shape. I felt like I had an opportunity to do something a little different.

“I spent about a year in college trying to find my fit. As a first-generation student, I had to figure out quite a bit on my own. It was slow at times, but I’ve always been driven and when I set my mind to something, I can get it done.”

After graduation, Verslues spent time as an auditor in Kansas City before joining MFA Incorporated as manager of tax and local accounting services.

“The Tax Reform Act of 1986 had major impacts on companies,” Verslues said. “I was hired to help implement the changes to the tax structure for MFA Incorporated.”

Verslues said a couple of key roles really set him up well for his future as president and CEO. He was a controller in MFA’s Agri Services Division and spent a bit of time as a regional manager in Region 2.

“Those two positions were key for me and gave me the tools to succeed in my current role,” Verslues said. “I was able to work closely with MFA Incorporated retail operations and more importantly, the customer base.”

“I get to coach and develop an incredible team of highly talented people,” Verslues said. “Every organization has to have a vision, and I do have a vision for MFA Incorporated, but I didn’t shape that myself. I rely heavily on my executive team. As a leader, you have to be willing to develop future leaders. Your team will perform better if everyone is involved in the conversation. I don’t have all of the answers – the key is surrounding yourself with talented individuals who bring a diversity of thought. When you have a company as complex as MFA Incorporated, you have to have multiple viewpoints at the table.”

Verslues is a council member for the National Council of Farmer Cooperatives and chairman for the MFA Foundation and the MFA Charitable Foundation. He currently serves on the Executive Committee for the CAFNR Foundation Board, board member for the Missouri 4-H Foundation and has been part of the Missouri 100 since 2017. In 2018, Verslues was named an Honorary Member of CAFNR’s Alumni Association, and he has served on the Graduate Institute of Cooperative Leadership Board of Directors since 2016.