Chantelle Wimms and Kendra Esparza-Harris were named the… Expand ▸

The George Washington Carver Fellowship for Graduate Studies helps support under-represented scholars in MS and PhD degree programs in the College of Agriculture, Food and Natural Resources (CAFNR) at the University of Missouri (MU).

The assistantship honors George Washington Carver, a native Missourian, who gained international recognition in the early 20th century for his teaching and research in agriculture.

From a young age, Chantelle Wimms has had a love for animals. Studying fisheries and wildlife at the University of Missouri (MU) was the next step for her.

After receiving her undergraduate degree in biology from Truman State University, Wimms decided graduate school was the next step. A big reason Wimms decided to come to MU for her master’s degree was because of Samniqueka Halsey, assistant professor in the School of Natural Resources. 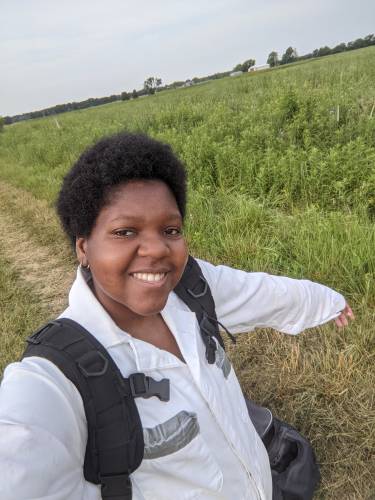 “Before I met Dr. Halsey, I was leaning towards going to vet school. I previously did research with her and talked to her a lot about graduate school and about what she does. After talking with Dr. Halsey, I realized that I wanted to conduct my own research.

“I realized that I wanted to be in control of my own lab. She has given me the space to ask my own questions, to be curious and to ask her questions. Everything I have learned so far is because of her.”

Wimms’ research is focused on the survivalship of small mammals in restored and remnant prairies. This is a continuation of research that she had worked with Halsey on previously.

“Last summer I worked on species richness and abundance for small mammals in restorative and remnant prairies. I was here at MU for two months and used data that Halsey had previously to expand on my research,” she said.

Wimms was accepted into a program called Missouri Louis Stokes Alliance for Minority Participation (MoLSAMP), which allows participants to live on campus at MU and conduct research for nine weeks. Wimms’ summer consisted of conducting field research with Halsey. She went to Prairie Fork and Tucker Prairie (MU’s prairie) to collect data. Conducting research was something new for her.

“At Truman there weren’t as many opportunities as possible to conduct research. To physically go out in the field to collect data was a super cool experience.

“I got to work with other students in Halsey’s lab which was a great experience. They were all super nice to me and understanding. Coming from the suburbs of Chicago, then going out into a prairie was a totally different experience,” she said.

MU was not on Wimms’ radar when it came to graduate schools. After two summers working with Halsey and her lab, that changed.

“When I started with Dr. Halsey, it lit a fire under me. We understood each other so well and her also being a black woman in ecology — she understood some of the issues I was having and the fear of going to graduate school.”

The other students in Halsey’s lab also pushed her too.

“Everyone’s research was so fascinating to me; I knew I wanted to be here with this group of people. Being around these creative people I knew would help me in my own research,” she said.

Wimms’ graduate work is an extension of what she had researched before. Wimms looked at the number of specific species in both remnant prairie and restored prairies and how many mammals there are in each space. After two summers of data, she found there wasn’t a big difference. This got her thinking about what is allowing them to survive in both type of prairies.

“When I started looking outside of just survivorship, like looking at what type of food is available, spaces they can live in, etc.,” Wimms said. “I also am looking at weather changes, vegetation, periods of time between mowing and burning to see if that has anything to do with how these small mammals survive.” 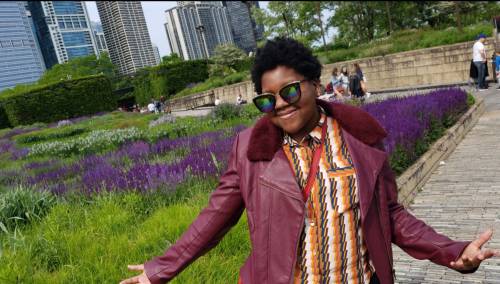 In the future, Wimms has thought about doing wildlife outreach to help educate the next generation of students about science and wildlife.

“Black people have been so excluded from STEM and even myself being in STEM I always ask myself: Do I really fit in or belong?

“We have to start familiarizing young kids with science and opportunities in science. I remember as a kid we would have a nutritionist come in and talk to us about healthy foods and diets. But what about bringing in people, especially minority people, into schools to talk about wildlife, environmental science, etc.,” she said.

Wimms said two experiences as a child really shaped her interests in wildlife and biology. One being a local reptile sanctuary that would send employees into her elementary school to talk about what they do and about reptiles in general.

“I feel like these programs are fading fast, and they’re so important — especially in underrepresented communities. I would also love to see parents discover these topics and explore science on their own with their kids,” Wimms said.

Another experience that she vividly remembers is the miniature zoo in a local park near her house.

“The zoo had its own bison, elk, deer, etc., right in the middle of a suburban area. There was a trail that you could walk that would go by a river. This was as much experience with nature I got growing up in the suburbs and I really fell in love.

“Receiving the George Washington Carver Fellowship means a lot. He did so much for Black people in the field of agriculture and science. Being given this opportunity makes me excited to continue my research and hopefully make an impact,” she said.

Kendra Esparza-Harris, originally from Richmond, Virginia, found her passion for agroforestry and agriculture-wildlife interactions by pursuing different opportunities. Esparza-Harris received a bachelor’s in large animal science and certificate in global studies from North Carolina Agriculture and Technical State University. She then continued her education obtaining a master’s in applied reproductive physiology at the University of Illinois Urbana-Champaign.

Applying what she learned in her education led her to pursue an internship at the St. Louis Zoo in their reproduction department.

“After my internship, I came to the understanding that I wanted a real-world experience,” said Esparza-Harris. “I loved reproduction however, I wanted to understand communities’ human-wildlife interactions which conflict reintroduction of wildlife species.”

After her internship, Esparza-Harris, specifically searched for opportunities that would provide experience in understanding the relationship agricultural practices have with wildlife conservation. This led her to enter the Peace Corps, where she went to Senegal and served as an agroforestry Extension specialist. 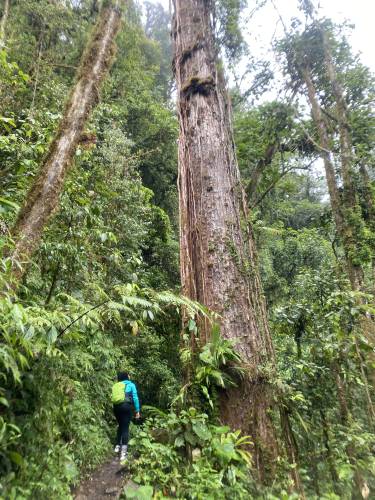 “This opportunity gave me real-world experience, and insight into agriculture and wildlife conflicts through intensive language learning, project development, and hands-on groundwork with agroforestry extension such as helping communities’ to plant and incorporate different trees in their agricultural practices.”

During her time in Senegal, she worked on disseminating techniques to combat agroforestry desertification, the process in which fertile land becomes desert, as well as sustainable burning practices.

“Among farmers who plants peanuts, especially communities that live near national parks; there is a constant conflict in trying to combat agriculture and wildlife interactions, with climate change and desertification,” she said.

After her experience in Senegal, Esparza-Harris was awarded an internship at the Cincinnati Zoo. She said this was a great steppingstone to get back into research.

Esparza-Harris is advised by Ashley Conway, assistant research professor in the School of Natural Resources, and Sarah Lovell, director for the Center of Agroforestry and H.E. Garrett Endowed Chair associate professor.

Since starting her studies at MU, Esparza-Harris is working to develop and execute three research projects for her dissertation. The first project is a woodland silvopasture survey, which will be disseminated within Missouri. The survey will look at practices, perceptions and barrier to adoption of woodland silvopasture among livestock producers and forested landowners in Missouri.

“The survey aims to capture present knowledge and perspectives of silvopasture practices among Missouri livestock producers and forested landowners’ and potential adoption for implementation,” she said.

For the second part of the project, Esparza-Harris will head back to Senegal for six months. She will be collaborating with an agency to help facilitate her research, which is looking at traditional ecological knowledge among pastoralists and agriculturalists in Senegal. Esparza-Harris explains that this will be a language-driven experience.

She has previously learned and gained proficiency in Mandinka, an ethnic language spoken in Senegal, but she is also learning Wolof, the most widely spoken language, and auditing a French course here at MU.

“Once I arrive in Senegal, I will be fully immersing myself in the Wolof language,” Esparza-Harris said. “I will be the main communicator with the people participating in my study. Upon permission I will record the semi-structure interviews and focus group discussions, translate them into English, and then transcribe for analysis. I will be responsible for translations of Wolof and Mandinka, with an assistant proficient in Pulaar.”

The last part of her study will be at Thompson Research Center, part of the Northern Missouri Research, Extension and Education Centers (REEC). At Thompson, Esparza-Harris will implement silvopasture practices into the farm’s rotational grazing operation.

“The idea is that all three of these projects cohesively blend together using silvopasture as an adaptive strategy,” she said.

Along with her studies, Esparza-Harris is active in several organizations including the Interdisciplinary Natural Resources Group (INRG), Minorities in Agriculture, Natural Resources and Related Science (MANRRS), Wildlife and Fisheries Graduation Student Organization (WAFGSO), Agroforestry and Forestry Graduate Student Association (AFFGSA) and is a 2021-2022 Deaton Scholar.

“I wanted to enter an agroforestry-specific program and the Center for Agroforestry at MU was it. After looking through the program I identified professors that were doing research in agriculture-wildlife conflict, specifically silvopasture. I felt like it was the right fit.”

“The other departments have been very welcoming and helpful,” she said. “Silvopasture is across many disciplines, and I have been able to take classes and talk to faculty and get a lot of assistance in my interdisciplinary research.

“I am very grateful to receive this fellowship and support from my advisors, recommenders and CAFNR in general. I feel like CAFNR has done an amazing job of supplying resources for anyone in a diverse field. Having those opportunities available to help me enhance my research ability is amazing.”

After Esparza-Harris is finished with her PhD, her goal is to pursue an interdisciplinary career in agricultural and land-use systems.