The National Institute of Food and Agriculture (NIFA) recently awarded 54 predoctoral fellowship grants to develop new scientists and professionals to enter research, education and/or Extension fields within the food and agricultural sciences. The aim of these fellowships is to cultivate future leaders who can solve emerging agricultural challenges of the 21st century. These grants are part of NIFA’s Agriculture and Food Research Initiative. Two University of Missouri (MU) College of Agriculture, Food and Natural Resources (CAFNR) students were recipients for 2022.

Going back to his roots

Kyle Paddock, originally from a small town in central Illinois, has been involved in agriculture since a young age. This is where his interest in plant science began.

“My parents are the reason I got interested in plant science,” Paddock said. “My dad was a farmer and my mom always kept beautiful flower gardens.” 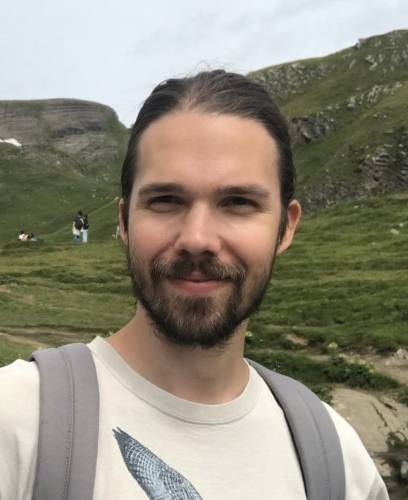 Paddock is currently a PhD candidate in plant, insect, and microbial sciences in CAFNR. He also received his bachelor’s degree from MU in biochemistry. After his undergraduate degree, he realized how much he missed the agriculture industry and knew he wanted to go back to that field.

“I’ve always been surrounded by agriculture,” he said. “When I decided to study something else and leave that field, I realized how important it is. I wanted to get back involved.”

After graduating with his undergraduate degree, Paddock stayed at MU to do research with Gary Stacey, Curators Distinguished Professor in Plant Science and Technology (PST) and Biochemistry, and Bing Stacey, assistant research professor in PST. Paddock worked in the Stacey Lab in the Bond Life Sciences Center doing soybean genomics research.

After gaining research experience, Paddock became interested in other types of research and joined a start-up company called AgBiTech. AgBiTech is a growing and transformative crop protection company focusing on science-based biological insect protection. The company, which was based in Columbia, eventually grew and moved to Texas.

“After the company moved to Texas, it became less research based and turned to more production based,” Paddock said. “I still had the research bug, which led me back to MU for my PhD.”

Coming back to MU to continue his education was an easy choice. Paddock stated that the entomology program has a lot of resources and has given him the opportunity to apply for several competitive grants to travel to different conferences. He also had a very positive undergraduate experience, which ultimately led him back to MU.

“After I decided I wanted to continue my education, I reached out to both Bruce Hibbard and Debbie Finke to get started.

“The professors here are top notch in the field of entomology. I have really enjoyed learning and interacting with them. It’s been a really enriching experience,” he said.

Paddock’s research focus is in studying the microbiome of insects, specifically the bacteria found in them.

“I have an interest in microbiome research. The pest we work with, the western corn rootworm (WCR), is damaging. It destroys a lot of corn throughout the corn belt,” he said.

Paddock stated this is a huge problem because WCR is resistant to many applications, including transgenic corn expressing Bt, Bacillus thuringiensis, toxins. There was evidence in other insects that the microbiome could have an effect.

“We then looked at the western corn rootworm that are resistant to Bt and noticed a difference in their microbiome compared to a susceptible insect.

“With a susceptible insect when it feeds on a Bt-plant root their microbiome is disrupted. Whereas with a resistant insect, their microbiome doesn’t change. This is what sent me off on the path of studying the microbiome in the western corn rootworm,” he said.

Using funding through this grant, Paddock is continuing his PhD research to examine whether cover crops, which can alter the soil microbiome, would affect the western corn rootworm.

They have started extracting soil from corn fields planted with cover crops in the winter to see what happens to the corn rootworm.

“This project is bringing together my work that I’ve done on Bt, the microbiome, and my interest in agro-ecosystem functioning,” he said. “The goal is to find that by planting cover crops, it won’t 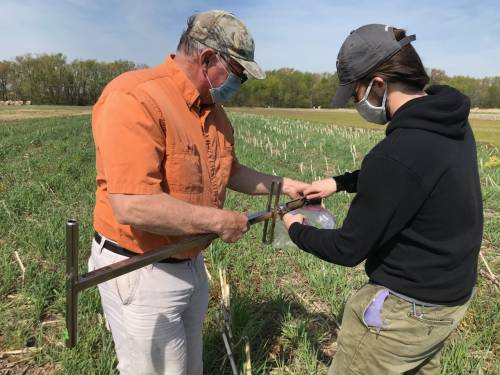 Data for this project is being collected at the Long-Term Agroecosystem Research Network Site (LTAR) in Centralia, Mo. The site has replicated field plots managed under different agricultural management tactics.

“This information is really important to growers. If they are going to plant cover crops on their fields, they need to know what the impacts are going to be.”

In the future, Paddock would like to continue performing research as a professor. He also has an interest in potentially working for the United States Department of Agriculture (USDA); he has worked with USDA in the past.

“I really love research and would like to continue down that path, but I’m not sure how that would look. I enjoy teaching and have had the opportunity to be a teaching assistant here at MU. I feel like designing and delivering my own course at a research institution would be a great experience.”

Katy Stoecklein’s interest in beef cattle and reproduction started at a young age. Originally from Macon, Mo., she grew up on a small seedstock and commercial beef cattle operation. Her passion and interest for beef cattle led her to CAFNR to study animal science.

Through courses at MU, Stoecklein grew an interest in reproduction and artificially inseminating cattle. Throughout her undergrad experience, she sought out opportunities to learn more about reproduction and reproductive technologies.

“When I was in my undergrad, I took a class on reproductive physiology and another course on reproductive management,” Stoecklein said. “The more I learned about embryo transfer and in vitro fertilization (IVF) the more  interest I had in these  these technologies.” 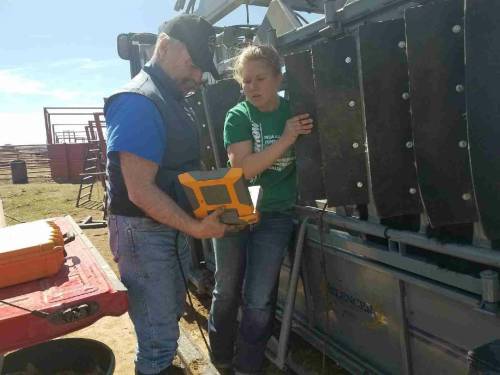 After receiving her undergraduate degree, Stoecklein did an internship at Gardiner Angus in Ashland, Kansas. She spent the spring of 2018 learning about cattle production and reproductive technologies.

“Learning how these technologies (embryo transfer, IVF, etc.) were being used in the real life solidified that I wanted to do a graduate program in reproductive technologies.

“I started looking at different graduate degrees and ultimately ended back up here at MU. Dr. Randy Prather had a project for me that was a perfect fit for my interests,” she said.

In the fall of 2020, Stoecklein advanced to PhD candidacy. Her research focuses on in vitro fertilization and how it can be used in production agriculture.

Through her internship, she got to work with veterinarians that use these technologies every day.

“Getting to work with veterinarians using these technologies firsthand was such a great experience,” she said. “I then took an interest in how we can make these technologies easier for the producer to implement, which led me to my current research.”

“There are a few different steps when it comes to in vitro embryo production. First, you use an ultrasound guided needle to collect eggs from the cow. After collection, you put the eggs in a dish and mature them. Then, you take a straw of frozen semen and fertilize the eggs. The fertilized eggs are put in a culture medium for about 7-8 days, at which point they are either cryopreserved or transferred into a recipient cow.

“We realized the different media we were putting the eggs/embryos in throughout the process aren’t as optimal as when this process occurs in the cow. We are  trying to figure out how to improve that in vitro environment and ultimately improve the pregnancy success following embryo transfer,” she said.

Stoecklein’s decision to come back to study at MU was easy. She said she had made a lot of connections through her undergraduate degree that could help her get to the next step in her career.

“I had such a positive experience during my undergraduate degree,” she said. “I came to understand the high-caliber research that was being done in the animal sciences department. I felt like this was the best fit for me.”

Stoecklein’s research is unique, in that it is taking both a basic and applied approach. In the basic approach, she wants to understand what is happening in these embryos that are making them superior once they add the extra growth factors to the medium. The applied approach is looking at how this modification can directly benefit  cattle production.

“In agriculture I feel like that’s really necessary,” she said. “I don’t want to ask a producer to put embryos into a modified culture medium and not be able to tell them why and what the benefit is.”

“When I received this fellowship, I was really honored,” Stoecklein said. “I have always been interested in animal agriculture, and when I took this project on, I got to understand that there is translation into human medicine as well. Seeing the full application is so important with research like this.” 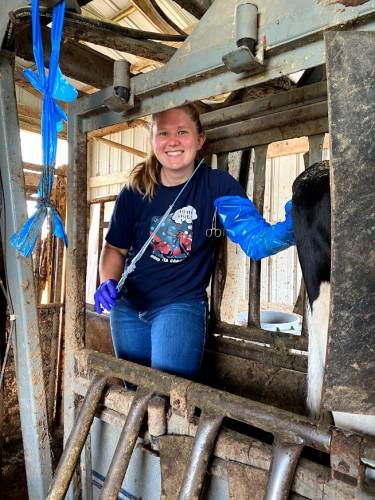 Funding through this grant not only is helping her continue her research, but it also is focused on training. Stoecklein said that in the proposal she explained the skills that she already has but wants to continue building on them. The grant will also allow her to go to several conferences, including one internationally.

In the future, Stoecklein goes back and forth between a career doing applied research and being a traditional cattle embryologist.

“I would like to be able to use these skills that I’ve learned in my future career,” she said.  “I also have thought about how I want to be the one that bridges that gap between the data and the producer. I want to help operations find what reproductive technologies can help them meet their goals and help them implement those.

“I want to use my skills to make the data usable for people in the industry. I always joke that every time I go home, my dad asks me what I am doing. to answer I have to turn the jargon into layman’s terms. He is challenging me, but I enjoy doing it and it makes me think about what impact my research is having.”