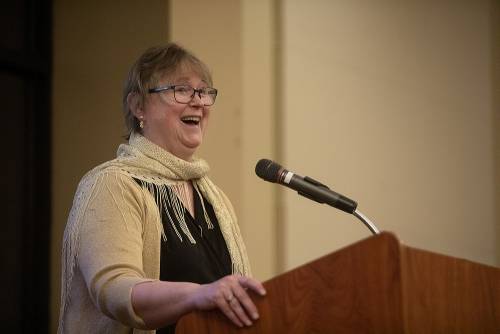 Delores Knipp (MS Atmospheric Science ‘84, BS Agriculture ‘76) has focused her research career on the weather that occurs high above the earth’s surface, where the line between space and atmosphere is blurred. She works with students to investigate methods for improving scientific use of space environment measurements from the Department of Defense, NASA and international space missions.

In 2021, she received the College of Agriculture, Food & Natural Resources’ Column Award for Distinguished Alumni, the only award specifically for alumni presented by the college. The awardee class includes one graduate from each of CAFNR’s six divisions, reflecting the six historic columns at the University of Missouri.

In honor of Women’s History Month, we asked Delores a few questions about her distinguished career, women who have inspired her along the way, and how she is supporting the next generation of women in her field.

I am a Research Professor in the Smead Aerospace Engineering Sciences Department at the University of Colorado, Boulder. My group focuses on data analysis and data science for space weather and space environment. This may seem quite a stretch from my start as an Atmospheric Science major in what was then Mizzou’s College of Agriculture. Over the course of my career, I’ve had the privilege of exploring how terrestrial weather and space weather are similar and different. I really enjoy researching and communicating about atmospheric science at the edge of space. I used to think of the edge of the atmosphere as being located where jets flew. Now I regularly research disturbances at the altitude of the International Space Station (ISS) and even higher where communications satellites orbit. There is something inspiring about viewing the atmosphere from ISS altitudes and seeing the blue sky fade to dark space. That view reminds me of how thin and fragile our atmospheric envelope really is.

There are many women. I will share two: One was my mother, Carmelita. I grew up on a small-to-mid-sized farm in central Missouri. Dad did the heavy field work. Mom did the housework and wrangled me and my seven siblings. But she did something else that intrigued me. During afternoon nap time for siblings, she would pull out a giant black ledger to keep the farm books. She called it ‘figuring’. From an early age I knew that she expected me to be good at ‘figuring’. I practiced math at an early age. If I struggled with a homework problem, she would tell me to put my ‘thinking cap on.’ Those early expectations set me on a path to success. All of my siblings share the memory of the putting our ‘thinking caps on,”….no easy answers….think it through.

My high school math teacher, Mrs. Burns, was also a great inspiration. Just a couple years before she retired, she took a summer course to learn how to teach pre-calculus. I’m not sure I would have made it through the calculus courses at Mizzou without that start. Her determination to constantly improve herself to benefit students was a strong inspiration for me. I will never forget it.

How do you strive to set an example for the next generation of women leaders?

As a student in the Ag School I had a strong sense of belonging, but it was different in my early career. In the first 10 years of my Air Force career, I was typically the only woman in my unit. I felt I always had to work harder than anyone else to prove myself. Although the term ‘imposter syndrome’ was not in use at the time, I know I felt it. I’ve hit my stride in the last 15 years. Now, I make an overt effort to let young women know that they do belong in any position in which they are willing to ‘do the work/make the effort’. I’m a bit of an introvert so I have to make an effort to be in front of people, but I know it’s important for me to be a public person in my job and as a mentor. When chatting one-on-one with mentees I do let them know that success has required intentional effort.

What advice do you have for women entering your industry?

I wish I could say that entering the science technology engineering math/medical (STEM) fields will be easy, but I know it continues to require intentional, concerted effort. That said, if you have a passion for your work, it is worth making that effort, not only for yourself, but for others who follow you.