A 2018 graduate of the nutrition and exercise physiology… Expand ▸

Born and raised in Columbia, Mo., Mubinah Khaleel knew that when the time came for her to choose a place to continue her education, the University of Missouri was going to be her top choice. And when it came to choosing a degree, Khaleel wanted to follow in the footsteps of her mother and sister, who both studied nutritional sciences, through the nutrition and exercise physiology (NEP) degree program, at MU.

“That major really summed me up as a person – it incorporated all of my interests,” Khaleel said. “I knew I wanted to do something in medicine. For a lot of students who apply to medical school, most study biology – I decided to do something different. I was already interested in nutrition, and I thought I would stand out a bit by doing something that not everyone does.”

Khaleel’s mother is a diet technician and her sister is a doctor of pediatrics; both are employed by MU Health Care.

Along with a family influence, Khaleel graduated from Rock Bridge High School and many of her friends were attending Mizzou. She was happy to join them as a Tiger.

“I loved knowing my surroundings,” Khaleel said. “I also really appreciated having that familiarity with at least a few of my friends from high school. MU was a great fit all around.”

Khaleel was incredibly involved during her time at Mizzou. An avid sports fan, she spent a lot of time at the rec center. Khaleel was also involved in a handful of student clubs, including the Muslim Student Organization, where she served in a leadership role. 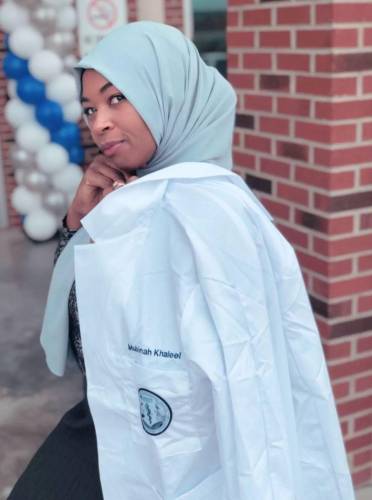 “Getting involved was very important to me,” Khaleel said. “Through those clubs, especially the Muslim Student Organization, I had a group of people who knew what I was going through. I could connect with them, talk with them and it really helped me with the college experience.”

Khaleel was also very active within her degree program, completing research projects and shadowing physicians to get a feel for a potential future career. Her research projects within NEP were primarily related to bone structure. She was part of the MU Nutritional Center for Health (MUNCH) as well, working with children on healthy eating options.

“I really loved the faculty and that I was able to connect with each of my professors,” Khaleel said. “They served as great mentors and had so much knowledge. The group also did an amazing job of tying what we were learning to current topics, making it more real.”

Khaleel’s undergraduate research work showcases CAFNR’s “RISE” Initiative, which includes Research, International, Service learning and Experiential learning. Her work falls under the research section, which opens the door for undergraduate students to gain research experience throughout their time in CAFNR.

Khaleel graduated with her nutrition and exercise physiology degree in 2018. She is currently a third-year medical student at Lincoln Memorial University – DeBusk College of Osteopathic Medicine, in Harrogate, Tenn. Khaleel has recently been in Memphis completing medical rotations.

“It’s been an awesome experience so far,” Khaleel said. “I’ve built great friendships, and the professors really care about us and encourage us. I’ve been able to get even more hands-on experiences, which has really helped me see what I would like to do in the future.”

Khaleel said she is interested in a couple areas of medicine, including obstetrics and orthopedics. Khaleel said her studies at an osteopathic medical school have given her a different perspective to medicine.

“Osteopathic medicine looks at the body as a whole, instead of just going straight to medicine,” Khaleel said. “I wasn’t really familiar with that work until recently, but it really incorporates my nutritional values.

“At the moment, I’m just working to decide which field is of most interest to me and working to build my career in medicine.”

Whatever direction she goes, Khaleel said she is hoping to make a difference for underrepresented people. She said she has had many conversations with her sister about helping that population, including individuals in Nigeria, where their family is from.

“I’m trying to tailor my practice to getting underrepresented populations the care they need,” Khaleel said. “As we’ve seen with the pandemic, those populations are suffering from a lack of access to healthcare. For me, I want to go into those communities and show them that healthcare isn’t scary. I’m trying to provide them with the healthcare that they deserve.”

The CAFNR Career Services office recognizes career development as a lifelong process and is committed to helping students think about their future and work to make that future a reality. CAFNR has been incredibly successful in that regard as 99 percent of CAFNR graduates report a successful career outcome, such as employment, continuing education or military service, within six months of graduation. Also, 85 percent of CAFNR students are employed in a field directly related to their degree program after graduation.