In May, Maya Johnson will graduate with a food science and nutrition degree from the University of Missouri College of Agriculture, Food and Natural Resources (CAFNR). It will actually be Johnson’s second Mizzou graduation ceremony.

Johnson is a graduate of the Mizzou Academy High School program. She spent her senior year of high school in the program, earning her diploma during a ceremony at Memorial Union.

“This program gave me a lot of freedom and allowed me to set my own pace as I completed my high school degree,” said Johnson, who is also minoring in hospitality management. “I had attended private school previously, and was homeschooled my final year while I was part of the Mizzou Academy. I’m really happy to have found the program and to have been able to participate in it.”

While Johnson, who is from St. Louis, Mo., didn’t plan on attending Mizzou to further her education, she realized that its close proximity to her home – plus the opportunity to expand on her passion for science – were too good to pass up.

Johnson was originally interested in engineering, but switched to food science and nutrition after digging into the program a bit more. 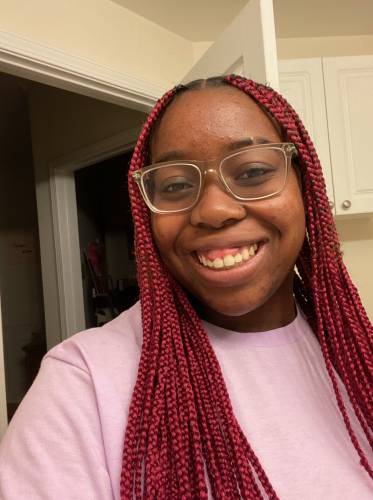 “My first thought was that I enjoyed food, but I didn’t want to be a chef or in a kitchen all day,” Johnson said. “I viewed it as more of a hobby – so I wasn’t sure which degree program would fit my interests. I knew I liked food, I liked science and I liked experiments. Once I found the food science and nutrition degree program I realized I would be able to mix engineering and food together. It ended up being the perfect fit.

“Food science and nutrition is such an important degree. When you go to the grocery store – the food you see on the shelves – a food scientist played a role in making sure that food is safe and fresh. Food is important for all of us, and it’s rewarding to be part of this program.”

The food science and nutrition degree program opened a door for Johnson to gain valuable research experience. She has been able to participate in a handful of projects, including in the laboratory of Kiruba Krishnaswamy, an assistant professor of food science.

“The first time I ever talked to Dr. Krishnaswamy was while I was working at Infusion,” Johnson said. “I had heard her speak at one of my classes, and while I was making her a drink, I asked about her lab. She told me to come on by.

“COVID messed up a lot of what I wanted to do, but it has been nice to work in her lab when I can.”

Johnson said her original research project would have focused on using granola bars in different recipes. While she didn’t get to dive deep into that work, she has previously worked with black walnuts and is currently conducting a research project related to consumer interests.

“Right now, I’m working to put together an online survey for students focused on their preferences, such as if they eat on campus, cook their own food or use Tiger Pantry,” Johnson said. “Working at the student center, I see a lot of the same people come in who eat the exact same thing each time. I’m curious to see what drives those decisions.”

Johnson’s undergraduate research work showcases CAFNR’s “RISE” Initiative, which includes Research, International, Service learning and Experiential learning. Her work falls under the research section, which opens the door for undergraduate students to gain research experience throughout their time in CAFNR.

To go along with research, Johnson has also participated in the Food Science Association and Mizzou Club Youn Wha Ryu Tae Kwon Do. She also helped establish Black Christian Fellowship, a space where Black students can gather to discuss numerous topics. Johnson served as the president of the organization up until last semester.

“It’s such a great place to talk about topics that you may not be comfortable talking about with other peers,” Johnson said. “There’s a level of understanding there; it’s like you’re talking to family in so many ways.”

Johnson said her plan after graduation is to go to graduate school. She said there are two main paths that she has an interest in – research and development, and quality assurance. She has been able to get experiences in both through two internships, one with ICL Food Specialties and another with the Aurora Organic Dairy.

Johnson has also spent time as a food and justice fellow with A Red Circle, a nonprofit organization that serves north St. Louis County. In that role, she assisted in monthly Healthy Community Markets, where the organization gave away produce and herbs, and educated the community on how they can use the products that were given to them.