Marco Walden, a junior majoring in plant sciences, was the… Expand ▸

A member of the Missouri National Guard, Marco Walden was called into disaster and humanitarian relief efforts during the initial COVID-19 pandemic outbreak in mid-2020. Walden served the state in multiple ways as a combat medic, from helping with testing to providing vaccinations for individuals in smaller communities and towns.

Walden, a junior majoring in plant sciences, took a gap year to help with the efforts. When he returned to the University of Missouri last year the first thing he did was meet with Mary Ann Gowdy, his advisor and an assistant teaching professor in the Division of Plant Science and Technology. Among many topics, Gowdy mentioned that she had recommended Walden for a newly created scholarship – the Henry Kirklin Memorial Scholarship.

Walden said he was appreciative of being put up for the scholarship and even more excited when he was named as the first recipient of the award.

“It was astounding to receive this scholarship and I’m so thankful,” Walden said. “I pay for college through work and the benefits I get through the Missouri National Guard. Sometimes I do need some extra assistance. This scholarship goes a long way to help support me as I finish my education.” 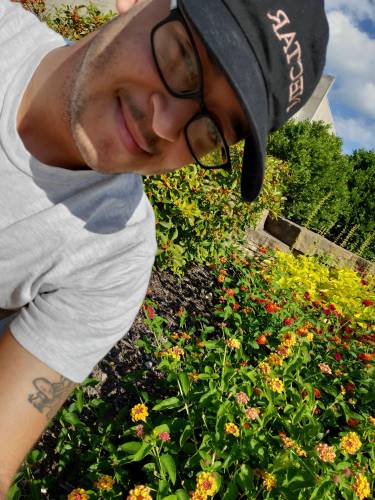 Kirklin (1858-1938) was a former enslaved person who became a prize-winning gardener and horticulturist and a successful businessman. After joining MU’s horticulture department as a gardener and greenhouse supervisor, he may have been the first African-American to teach at the university, although in an informal, unofficial capacity, as the university did not allow Black people to hold official teaching positions during his lifetime.

The scholarship will be awarded annually to underrepresented minoritized students studying plant sciences. Along with the scholarship, Mizzou and the College of Agriculture, Food and Natural Resources (CAFNR) also dedicated a lab – the Henry Kirklin Plant Sciences Learning Laboratory – in his honor last year.

“This entire experience has opened up my eyes in a lot of ways,” Walden said. “Once I received the scholarship I started doing more research about Henry Kirklin, and it was really incredible to learn more about him. This has also helped me connect at a deeper level with my grandmother, who was a civil rights activist growing up. It’s been so rewarding to talk to her and share that I’m first person to earn this award, as well as explain about the new opportunities for minority students.”

Walden enlisted in the Missouri National Guard in 2017, the same year he started at MU. Walden grew up in St. Robert, Mo., a gateway community to the United States Army Fort Leonard Wood. It was on that military base where he developed an interest in plant sciences.

“I worked with the Fort Leonard Wood’s Directorate of Public Works – Natural Resources and started to learn a lot more about forestry and plant science,” Walden said. “I found out quickly that I really enjoyed those areas of study. When I picked a degree program at MU, plant sciences seemed like a more broad degree, so that’s the direction I went.”

Walden also had a big interest in greenhouse management when he came to Mizzou. Gowdy helped connect him with numerous opportunities with the greenhouses on campus. Walden has had a chance to work in a good portion of those greenhouses, including the East Campus Plant Growth Facility.

“Mizzou has some of the most interesting greenhouses, including some on the top of the Bond Life Sciences Center,” Walden said. “I was really sold on coming here when I learned about those opportunities.”

As one of the more senior students with greenhouse experience, Walden gets to wear many different hats within the greenhouses at MU.

“I don’t just work with the plants, it’s a lot of management,” Walden said. “I would say 70 percent of my job is maintenance, with a focus on taking care of the greenhouse to make sure the projects run smoothly. The rest of my time is focused on the actual research projects, where I do many tasks, including a lot of work with pest management.”

Walden’s work with the greenhouses around campus touches on experiential learning, a key part of the RISE Initiative. The RISE Initiative states that all CAFNR undergraduate students will take part in at least one signature experience while on campus: Research, International, Service Learning and Experiential Learning. Experiential learning offers students real-world learning experiences outside of the classroom, through industry engagement, internship programs and learning laboratories.

Walden works closely with Michelle Brooks, greenhouse coordinator in the Division of Plant Science and Technology. Along with working with Brooks, Walden added that having Gowdy as an advisor has been huge for him as helping with pandemic relief hasn’t been the first time he has been called into action with the Missouri National Guard. He’s helped with flood efforts in the past, among other trainings.

“I’ve been very lucky to have Dr. Gowdy as my advisor,” Walden said. “I’ve been activated a few times and she’s been instrumental in helping me as I go back and forth from MU.”

Walden’s pandemic relief started out with him assisting veterans and filling in for nurses when he was needed. He briefly conducted COVID testing before being trained to administer vaccinations. Walden also helped with paperwork and data collection so that the state could keep track of everything happening. Walden also helped manage inventory of the medical supplies.

“I love being in the Missouri National Guard and serving my fellow Missourians,” Walden said. “This was a really rewarding experience, as I traveled to smaller communities and towns where isn’t as much medical access. I was given a lot of responsibility, which provided me a great logistical learning opportunity.”

Walden said he is still thinking through what type of career he would like to pursue in the future. He’s enjoyed his time working as a greenhouse technician, and is looking at potential opportunities in the world of natural resources.

“I’ve learned so many things since I came to MU,” Walden said. “When I first got here, I really stuck to myself. Being involved in the Division of Plant Science and Technology and working with the faculty and staff has really given me the opportunity to step outside of my comfort zone. I’m really excited to see what the future holds.”