With just a couple days left before he graduated from Palmyra High School, Chase Goldinger’s friends thought it would be funny if he made a YouTube video about him working out on his family’s farm.

Goldinger thought the idea actually sounded like a lot of fun.

“I put something together real quick and showed it to all my friends,” Goldinger said. “We had a good laugh at it. I think it got like 12 views, which was honestly a bit discouraging. But I made another video and then another one. It was the snowball effect; I was really enjoying putting them together.”

Goldinger’s first video went live in mid-2020. When he started at the University of Missouri a few months later, he debated putting a stop to posting videos, since he wasn’t on the farm to gather content as often. The same friends who told him to begin the channel, a group he rooms with at Mizzou, encouraged him to keep going.

“They said I had to keep it up,” Goldinger said. “I figured I could find enough content to keep the channel moving along.”

In just two years, Goldinger’s YouTube channel has gained nearly 8,000 subscribers, who follow along as Goldinger features life on the farm and the hands-on learning opportunities offered through the agricultural systems technology (AST) degree program at MU. Goldinger, a sophomore, is majoring in AST.

“When I first started out, I really only wanted to focus on old tractors, but I soon found out this is not what people wanted to watch,” Goldinger said. “They like to hear the words broken, stuck and junk. I learned that you have to make the video appeal to as wide of an audience as possible to get impressions. Eighty percent of my views come from my videos showing up in the related video listing after an individual has watched a video similar to mine.” 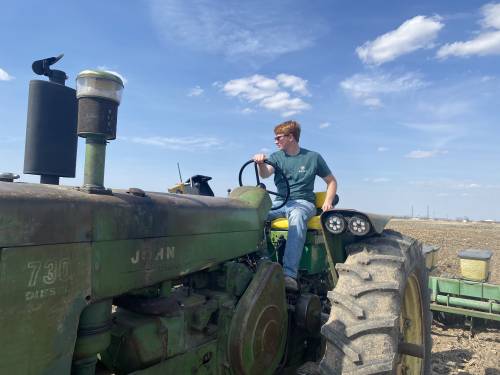 Goldinger said he chose the agricultural systems technology program because he felt like the degree would be beneficial when he eventually returns to his family’s row-crop farming operation, which is what he plans to do after graduation. Goldinger is a third-generation farmer. He grew up on his parents’ farm and took a more active role while in high school.

“AST is definitely one of the most hands-on majors,” Goldinger said. “The faculty within the program really give us some great opportunities to interact with a variety of technology. It’s a really interesting program.”

Goldinger is a third-generation Mizzou student, too, as his father and grandfather both earned degrees from MU.

At Mizzou, Goldinger showcases some of the work that he does at Bradford Farm, part of the Missouri Agricultural Experiment Station. He does a variety of tasks at the farm, some of which makes it onto his YouTube channel. He said he always makes sure that the researchers have signed off if he does any recording.

“At Bradford, my main job is to do whatever I’m told,” Goldinger said. “In the span of a week, I may disc corn stalks, mow corn stalks with a batwing mower to control residue, and make a trip to campus to deliver tables and chairs. You really never know.

“I don’t feature a ton of work out at Bradford, mainly because it’s not my stuff. But there are some really great opportunities that I can’t pass up.”

Goldinger’s work at Bradford Farm, as well as his involvement in the AST Club, touches on experiential learning, a key part of the RISE Initiative. The RISE Initiative states that all CAFNR undergraduate students will take part in at least one signature experience while on campus: Research, International, Service Learning and Experiential Learning. Experiential learning offers students real-world learning experiences outside of the classroom, through industry engagement, internship programs and learning laboratories.

Goldinger said that between his job at Bradford and his YouTube channel, he’s able to pay off his rent each month.

“It definitely helps with the cash flow,” Goldinger said. “I reached the point of monetization in December 2020 on the channel, so that was a really nice bonus.

“I’m definitely proof that anyone with a smartphone and a Wi-Fi connection can do YouTube.”

Goldinger said he plans to continue uploading videos throughout his time at MU. His work has already opened up several doors to work with others.

“I’ve been invited to several shows and at those shows, I’ve had people recognize me, which seems crazy,” Goldinger said. “I’m in cahoots with people who I never thought I would be in touch with. I’ve been able to make some great connections.

“My only goal with the channel is growth. I don’t want to compare myself to other channels; you’re playing a losing game if you do that. Plus, you’re at the mercy of the Internet, so it doesn’t help to stress over it.”