When Jermayne Smith began the search for a graduate school experience he had one main goal in mind – find a project where he could work with small mammals. Samniqueka Halsey, an assistant professor in the School of Natural Resources within the University of Missouri College of Agriculture, Food and Natural Resources (CAFNR), had the perfect research idea in mind.

“Participating in this project, and working with Dr. Halsey, has been really fun and very rewarding,” Smith said. “Dr. Halsey is such a hard worker. She sees the potential of her students, which I really love. The fieldwork that I’ve been able to complete has been awesome. It’s been a great experience all the way around.” 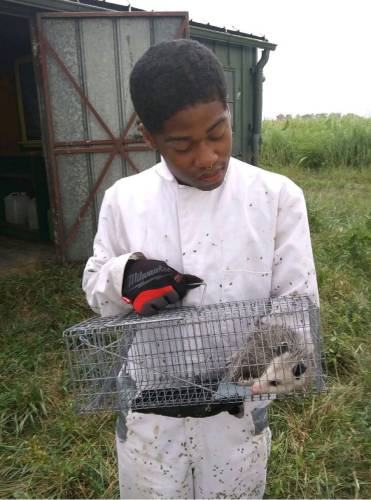 Smith, a master’s student in natural resources, set traps and made weekly checks to see what small mammals he caught. Details from each captured animal were recorded – including species, sex and tissue samples – and each animal was combed for ticks. Smith said they were looking for blacklegged ticks, also referred to as deer ticks. He added that lone star ticks and Gulf Shore ticks were actually more common during his time on the project.

Smith’s research took place in two primary locations – Prairie Fork Conservation Area and Tucker Prairie. Prairie Fork, where the majority of Smith’s research took place, is a restored prairie. Tucker Prairie is the largest remnant prairie in mid-Missouri. Smith said tallgrass prairies are one of the most endangered ecosystems in North America and that small mammals play vital ecological roles in those types of systems.

Smith compared the data he collected in 2020 to four previous years – 2004, 2008, 2012 and 2016. He said that there was no significant difference in species abundance between the remnant and restored prairies. He added that prairie age did influence species abundance and diversity, with older prairies having increased species.

“This research can help understand how management actions aimed at restoring tallgrass prairies can affect the small mammal community and subsequent influence on tick vectors of disease in central Missouri,” said Smith, whose emphasis area is in fisheries and wildlife.

Along with the opportunity to work with small mammals, Smith said the hands-on learning opportunities within Halsey’s lab were too good to pass up.

“That’s who I am – I learn best when I’m doing hands-on work,” Smith said. “That’s what drew me to Dr. Halsey’s lab. I definitely prefer fieldwork to sitting in a classroom. This project, for example – it was fascinating to see which mammals we caught. I’ve worked with so many great people, too.”

Smith earned an agriculture sciences degree from Tennessee State University, with a minor in animal science. Smith grew up in Memphis, Tennessee, where he developed a passion for animals at an early age.

“We had a lot of pets growing up,” Smith said. “We had guinea pigs, dogs, cats and chickens. I even had my own snake. I’ve just always had a huge passion for animals.”

Smith is currently finishing up a paper related to his research. He has already presented on the project during a conference.

“I get really nervous with public speaking, so that experience was definitely an interesting one,” Smith said. “But I really enjoyed it overall. I obviously knew the topic I was covering, so that helped out a lot. I also got some really good questions, which was a big bonus.”

Smith said that he is still deciding what he would like to pursue in the future. He said he knows that the future will involve animals in some form.

“If it deals with animals, I’m intrigued,” Smith said. “I would like to study mammals, but I don’t know the specific type of mammal at this moment. One thing that I haven’t been able to do is work at a zoo. I’ve had a lot of opportunities related to animals, but not in that realm. A career as a zoologist is something that I think really sounds interesting.”

Smith added that he has already received several offers and is taking his time on making a decision, making sure to take everything one step at a time. He’s primarily focused on finishing his paper and graduating.

“It’s been a journey,” Smith said. “I really love being at MU. I’m so thankful for the opportunities that I’ve been presented.”