While he was plenty familiar with everything the University of Missouri had to offer, when Jacob Wolken transferred to Mizzou he said there was still a bit of a learning curve. That’s where Laura Hertel’s expertise came in to play.

“I made the decision to transfer to MU a bit late, and she helped make the transition much easier,” Wolken said. “I was comfortable with the switch, but it was nice to have someone in my corner who I could ask questions to and get valuable information from. I still ask her plenty of questions.”

Wolken grew up around agriculture and was raised on a cow-calf operation in California, Mo. Like many of his friends, he participated in FFA where he made multiple trips to the Mizzou campus for state convention. Wolken has many family members who earned degrees from MU as well.

“It seemed like I was always in Columbia for some reason or another,” Wolken said. “It was nice to finally become a Tiger myself.” 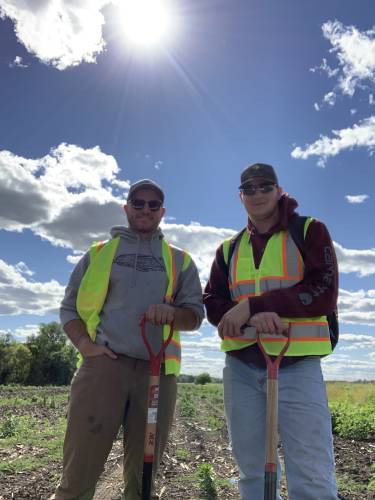 Wolken, now a senior, transferred after his freshman year at Lindenwood University. He kept the same major when he arrived at MU – environmental sciences. Wolken’s emphasis area within the degree program is land and soil. The degree allows Wolken to expand his knowledge on helping family farm operations, something that is important to him, having grown up in that world.

“I really liked that the environmental sciences degree had a strong connection to sustainable agriculture,” Wolken said. “One of the biggest problems that gets talked about continually is us having to feed more with less. This degree program showcases how we can prepare for the future through maintaining your soil and your land, and the best way to manage both. I’ve learned a lot about how family farms can do their part and play a vital role in that future.”

Wolken added that the major features multiple topics related to agriculture, giving a well-rounded view of the discipline. He was able to add to his experiences through a job at the Soil Health Assessment Center (SHAC), too, a position that Hertel was able to help him secure.

“My work with the SHAC was a really good experience all the way around,” Wolken said. “I was able to do multiple lab tests related to soil, which allowed me to apply what I was learning in the classroom to a real-world setting.”

While working in the SHAC, Wolken was able to make several connections as well. He met fellow environmental sciences students Luke Eaton and Sarah Higgins, who invited him to join the soil judging team. Wolken was also a member of the Soil and Water Conservation Society.

“I had participated in that judging team through FFA, so I had a rough idea of what was going on,” Wolken said. “Once I got started, I was able to gain a whole new group of friends. I really enjoyed being a part of the team.”

Wolken’s friendship with Eaton paid major dividends down the road, too. After graduating in May 2021, Eaton went to work with Sustainable Environmental Consultants. Eaton reached out to Wolken about an internship opportunity with his employer, which Wolken jumped at immediately.

“It was such a good fit and a really exciting opportunity,” Wolken said.

Wolken served as an agronomist support intern, doing a little bit of everything during his time with the company. He took soil samples in northern Iowa, which included interacting with numerous farmers. He was able to develop computerized models for several farm operations, as well as work in a few big feedlots in Kansas.

“Every experience was really cool,” Wolken said. “I also loved how hands-on every project was. That was a big draw when I originally chose the environmental sciences degree program. I wanted to get out as much as I could.”

Wolken’s internship experience with Sustainable Environmental Consultants touches on experiential learning, a key part of the RISE Initiative. The RISE Initiative states that all CAFNR undergraduate students will take part in at least one signature experience while on campus: Research, International, Service Learning and Experiential Learning. Experiential learning offers students real-world learning experiences outside of the classroom, through industry engagement, internship programs and learning laboratories.

“The internship really opened my eyes to what’s out there, as far as career opportunities,” Wolken said. “Those learning opportunities are vital for all students as they begin to think about their futures.”

Wolken will graduate in May. He said he is currently checking out the job market and is working on finding a track that is focused on agriculture.

“My goal is to go out and find an enjoyable career path and eventually move back closer to home to take over the family farm,” Wolken said. “I’m excited for both – to gain some valuable real-world experience and take it home and apply it on the farm.”