During his final semester at the University of Missouri, Quentin Harris served as a certified tax preparer through the Volunteer Income Tax Assistance (VITA) program – an experience that changed the course of his life.

Harris, who earned a degree in personal financial planning in 2018, prepared taxes for Mizzou students and individuals throughout the Columbia community through the VITA program. When Harris began his professional career the next year with the Wintrust Financial Corporation, friends continued to reach out to see if he was still preparing taxes. While that wasn’t Harris’ focus at the time, he decided to help out. The next year, even more individuals reached out.

“In Year 4, I decided to brand me a tax and consulting firm,” Harris said. 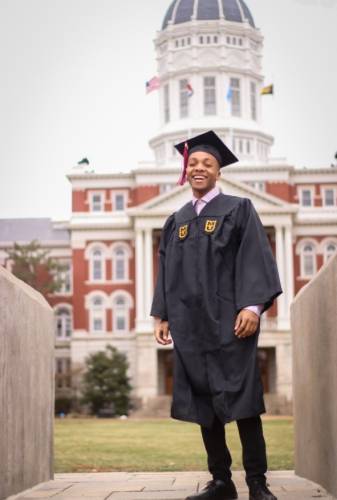 “My projections, as well as some early discussions, show that we could be in up to 14 states,” Harris said. “We broke even in the first year, and I’ll be bringing in a staff of three people this year.”

Harris does a variety of work for his clients, including preparing their taxes and helping them prepare for the future, which includes creating weekly, monthly and annual budgets. One of his long-term goals includes growing as a tax expert for individuals and small business.

“It’s very empowering, having my own firm,” Harris said. “It’s a lot of work, but it’s a lot of fun. I love helping people – I get that from my parents. They’ve always been caretakers and people with good hearts. I got that trait from them. It’s always been a goal of mine to make an impact where it counts. For me, that’s through finances. I can show individuals how I can make them more money and help them save for the future.”

Along with his personal firm, Harris serves as a franchise portfolio manager with the Wintrust Financial Corporation. He joined the corporation as a wealth credit analyst intern right after his junior year before obtaining his personal financial planning degree. Harris had previous banking experience, working for nearly a year at Landmark Bank before graduating from the University of Missouri and moving to Chicago.

“I had a good feel for banking and started researching the best banking markets across the country,” Harris said. “That led me to Chicago and to Wintrust. I felt like they had a great customer service record, and they thankfully took a chance on me. I was very grateful to get in.”

After his internship, Harris worked with Wintrust Commercial Banking for almost three years as a rotational credit analyst – obtaining experiences in asset based lending; commercial and industrial (C&I) loans; CRE loans; and employee stock ownership plans (ESOP) – before taking a permanent role as a franchise portfolio manager. That role is helping prepare Harris for one of his other long-term goals – becoming a national franchise finance lender providing multiple million-dollar facilities to franchisees.

“What I do now is really interesting, as I’m part of a national platform and work with a national team,” Harris said. “I deal with major franchises, such as McDonald’s and Taco Bell, Wendy’s, Dunkin Donuts and many other top-tier brands.”

Harris grew up in Kansas City, Mo., and attended the Paseo Academy of Fine and Performing Arts, a magnet performing arts high school. Harris played the viola throughout his time at Paseo Academy.

Harris began his freshman year at Mizzou in 2014, as a first-generation college student.

“It was definitely tough,” Harris said. “It was difficult to understand how everything worked at times. I’ve always been a hard working individual, though, and I pushed myself at every chance. And while there were some struggles, it was also an amazing experience. My family and friends lived the college life vicariously through me. The younger generation of my family look up to me, too, and want to follow in my footsteps. That’s really exciting.”

“The faculty and staff are so supportive and are always there for their students,” Harris said. “They want to advance our futures – or just talk with us about life in general. They were very, very helpful during my time in the program.”

With his personal finance experience, combined with his work with various big franchises, Harris’ experiences offer a unique mix.

“I do bring something a little bit different when it comes to understanding how entities work,” Harris said. “I’m a little more dangerous than an accountant because of those experiences, especially my work with businesses. I’ve learned a lot and am continuing to learn.”

In his young career, Harris has also been very active with the Financial Services Pipeline (FSP) Initiative. FSP is focused on increasing the representation of Latinos and African-Americans within the Chicago area financial services industry. Harris has been featured as an emcee for the national conference multiple times.

“It’s important for individuals like me to speak up more,” Harris said. “We don’t control our perception a lot of the times; that perception is just given to us. In college I had dreadlocks and if I was walking down the street, I know I was perceived as one thing. When I opened my mouth, though, that perception changed.

“FSP is a group that I’m very proud to be a part of. It’s exciting to help others be successful in the corporate landscape and guiding them on how they can be successful.”

The CAFNR Career Services office recognizes career development as a lifelong process and is committed to helping students think about their future and work to make that future a reality. CAFNR has been incredibly successful in that regard as 99.0 percent of CAFNR graduates report a successful career outcome, such as employment, continuing education or military service, within six months of graduation. Also, 85 percent of CAFNR students are employed in a field directly related to their degree program after graduation.