As a student assistant with the University of Missouri… Expand ▸

My Why: For the love of the game and for the next generation of women in football

Amelia Wilson wrote those words on a notecard last semester, her first at the University of Missouri. They represent Wilson’s passions – not only for football but for showcasing to young girls that they have a place in the game she loves.

Wilson got to live out her passion last fall, serving as a student assistant with the MU football team. She wore multiple hats during the season, from breaking down game film to helping on the sidelines during game day.

“Football has always been part of my life, so to be able to be part of the Mizzou squad last season was truly incredible,” Wilson said. “I’m so grateful to Coach (Eliah) Drinkwitz for giving me this opportunity to get my career started.”

Wilson comes from a family of football fans. Her father was born in west Philadelphia and grew up a massive Philadelphia Eagles fan. He played college football at the University of Wisconsin-Whitewater, and briefly spent time with the New Orleans Saints in the National Football League (NFL). 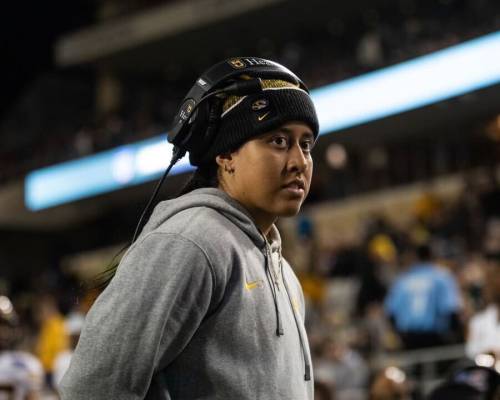 “I watched football with my pops all the time growing up, and I bleed that Eagle green, too,” Wilson said. “I fell in love with the game right away. I even talked my parents into letting me play tackle football for a year, in the fifth grade.”

Wilson followed in her father’s athletic footsteps, playing basketball for more than a decade. It was actually a basketball injury that jumpstarted Wilson’s desire to look into football coaching. She hurt her knee during her junior year of high school, ending her playing career.

“At the time of my injury, I started seeing women making inroads in coaching,” Wilson said. “Seeing those women – like Katie Sowers, Lori Locust and Jennifer King – that really got me going. I knew I wanted to get into football coaching, and they really gave me that extra motivation. I told my parents that I didn’t know how I was going to do it, but I was going to a find a way to get into coaching.”

Wilson’s high school P.E. teacher in Maryland helped her get connected with MU. He knows and has kept in touch with Bush Hamdan, the quarterbacks coach at Mizzou. Her teacher made a phone call and Wilson was suddenly heading to a state she had only ever driven through.

“Football was definitely what brought me to the University of Missouri – MU honestly wasn’t really on my radar,” Wilson said. “When I found out I was going to have this opportunity, I immediately accepted the offer. To start out in the Southeastern Conference (SEC), I couldn’t pass that up. I’m so grateful and appreciative of the opportunity, especially to Coach Hamdan for taking me under his wing.”

Wilson was in charge of several projects throughout the season. After the games, she would create charts related to the play calls the team made. Those charts were important in helping the coaching staff make sure the Tiger offense didn’t become too predictable. Wilson also broke down tape of upcoming opponents. During the game, she would hold up offensive and defensive personnel boards.

“This experience, it’s been a dream come true,” Wilson said. “It was overwhelming at times, just because everything moved so fast. It’s been important for me to slow down and take it one step at a time.”

“It’s almost a full-time job,” she said. “But my past experiences really helped me understand that this is about being a student first. I take my academics very seriously. Finding the balance is important.

“Communication is also vital. The coaches have been so great to work with, and they understand that if I don’t have good grades I can’t do this.”

Wilson said seeing the behind the scenes work that the coaching staff does was really enlightening as she prepares for her future. She said her interactions with the players was incredibly rewarding as well. 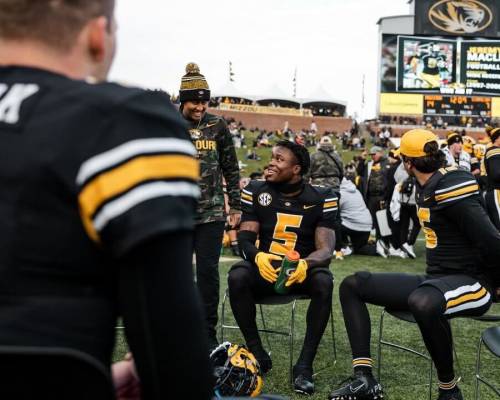 “They accepted me as one of their own, which was a big thing for me,” she said. “I didn’t know how they were going to react – but they were all so welcoming. It made the transition so easy.”

Wilson’s experience with the MU football program touches on experiential learning, a key part of the RISE Initiative. The RISE Initiative states that all CAFNR undergraduate students will take part in at least one signature experience while on campus: Research, International, Service Learning and Experiential Learning. Experiential learning offers students real-world learning experiences outside of the classroom, through industry engagement, internship programs and learning laboratories.

Wilson is majoring in parks, recreation and sport. During her freshman semester, she routinely met with her academic advisor, Jenna Fusinatto.

“During my first few weeks on campus, I really didn’t know what to do,” Wilson said. “Jenna had me print out my schedule and she really helped me plan each day so that I could be as efficient as possible. I met with her each week – sometimes it was to just talk about life in general. Those meetings were incredibly important for me.”

Wilson added that those meetings helped her slow down, even as life has moved very fast. At the moment, she’s enjoying each new experience.

“I’m the type of person who likes to live in the moment, and I’ve learned to really enjoy each moment,” Wilson said. “I’m very blessed. My first semester featured so many firsts and I’m soaking it all in. I can’t get these moments back.”

Wilson said she is also working hard to follow in the footsteps of her role models, such as Sowers, Locust and King. She appreciates the opportunities they’ve created for women coaches across the country.

“Without them, none of this is possible,” Wilson said. “My thanks goes out to each of them. The fact that so many people are supportive and behind the movement, it’s starting to become the norm. As women coaches, all we want is for it to be the norm. We’re capable of doing the work – we just want the same respect.”