For several years, the Block and Bridle Club at the… Expand ▸

Each fall, Kansas City is home to a premier event that has been around for more than a century – the American Royal. The various competitions held throughout the event include world-class livestock and horse shows. 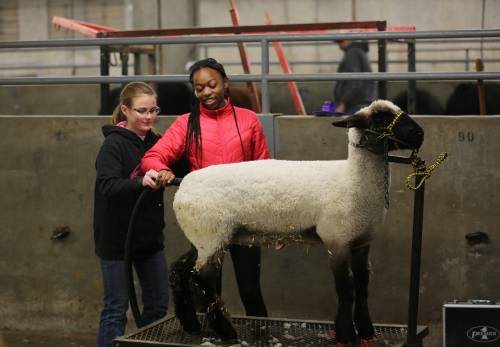 For several years, the Block and Bridle Club at the University of Missouri has held their own version of the American Royal – the Little American Royal. The Little American Royal is a student-led livestock show that allows students of all backgrounds to experience the caring of a livestock animal, as well as preparing it to show. Students compete in a live show at the end of the weeklong program. This year’s event was held in mid-November.

“Each year, we bring in sheep, goats, dairy cattle, beef cattle and hogs for students to care for and train for a show environment,” said Caleigh Grote, a junior majoring in animal sciences, who is the chairman of this year’s Little American Royal. “The animals come from Mizzou farms, as well as individuals around the community who have been gracious enough to loan them for this event.”

When participants first show up to the Trowbridge Event Center to begin preparations, they choose a species to care for and train. There are a variety of experience levels for those who sign up – from students who have shown since their youth to students who have never interacted with animals in a hands-on capacity. 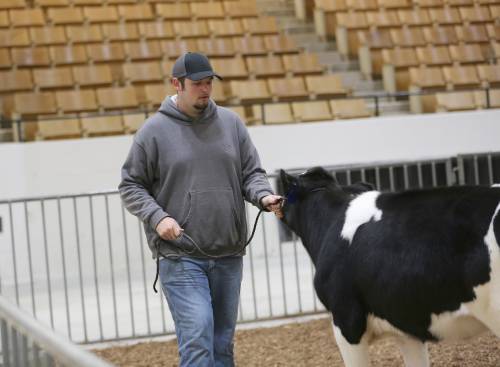 Jaron VanHouden grew up on a farm and had experience with beef cattle. However, VanHouden, a freshman studying animal sciences, had never shown before.

“I didn’t even know showing existed until I signed up for this event,” said Alex Walker, a freshman studying animal sciences. Walker, who grew up in the suburbs of Chicago, said she didn’t grow up around traditional livestock animals. “It’s been very interesting. I’ve been pushed out of my comfort zone, and I’m so glad that I’ve been able to have this experience. All of the animals have their own personalities, and I’ve learned so much from everyone involved.”

Walker chose to work with sheep for the Little American Royal.

“When I first tried to flip a sheep, I was the one who got flipped,” Walker said. “I really thought sheep might be a bit easier to work with but that was definitely not the case. It’s been a really eye-opening experience.”

While Walker had never shown before the Little American Royal event, Quincy Wiegand has been a regular in the showing circuit since she was young. Wiegand, a freshman majoring in agribusiness management, grew up in a rural Missouri community and has shown each of the species offered through the event.

“I’ve shown livestock my entire life – it’s a big part of who I am,” Wiegand said. “Being on campus, I haven’t been able to spend a lot of time with my livestock back home. This has been a great opportunity to jump back in the show ring and do something I’m passionate about. 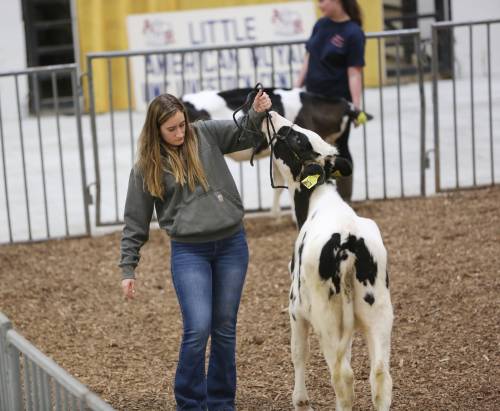 “It’s so rewarding to be around students who have never shown before, too. The coolest part for me has been sharing the knowledge that I have. This is such a great hands-on learning opportunity.”

After choosing their species, the students take full responsibility of the animal for the entire week. Students do day-to-day tasks, such as feeding, watering and cleaning the pens. They also train the animals for the live show, as the majority of the species have not been prepped for the ring.

“This program teaches us the responsibility of tending to the needs of each of the animals,” said Jaron VanHouden, a freshman majoring in animal sciences. “It’s been important for me to broaden my horizons a bit with this program.”

VanHouden grew up on a farm and has experience with beef cattle. He had never shown before, though.

“It’s been a lot of work, but seeing that hard work pay off at the end is really rewarding,” VanHouden said.

After the week of hard work caring for the animals and preparing them to show, the Block and Bridle Club hosts a competitive livestock show in Trowbridge. Winners are crowned for each species, as well as an overall winner. 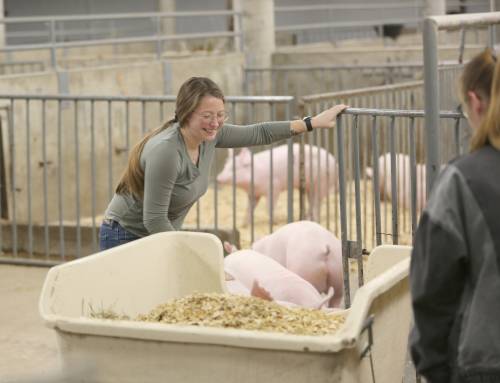 “I always wanted to show animals but never had the opportunity,” Elly Thomas-Stahle said. Thomas-Stahle, a freshman studying animal sciences, picked hogs as her species to work with during the program. “I had gone to 4-H shows and watched, so I was excited to participate in the program and get that experience, too.”

The Block and Bridle Club’s purpose is to promote all areas of animal sciences. The unique aspect of the club is that it deals with all livestock species. The Little American Royal event showcases that uniqueness.

“What drew me to the animal sciences program at Mizzou are the hands-on learning opportunities,” said Grote, who participated in the Little American Royal last year before helping lead it this year. “I was thrilled to be part of this event last year, and it really was a blast. It’s been really rewarding to help lead the program this year.”

The Little American Royal touches on experiential learning, a key part of the RISE Initiative. The RISE Initiative states that all CAFNR undergraduate students will take part in at least one signature experience while on campus: Research, International, Service Learning and Experiential Learning. Experiential learning offers students real-world learning experiences outside of the classroom, through industry engagement, internship programs and learning laboratories.

“I just became the new advisor for the Mizzou Block and Bridle Club earlier this year, but I am already enjoying the opportunities the club has created for students with an interest in animal agriculture,” said Tawnie DeJong, instructor in the Division of Animal Sciences. “It was so exciting to see the students coming together during the week to assist and teach each other, and to really support each other through the whole process. I am excited to see how the next group of leaders makes the event even bigger and better next year!”