Lowell Mohler says he’s had a good life focused around three things – family, friends and “a lot of luck!”

While you can debate whether the third one is really “luck” or a lot of hard work, there’s no question he’s had a good life – and one that has had a front seat to – and a big hand in – many advances for Missouri agriculture and conservation. 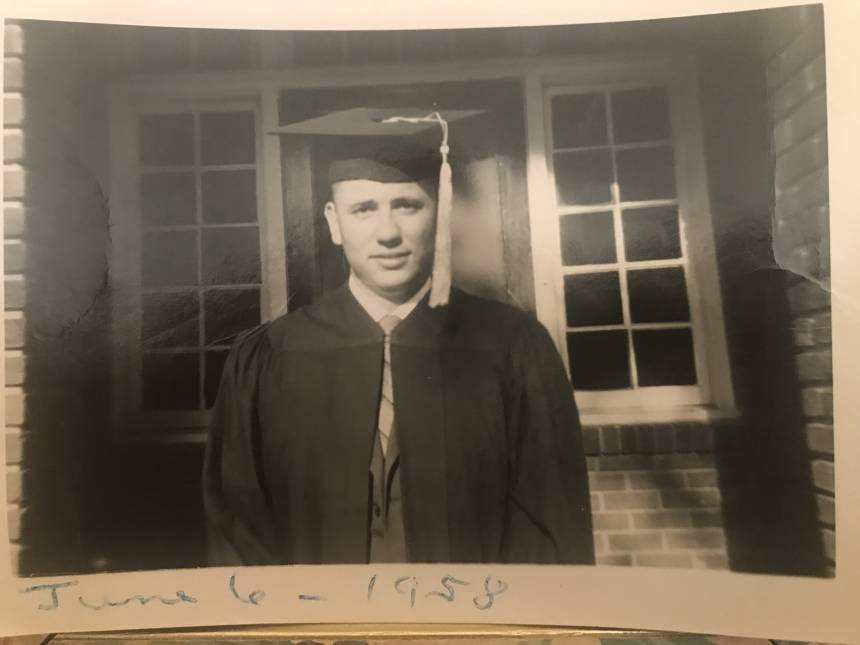 Lowell on his graduation day from Mizzou in June 1958. Photo courtesy of Lowell Mohler.

Lowell (BS Ag ’58) was honored Friday, Nov. 12, 2021, with the 66th Annual Distinguished Service Award from the Mizzou Alumni Association. He has also received the College of Agriculture, Food and Natural Resources’ Alumni Association’s Citation of Merit Award (1991); Alumnus of the Year Award (1997); and the college’s highest honor, the Frederick B. Mumford Award for Distinguished Service (2000). More recently, Lowell was honored with the Jay B. Dillingham Award for Agricultural Leadership and Excellence – the highest honor from the Kansas City Agribusiness Council (2018).

He didn’t come to Mizzou until he was a junior, after spending two years at Northwest Missouri State University, which was close to his hometown in Holt County. Even though he only spent two years in Columbia, Lowell made the most of his time here.

“We had a really bad farm year in 1956,” Lowell says. “I then got serious about college and transferred to Mizzou.”

He was part of a meats judging team that went to nationals, and also joined Alpha Gamma Rho fraternity, where he made many life-long friends, including roommate Jerry Litton. Jerry (BS Ag Journalism ’61) was national secretary for FFA (after serving as state president) and later went on to serve as a U.S. Representative. Lowell says he learned so much from Jerry, who was tragically killed in a plane crash on the night of his upset win in the democratic primary for U.S. Senator in 1976.

“I went on and helped him in his first campaign,” Lowell says. “I did his policy, and Ed Turner [fellow CAFNR alumnus (BS Ag ’62) and former University of Missouri Curator] was his campaign manager.”

Ed remembers the campaign as one of the first times he turned to who he calls the “go-to guy” for so many people over the years in our state.

“He’s an incredible individual. People immediately trust him; they know he’s credible. I have witnessed Lowell’s extraordinary ability to lead and influence people. His organizational and communication skills are exceptional. Because of these talents, numerous statewide and local leaders have asked him to serve in high-level leadership positions,” Ed says of Lowell. “Whenever we’ve said over the years ‘Who are we going to get to do that?’ inevitably someone would say, ‘Well, call Lowell!’”

Lowell and Ed were both instrumental in establishing the Litton Leadership Scholars Program in CAFNR as members of the Litton Family Memorial Foundation Board. 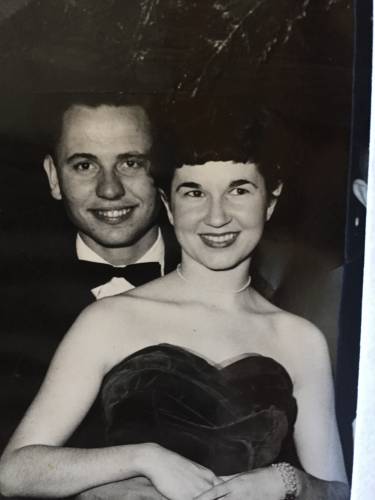 After graduating from Mizzou in 1958 with his agriculture degree (emphasis in meat technology), Lowell married his wife of 63 years, JoAnn. Lowell and JoAnn grew up in the same area – she was his first date in high school. JoAnn worked for different state departments during her career, including as executive secretary to Gov. John Ashcroft.

After six months in the military, Lowell secured an internship with the National Livestock and Meat Board promoting the meat industry across the country, and then took a similar position at the Kansas Board of Agriculture. Lowell performed TV cooking demos, cooking schools, state fair exhibits – promoting the use of American beef, pork and lamb.

After almost seven years with the Kansas Board of Agriculture he joined the Missouri Department of Agriculture as director of marketing. His job duties were similar to the Meat Board, with the addition of regulatory work and supervising a staff of 50. During the time Lowell was part of the department, “we got legislation passed to get check-offs started, too,” he says. “There was only one for apples on the books. Later we expanded to turkey, swine, corn and soybeans.

“That was really a big deal.”

He also took the trip of a lifetime during his first stint with MDA, touring Russia and parts of Europe with 30 fellow farmers as part of a People to People International trip, learning about agriculture in other countries.

“His position with Farm Bureau gave him an opportunity to really work the entire state, and meet an awfully lot of people in leadership positions in agriculture state-wide and county-wide,” says Ed. “You take Lowell to any area of the state and they still remember Lowell there.”

After retiring from Missouri Farm Bureau, Lowell was recruited by then-MU Chancellor Richard Wallace to advocate on behalf of the University at the Capitol in Jefferson City.

“I did that for three years while also continuing as a member of the State Fair Commission,” he says. 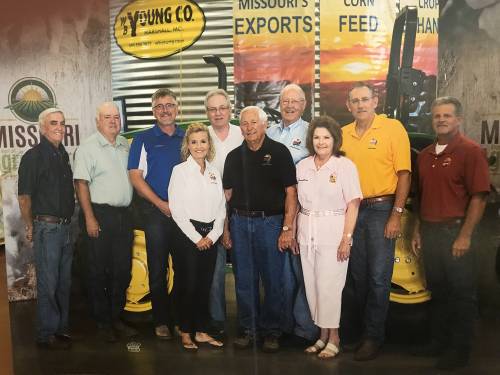 In 2000 Lowell went back to the Department of Agriculture, this time as director. 9/11 happened during this stint at MDA – so a lot of his work revolved around biosecurity and food safety. As head of the Department of Agriculture, he also continued to help plan the Fair. His legacy with the Missouri State Fair is marked by construction of a number of buildings – with the help of the general assembly, he adds – including the FFA Building, MO-Ag Theatre, the Missouri Electric Cooperatives Building, National Guard Armory and the new director’s pavilion. In 2003 he was honored with a building named in his honor – the Lowell Mohler Assembly Hall.

“He reinvigorated the Missouri State Fair, which draws hundreds of thousands of attendees to the event every August,” says Robin Wenneker (BS BA ’91), who nominated Lowell for the MAA Distinguished Service Award. He helped create the State Fair Commission, in addition to the buildings secured. Robin, a University of Missouri Curator and former president of the CAFNR Foundation, says Lowell also brought agriculture and conservation into better alignment in the state, changing how the agencies work together.

In 2003, Lowell was appointed to the Missouri Conservation Commission, and, during his time there, he was proud to help expand wetland areas in the state. In fact, the commission even named one after him near his hometown – the Lowell Mohler Wetland Unit, part of the Bob Brown Conservation Area in Holt County. 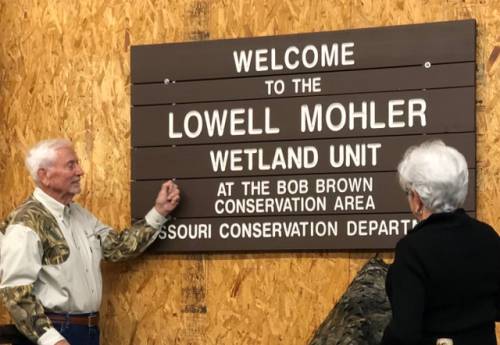 “It’s an area I used to hunt when I was a kid – and JoAnn’s dad farmed close to there,” he says. “It was a real pleasure to work with one of the country’s best conservation agencies.”

Lowell is currently part of the Mizzou Flagship Council, which he calls the “support team for Mizzou.”

“It’s done a lot of good for the MIZZOU campus,” he says. “I also enjoyed raising money for several CAFNR buildings that were badly needed over the years. This was very rewarding to me.”

He played a key role in advocating for CAFNR buildings including the Stringer Wing of Eckles Hall; the Anheuser-Busch Natural Resources Building, including Conservation Hall auditorium; the Bond Life Sciences Center; and multiple projects at the college’s agricultural research centers across the state.

His service to CAFNR has also included serving on the Vice Chancellor’s Leadership Council, For All We Call Mizzou Campaign Major Gifts Steering Committee, Bradford Research Center Advisory Board, School of Natural Resources Advisory Council, Vice Chancellor/Dean Search Committees and as a member of Monticello Society. 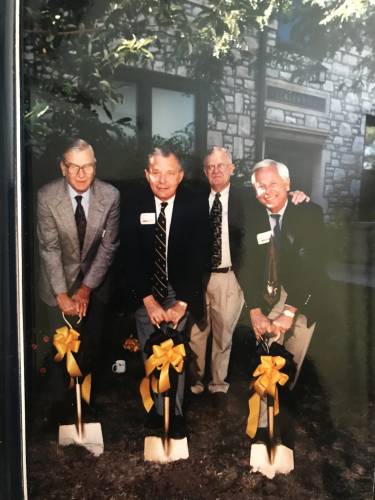 “I don’t know of anyone who’s been a better advocate for Mizzou, for CAFNR over the years,” says Christopher R. Daubert, Vice Chancellor and Dean. “It’s truly incredible how he’s served our college.”

Lowell has also served our state on the 4-H Foundation Board, the Missouri Conservation Heritage Foundation board, the Mizzou Extension Council, as senior vice president for Ducks Unlimited – and the CAFNR Foundation.

“He’s such a unique part of Missouri history,” Robin says. “Lowell is often considered ‘the voice’ of agriculture in Missouri. He touches all these amazing Missouri institutions and traditions, like the State Fair and its ham breakfast. He’s brought industries and key stakeholders together and has had such an inspiring lifetime of service. When I look at how innovative he has been; how many things he’s created… I’m just honored to be a part of him being recognized, as such an incredible alum for Mizzou.”

Robin remembers hearing about Lowell from her father, who was a classmate, fraternity brother and friend. Later, Robin and Lowell served on the Foundation together, where he was “always very supportive and, as the first woman on the board, helped me identify where I could be most successful in my board service,” she says.

“Lowell has never forgotten about the university,” Robin says. “Everything he did he found a way to tie Mizzou and CAFNR back in.”

“They gave a lot to me,” Lowell says of his time at CAFNR and Mizzou. “I always figured I needed to pay it back.” He appreciates how the school has always remained strong, and that Mizzou leadership has always supported agriculture. He cites University of Missouri President Mun Choi as an example of a Mizzou leader who has championed agriculture. Lowell considers Mun a good friend – one who even helped talk Lowell’s granddaughter, Sophie, into attending Mizzou, he says.

“She’s the only one of the grandchildren [he and JoAnn have eight] who has gone to MU,” Lowell says. Sophie is studying business.

Lowell and JoAnn’s three children, Christopher (BS Acc ’85), Craig (MD ’86) and Elizabeth (BS EdHD ’88), however, all have roots at Mizzou – although they all now live across the country (Colorado, Oregon and South Carolina, respectively).

Lowell says his mother had a “great fondness” for telling people her kids went to college; she herself was a graduate of the University of Nebraska. It’s clear he placed the same importance on a college education for his own children. 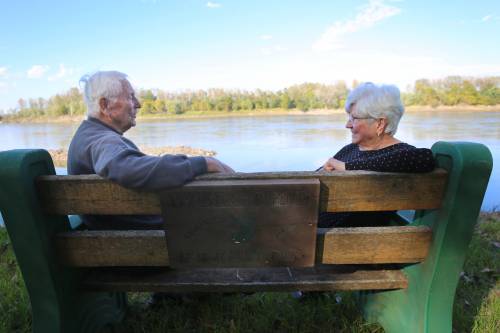 “Life, to me, is all about raising a family and seeing that your family goes on to even bigger and better things than you have,” he says. “We’ve always wanted our kids to excel in what they did – and they have! Those memories are just irreplaceable to us.”

And even as Lowell has also excelled in his career, it’s been with the heart of service and giving back. That goes for his most recent honor from the Alumni Association, which Ed says Lowell “deserves in spades.”

“Giving back to the University has always been a priority,” Lowell says. “I would have never been able to do what I’ve done over the years without Mizzou.

“We always had a kind of agreement in life – and we’ve had 63 years of it together – that we would not forget our roots; where we came from.”