As a freshman, Mason Ward took a chance and applied to the Freshman Research in Plants (FRIPS) Program with the thought that he would give research a try. Ward wasn’t sure if research would be a major part of his collegiate career, but figured by pushing himself he would certainly learn something new.

Now, three years later, Ward’s extraordinary research portfolio has earned him two undergraduate research awards from the Entomological Society of America (ESA). Ward earned the Undergraduate Student Achievement in Entomology award from the Plant-Insect Ecosystem (P-IE) section of the ESA, as well as the BioQuip Products Undergraduate Scholarship from the Systematics, Evolution and Biodiversity (SysEB) section.

“I really never expected any of this,” Ward said. “I’m so lucky to have such a strong support system of mentorship behind me. I’m obviously very happy to receive both honors – and appreciative of the guidance that has helped get me to where I am today.”

Ward, a senior plant sciences major in the University of Missouri College of Agriculture, Food and Natural Resources (CAFNR), developed an interest in entomology during his time in the Doniphan High School FFA chapter. One of his advisors encouraged him to take part in the entomology contest – which Ward did – and quickly found a passion for identifying bugs. 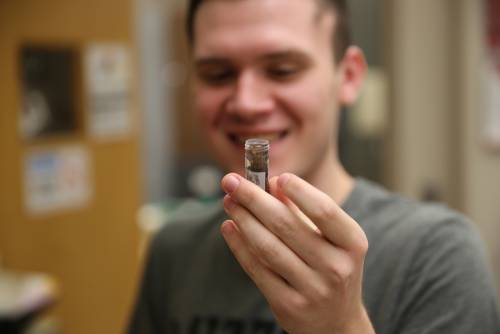 “I was happy to be able to bring that passion to college,” Ward said.

Ward’s first research project as a Mizzou student, through the FRIPS Program, centered on parasitoid wasp behavior on drought-stressed hosts. He worked with Debbie Finke, director of undergraduate studies and professor in the Division of Plant Science and Technology.

“When I first started looking for potential research projects, nothing really stuck out to me,” Ward said. “A lot of it was related to genetics, which I wasn’t necessarily interested in. Once I found Dr. Finke, though, I felt like there was some potential for some really cool research that fit my interests.”

Ward said that parasitoid wasps, which are considered to be beneficial because they help control many pest populations, are extremely vulnerable to drought events, as the changes in plant quality influence herbivore performance, which then affects prey availability and quality for natural enemies. Parasitoid wasp development is linked to that of their prey.

Ward’s work earned third place in the undergraduate research poster competition during Mizzou Life Sciences Week in 2019. The results from the research project were also recently published in Environmental Entomology.

“I was the only freshman to receive an award during this competition, so it was a super exciting and a major achievement for me,” Ward said.

The next year, as a sophomore, Ward briefly worked in the laboratory of Kevin Bradley, professor of plant science and technology. Ward served as a research technician and analyzed insects that were collected during pesticide trials. Heading into his junior year, Ward was named a McNair Scholar. However, after two years of research related to entomology, Ward was wondering if his passions were elsewhere.

“I had been a plant sciences major up to that point, but decided to switch to an agriculture major before my junior year,” Ward said. “I also thought that I may be interested in law school, so during my first semester as a McNair Scholar, I was pursuing law research. I found out, though, that research of that nature wasn’t really for me.”

Ward said the step back from entomology research was a positive in hindsight as it showed him how passionate he truly was about the subject matter. It also led him back to the plant sciences major.

“I had a lot of discussions while a McNair Scholar about finding the right research project,” Ward said. “Those discussions generally came to the same conclusion – you sound really passionate about entomology, why don’t you go back to that? I thought that sounded like a great idea.”

After working with Finke, Ward found another insect expert in CAFNR to work with – Robert Sites, a professor of plant science and technology. Last year as a junior, Ward worked with the family Naucoridae, known as saucer bugs or creeping water bugs. Naucoridae are predaceous aquatic insects that occur in tropical and non-tropical lotic systems across the globe. Lotic systems include all flowing inland bodies such as creeks, rivers and streams. 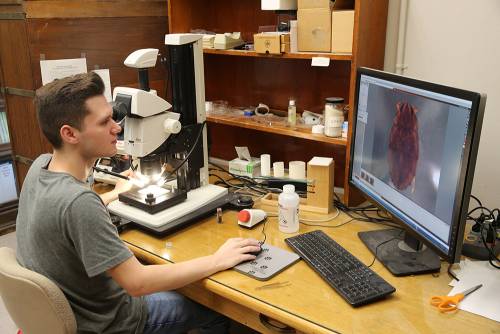 Within the family Naucoridae, Cheirochelinae is the only subfamily in which the development stages of the nymphs have not been described – until now.

“I was the first person to describe any of the nymphal instars in that subfamily, which is a really cool thing to be able to say,” Ward said. “This research has been so eye-opening and so, so rewarding.”

Ward will discuss his research projects in detail during Entomology 2021, the ESA’s annual meeting, which will be held in late October through early November. After presenting, Ward said he is focused on finishing his senior year strong. He will serve as Finke’s teaching assistant next semester and will graduate in May.

“Finding my niche with Dr. Finke and Dr. Sites has been super helpful,” Ward said. “Both of them have been extraordinary to work with. They have offered me such good support and continue to help guide me as I take my next steps after college.

“The research I’ve done is some of the most important work I’ve ever done in my life. I didn’t even know if I liked research or not when I began this path, so to look back at what I’ve accomplished is pretty incredible.”

Ward, who is a first-generation college student, said he plans to pursue his PhD after his time at MU with the hope of giving back and mentoring future students. He said that CAFNR’s hands-on approach to learning has been incredibly helpful for him as a student, and he hopes that he can bring that same style to future learners.

“I would love to eventually get a faculty position so that I can give back and mentor students,” Ward said. “I’m very focused on helping underrepresented minorities and members of the LGBTQ communities find their passion for science – that’s where my focus is right now. I would love to continue to research as well, but teaching is where I want to make an impact.”