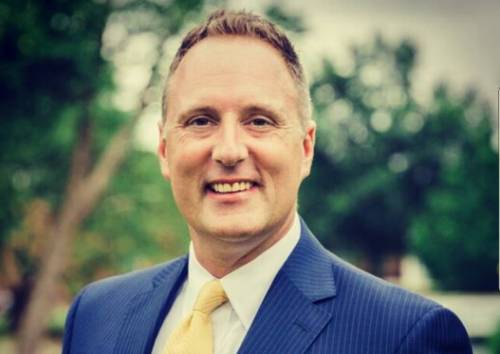 Shawn Poore wants to make a difference in the lives of others. And in his new role as the Executive Director of Advancement at the College of Agriculture, Food and Natural Resources at Mizzou, he says he is getting that chance to affect the lives of both alumni and students. Shawn joins CAFNR Sept. 1.

“I like to work where I can see the biggest difference in the lives of other people,” he says. “A lot of careers let you do that, but for a people person like I am, a fundraising position lets me use my ability to use communication skills effectively, but also lets me change someone’s life for the better.”

He says his main goal in his new position is to reconnect alumni to the college, helping them to feel more involved.

“I want our office to be a conduit for alumni and friends, to help them reengage – and also find their philanthropic passions,” he says.

Shawn is a sixth-generation Missourian (on both sides of his family) and grew up on the family farm in Knox County in northeast Missouri, which he still co-owns with his mother. He says he’s there most weekends – although they rent the land for cattle production, there’s always still a lot of tasks to complete – brush cutting, mowing.

His father was a local politician, and influenced Shawn’s career path – at least at first. After working in political fundraising for about six years, Shawn now has been in higher education fundraising for nearly 20 years and says he enjoys this sphere because of the lifelong relationships – from student, up through alumni. And then, he gets to watch the alumni inspire current students.

“You can actually see the opportunities that are developed for a young student to graduate, get out in the world,” he says. “What you’re doing is molding and shaping the next generation of alums.”

“It’s the programs, the people – it’s the students, and it’s the alums. There are a lot of passionate alums at a lot of universities, but I think the Mizzou alums are the most passionate I have worked with,” he says.

Shawn enjoys fishing, travelling and baseball – he’s attended spring training in Florida for many years. He’s also a big history buff – he says he is thrilled to be part of CAFNR, with its long history and what it has meant to the state of Missouri for so many years.

This position in CAFNR is the ideal fit for him, Shawn says. The College’s Vice Chancellor and Dean, Christopher Daubert, agrees.

“With his background in both leadership and major gift fundraising and his roots on the family farm, we are excited to bring Shawn’s enthusiasm and expertise to the CAFNR team,” Dean Daubert says.

“This was the right place at the right time,” Shawn says. “This position really opened up at the time I was looking for a leadership role. But it was also personal – it’s a great opportunity for me to use my background to advance the college.

“What can you expect from me? I’m a great listener, as well as someone you can depend on for follow-through,” he says.

“I want our office to be a service office for the alumni and friends of CAFNR. I want them to feel like we are a resource for them, feel comfortable calling if they have a questions or concerns. We have a great staff and are eager to help. Our office is open for business to serve our constituency.”