At the beginning of each semester, we welcome the new faculty members who have joined us. The College of Agriculture, Food and Natural Resources at the University of Missouri is proud to introduce 12 new faculty members this fall who are ready to immerse themselves in our core areas of teaching, research and Extension. Each of them brings a wealth of knowledge in their respective fields of study, and will be representing five of our six divisions: Animal Sciences; Biochemistry; Food, Nutrition & Exercise Science; Plant Science & Technology; and the School of Natural Resources. We are excited to feature the newest members who have joined us this semester:

Aldrich is an assistant teaching professor in the School of Natural Resources (SNR), where he leads courses in Atmospheric Science. He has been with SNR since 2004, where he first served as an adjunct instructor for meteorology. Previously, he worked in the office of e-learning at Mizzou, facilitating support for programs like Starfish, Canvas and iClicker. Aldrich earned an MS in Meteorology from CAFNR in 2011, as well as his undergraduate degree in 2001. He has been one of the broadcast meteorologists on KOMU in Columbia and is a member of both the American Meteorological Society and Missouri Broadcaster’s Association. Courses taught include introduction to meteorology, severe and hazardous weather, broadcast meteorology, synoptic meteorology and natural hazards. Aldrich can be reached at aldriche@missouri.edu.

Buecking is a professor and the division director for Plant Science & Technology. Previously, she served as a professor and head of the Biology and Microbiology Department in the College of Natural Sciences at South Dakota State University. Before taking the department head role, she was the associate dean for research. In her different administrative roles for the College of Natural Sciences, she was involved in stakeholder communication, strategic planning processes and development of strategies to improve faculty research and funding success, and student learning, advising and mentoring. She coordinated undergraduate research through the NSF-funded Research Experiences for Undergraduates program. Her research examines beneficial plant-microbe interactions and the diversity of the plant microbiome, as well as the exchange between beneficial microorganisms and their plant host. Buecking earned her PhD in biological sciences from the University of Bremen in Germany. Buecking can be reached at heike.buecking@missouri.edu.

Calhoun is the state Extension specialist in soils and cropping systems and an assistant Extension professor, based at the Fisher Delta Research Center in Portageville, Mo. Calhoun earned his PhD at Mississippi State University, where he was also a teaching assistant for courses in weed science and herbicide technology. His research evaluated soil-applied herbicides and spray application techniques for their ability to mitigate herbicide resistance development in weeds. He has published a number of peer-reviewed articles on weed control, crop response to herbicides, and application technology in journals such as Weed Technology, Pest Management Science, and Agronomy. He also holds membership in both the Weed Science Society of America and Southern Weed Science Society. Calhoun can be reached via phone at 870-370-3306 or jscgvf@missouri.edu.

Channaiah joins CAFNR as a state Extension specialist in food processing and an assistant professor in the Division of Food, Nutrition & Exercise Science. At Mizzou, he will conduct research on food processing and safety, including identifying novel mitigation strategies to control pathogenic microbial contaminations in both human and animal foods. Channaiah will also lead Extension food safety training programs. He previously worked at the American Institute of Baking (AIB International) where he was the director of microbiology. He also served as an adjunct faculty member at both Kansas State University and Washington State University during that time. Channaiah is an editorial board member for the Journal of Food Protection. Channaiah earned his PhD in grain science from Kansas State University, specializing in food safety microbiology. Channaiah can be reached at lchannaiah@missouri.edu. 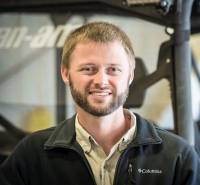 Chlapecka is an assistant research professor in the Division of Plant Science & Technology and the University of Missouri Extension state rice specialist at the Fisher Delta Research Center, through a partnership with MU and the Missouri Rice Research and Merchandising Council. He was previously a graduate research assistant at University of Arkansas, based in Stuttgart, Ark., where he conducted rice agronomy field trials. His expertise focuses on row crop agronomy, primarily rice and irrigation strategies for crop improvement, including furrow-irrigated rice. Chlapecka earned his PhD in crop, soil and environmental science at the University of Arkansas. He has given a number of presentations throughout the United States. He is a member of the Crop Science Society of America and the American Society of Agronomy. Chlapecka can be reached at jlcdtv@missouri.edu. 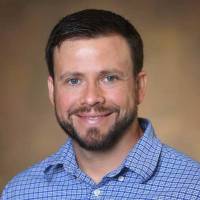 Credeur comes to CAFNR from University of Southern Mississippi, where he was an assistant professor of kinesiology. He conducted a postdoctoral research fellowship in physiology at the University of Missouri School of Medicine from 2011-14. Credeur earned his PhD at Louisiana State University. This fall, he will be teaching the introduction to exercise and fitness course for the Nutrition & Exercise Physiology degree program. Previously, he has taught courses in strength and conditioning, electrocardiography, advanced sports nutrition and exercise testing and prescription. Credeur has authored several peer-reviewed journal articles. He can be reached at credeurd@health.missouri.edu.

Jasmer joins the CAFNR biochemistry faculty after serving as a postdoctoral researcher in the department. She was mentored by both Gary Weisman and Mick Petris throughout her time as a postdoc. She earned her PhD in biological sciences from Mizzou in 2015, while also teaching courses in cellular biology and giving periodic guest lectures. Her research focuses on oral oncology and salivary disorders. Jasmer is a member of the International Association for Dental Research and the American Association for Dental Research. She can be reached at JasmerK@missouri.edu. 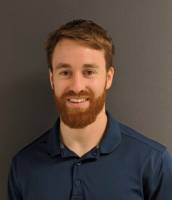 Kelleher is housed within the Division of Animal Sciences in CAFNR and the Division of Obstetrics, Gynecology and Women’s Health in the Mizzou School of Medicine. After completing his PhD in reproductive biology from the University of Missouri, he began his postdoctoral fellowship at the University of Texas Southwestern Medical Center.  His research focused on deciphering the biological roles of PARP-1 and PARP-2 in the establishment of pregnancy. Kelleher completed his undergraduate education at Cornell University and has worked with the San Diego Zoo Institute for Conservation Research as a reproductive physiology research fellow. Kelleher can be reached at andrew.kelleher@missouri.edu.

Lucas is an assistant research professor working with the National Swine Resource and Research Center. Before taking this role, she was a postdoctoral research fellow at Mizzou, working with both Randall Prather and Kevin Wells in the Division of Animal Sciences. Through her research, she aims to implement cutting-edge strategies for genetic engineering of pigs using the latest gene editing technologies. Lucas earned her PhD in biotechnology from Universidade Federal de Pelotas in Brazil, as well as both of her MS and BS degrees. She was a teaching assistant in Brazil for courses in animal biotechnology and transgenic animal reactors. In 2015, Lucas was the recipient of Science Without Borders Fellowship. Lucas can be reached at lucascg@missouri.edu.

Schenck comes to CAFNR from Michigan State University, where he was a National Science Foundation postdoctoral fellow for the past four years. Schenck earned his PhD in botany from the University of Wisconsin, Madison. He is a member of the American Society of Plant Biologists and the American Association for the Advancement of Science. His research focuses on the evolution of plant chemical diversity and the environmental pressures and stresses that plants defend against. He was the recipient of the 2019 Eric E. Conn Young Investigator Award from the American Society of Plant Biologists. Schenck can be reached at caschenck@missouri.edu. 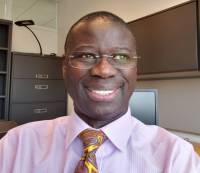 Seye returns to CAFNR as an associate research professor in Biochemistry – where he worked from 2003-09. He then worked for Indiana University School of Medicine in the department of cellular and integrative physiology. His research centers around purinergic receptor signaling in inflammation atherosclerosis. Seye has continuously served as a regular member in different study sections at the National Institutes of Health since 2013. He earned his PhD in vascular cell and molecular biology at the University of Paris in France. Seye holds memberships in the American Society for Biochemistry and Molecular Biology, as well as the American Heart Association. He has authored a number of scientific publications. Seye can be reached at seyec@missouri.edu.

Wade comes to CAFNR from University of Illinois, Urbana-Champaign, where he was a postdoctoral researcher in the Department of Crop Sciences. In addition to being an assistant professor in CAFNR, Wade will assume the role of director of the Soil Health Assessment Center (SHAC), effective Sept. 1. In this role, he will work with external stakeholders and MU Extension specialists. He has published a number of peer-reviewed articles, as well as given numerous presentations on soil health over the last six years. Wade earned his PhD in Environment & Natural Resources from Ohio State University. While at Ohio State, he was a postdoctoral researcher in the soil fertility lab, and he also served as a teaching and graduate research assistant in the School of Environment & Natural Resources. Wade can be reached at j.wade@missouri.edu.